“We value diversity of thought and respect Melissa’s personal views and the views of all employees; however, when those views create a hostile working environment, we must make difficult decisions to part ways.” 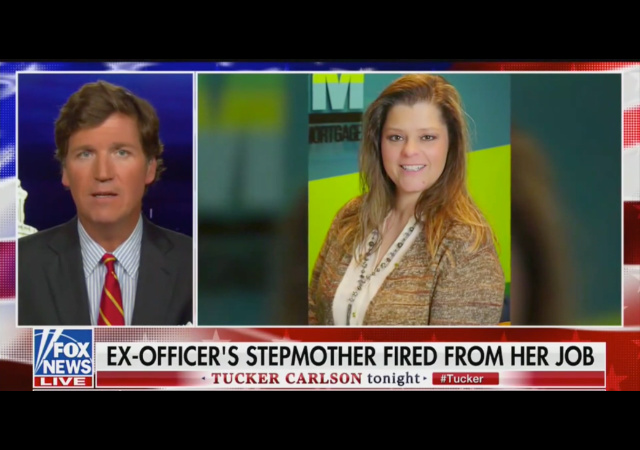 EPM is dedicated to being an organization that strives for diversity and equality. We are guided by the 23 fundamentals of the EPM Way to be an advocate for financial empowerment in the communities we serve. pic.twitter.com/ag7wkZLl13

Carlson said a “source familiar with the matter” told his show that Melissa Rolfe, the stepmother of Garrett Rolfe, was let go from an Atlanta-based company called Equity Prime Mortgage, where she had been human resources director.

“Rolfe was promised that her job was safe, but today she was told, and we’re quoting, ‘We have to terminate our relationship with you.’ No other explanation was offered,” he said.

Carlson said, “apparently,” her “only crime was being officer Rolfe’s stepmother.” He noted that Rolfe has been scrubbed from the company’s website.

Tucker Carlson reports that @Equity_Prime Mortgage in Atlanta has fired the step mother of police officer Garrett Rolfe, who was charged in the shooting of Rayshard Brooks. pic.twitter.com/RtJhNyyd2F

The Washington Examiner did not see Rolfe on the Equity Prime Mortgage website. But she appeared on the website back in May.

No one knows exactly what Rolfe said or did to make EPM fire her, but news outlets pointed out a tweet from Georgia congressional candidate Marjorie Taylor Greene.

On June 16, Greene posted a comment she supposedly received from Rolfe:

My name is Melissa Rolfe. My son is the Atlanta officer currently in the news. Our family has been completely devastated by all of this nonsense. I have heard how you feel on many topics and agree with you 100%. I pray you are victorious. Please keep our family in your thoughts and prayers.

But Republicans have moved away from Greene due to racist video posts on her Facebook page.

She needs to find great legal representation, as Nick Sandmann has done in his situation.

Do we in fact know that the posts were “racist”?

It’s a Kaufka tautology. Anything she says is racist, because she’s a racist, because we say so. She could have posted something uplifting like “All people must be held equal under the law” and that would be considered just as vile as anything you can imagine.

They did not quote her. That is usually a give-away, that what she really said was unobjectionable.

If some dimwad says it is racist, it must be.

This isn’t unusual. It’s actually one of the first things that starts happening to families of anyone accused/arrested for capital murder. Remember that is the charge that DA is going for. In my personal experience the roommate of a friend who was arrested and charged with capital murder had his renewal of his lease on his apartment refused and was unable to find another place to rent to him because of what the apartment complex said. He had a spotless record for rent and left the apartment immaculately cleaned. He ended up having to live with relatives for a year and leave off ever living at the other place to be able to rent again. The girlfriend of the man involved had her workplace called by the DA and that DA pressured her workplace to fire her by stating that she had been ‘uncooperative’ with him.

DA’s do this. It is a hellish part of the experience of knowing someone closely who is arrested for murder. It isn’t right, or just, but it happens.

This is just like the Zimmerman case, where they attack the family. There is a very clear pattern of black racism on everyone.

See Richard Jewel to understand how this will cost the mortgage company. In fact maybe the DOJ should be looking into the discrimination aspect.

Barr….do something? Surely you jest!

I guess this doesn’t apply to stepmothers. They are to be punished.

They value diversity (i.e. color judgments), not diversity of thought. The former is a doctrine of exclusion under the Pro-Choice, selective, opportunistic religion (or its relativistic cousin “ethics”), of the Progressive Church, and normalizes witch hunts and warlock trials (e.g. trial by press, em-pathetic appeals, summary judgments) when politically congruent.

–And here comes the reality behind the Game of Thrones paraphrase “Whatever anybody says nice before the word ‘But’ is meaningless.”

“when those views create a hostile working environment,”

–i.e. You’re not a problem, but some vengeful little twit posted our company’s name and number where any number of loathsome trolls will proceed to hammer us in all kinds of unspeakable ways, because they are loathsome creeps, not because of you.

“we must make difficult decisions to part ways.”

–Look, we’d like to fight for your right to remain employed here, but that’s going to take a lot of effort, and if we stick up for you, those cretins will probably stick *us* on the list too, and we don’t need that kind of crap when we can just pass you a pink slip.

We … respect Melissa’s personal views
Umm, no, you’ve just proven that you don’t.

I’m a GA voter who will pull the lever for Greene later this year.

I know of no Republicans distancing themselves from her …

Now we have corruption of the blood?

Mary, what kind of bullshit is this?? SHOW us the “offending” posts and if you cant delete this bullshit sentence!

As Ace points out, when the fake media makes a claim of racism and then DOES NOT show you the offending material it’s because the thing they claim doesnt actually exist.

So come on Mary, show us the evidence or DELETE this sentence!!

This article has some of the details:

Looks to me like yet another case of weak-kneed Republicans being stampeded into an overreaction.

Not surprising the GOPe is trying to throw away the race, just like they did with Roy Moore and almost did with Trump. Like a trained monkey and it’s organ grinding partner, the GOPe does the dance while the Communists play the tune.

Roy Moore was toxic. The Alabama voters declined to send an embarrassment to the senate. I don’t know anybody who truly wanted to vote for his Dimocrat opponent, but many said they wouldn’t want Moore in office.
.

Gee, if they still had a decent HR department, they would have been advised to never publicly discuss why they fired an employee.

Is this legal? Does she have a lawsuit worthy of filing?

Either way this is bad. Now we are in the process of attacking families for the actions, legal or not, of other family members.

I fear this is not going to end well. We are now head counting and drawing up “teams” and when we reach a critical mass the shooting will start.

I hope that I’m wrong on that last part but I’m losing faith in this country that we will pull back from the brink.

(AFAIK the officer who shot Brooks in Atlanta was 100% justified)

Ok, let me try again. This experience is not one ‘most’ people go through. It is reasonable to think, because you are seeing it in ‘this’ case, which has the news, that it is NEW. It is not. I’ve been working in opposing the death penalty for a number of years. As such, I have seen, and been through capital cases.

Reality one: No matter the depravity of the crime if the accused is poor they are more likely to have the death penalty perused against them. The reason behind this is they cannot afford a good lawyer (think 10K retainer to even start the process) therefore the DA is more likely to get a conviction and look good.

Reality two: If the death is highly visible, as in this case, or the accused is a and the news is likely to cover the trial in such a way that the DA will achieve notoriety and positive positioning for the goal of advancement, then capital murder will be on the table at least in the beginning even if the person charged ‘can’ afford good lawyers.

Reality three: The family and friends will be ostracized. If they do not immediately bow down to say whatever the DA desires them to say that DA will attempt in every way possible to destroy their life/job. Most of the ways they will peruse are only marginally legal but as long as they walk the line they will get away with it.

None of this is new. You just haven’t personally experienced it before.

That would be a tough legal battle. GA is a right-to-work state.

Funny how that only ever works in one direction, though.

Go to the source: barack obama.

they’ll have to kill me first.

i will not take a knee.

This is why we need to abolish the police. The only way we can fight the left is to let them kill each other. Shut down the police until their numbers are manageable.