Hulu Criticized After Removing Golden Girls Episode: ‘They Were in Mud Masks, Not Blackface’

Hulu Criticized After Removing Golden Girls Episode: ‘They Were in Mud Masks, Not Blackface’

“This was actually a great episode about racial and age perceptions, one of the ones that show how much Golden Girls was ahead of its time during first run.” 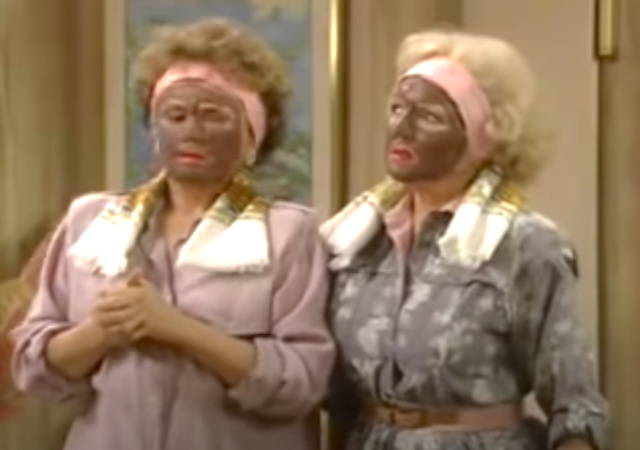 This reminds me of the blog I wrote about BET Robert Johnson’s comments on white people tearing down statues, removing movies and shows, and apologizing for their race.

Johnson wants white people to reach out and ask black people what they want and need.

Or how about the white people in New York City who think the black people in Harlem hate the police even more than they do? They obviously didn’t ask because those in East Harlem said it would be “suicide” if the NYPD disbanded.

Maybe now they will because Hulu is receiving criticism for removing a Golden Girls episode for supposed blackface.

Hulu has removed an episode of The Golden Girls that contains a scene in which Betty White and Rue McClanahan are mistaken for wearing blackface.

“Mixed Feelings”, episode 23 in season 3 of the sitcom, aired in 1988 and shows Michael (Scott Jacoby), the son of Dorothy (Beatrice Author), planning to wed a much older Black woman, Lorraine (Rosalind Cash).

Dororthy is concerned over the age difference while Lorraine’s family disapproves of their daughter marrying a white man, and thus the two families attempt to end the marriage. In the episode, Lorraine’s family finds Rose (Betty White) and Blanche (Rue McClanahan) trying a new mud facial treatment, and as they greet their family, Rose says “This is mud on our faces, we’re not really Black.”

It’s not even blackface! It’s a mud mask! But those in charge don’t use their brain and jump the gun, which makes them come out looking like idiots.

Then again, Hollywood is so full of itself that nothing will persuade them from “doing the right thing” because this is the racial justice and reform blacks want, right?

Maybe Hollywood and the apologetic whites should take Johnson’s advice because like I said, black people, even on the left, criticized this move.

To be clear: I’m not “attacking” Hulu. I would just hate for the seriousness of this moment and movement to get lost in symbolic (and sometimes silly) overcorrections. Impact on real lives should be the measure of any change worthy of a PR push.

Removing this episode is weird, counterproductive and stupid. It diminishes the effort to actually end racism. It’s just so dumb.

Yeah, these companies and media platforms are trivializing the situation by sending the message that our demand for justice is as petty as removing episodes of the Golden Girls off a streaming platform. This is a calculated effort to cheapen our message. https://t.co/iAr5oVazkT

omg. okay, THEY WERE NOT EVEN IN BLACKFACE IN THAT EPISODE. i don’t even need to read it to know which one they’re talking about. Dorothy and the girls found out her son, Michael, was marrying a black woman. Blanche and Rose were wearing mud masks, PLEASE. #GoldenGirls

Y’all pulled that Golden Girls episode that wasn’t even blackface. Right now it’s feels very much like the entertainment industry and culpable white people within it are using these performative gestures to get out of doing the work that needs to be done.

i promise you as a black person not one black person i know including myself thought The Golden Girls we’re doing blackface, that episode was actually about acceptance.

This was actually a great episode about racial and age perceptions, one of the ones that show how much Golden Girls was ahead of its time during first run.

But yes, let’s get rid of the “blackface” episode.

??? WHERE IS THE SWEEPING LEGISLATION AGAINST POLICE BRUTALITY

Black chick here. LEAVE THE GOLDEN GIRLS ALONE! This episode was in NO WAY Blackface. Don’t start with the overreaching. Krikey. ??

my good sisters the golden girls would NEVER do blackface. please stop attempting to besmirch their names, @hulu!

Diversity (i.e. color judgments), not limited to racism, is a progressive condition.

Really shows you how there is no leadership at any of these companies these days. Someone probably emailed and complained and HULU went into panic mode instead of actually looking at the episode and realizing it’s not even close to blackface.

The irony is that Susan Harris (the creator of Golden Girls) is pretty far left in her political views. She use an earlier show she created (Soap) to push the envelope on political correctness, and the Golden Girls was only slightly less obnoxious.

All those execut-weinies need to get the chop, which means canned.

Those communist-Chinese owned execut-weinies need this same thing to happen to them.

Dinesh D’Souza
@
When you watch these rioters closely, they are a puny bunch.

Their aggression is driven by the inaction of the authorities.

It takes very little force to disperse them.

It’s like scattering roaches. You apply the repellent, and the roaches run for their lives

Heard a story on ABC affiliate in Philadelphia of a restaurant manager who got complaints from white customers that a group which included an Eagles player were making them “uncomfortable”. After the manager took the complaint to the other group, that group complained to the chain headquarters who fired the manager and apologized.

Guess there are limits to being “uncomfortable”

Hint: if you are the manager and want to keep your job, pull the fire alarm and clear the tables of both parties when they are all outside.

This is one of the great demonstrations about why I absolutely refuse to buy ANY movies or TV on digital media.

How long until Amazon decides something like Blazing Saddles is ‘problematic’ and issues ‘refunds’ that you DON’T HAVE A CHOICE to accept.

That one tweet: “WHERE IS THE SWEEPING LEGISLATION AGAINST POLICE BRUTALITY”

I hope someone answered her and told her that the Democrats filibustered it.

And they’re not doing it to make black people’s lives better. They do it to make themselves feel better, and to look better to one another.

They have never cared what their professed beneficiaries thought or wanted. It’s never been about that, and never will be.

If you want a problem solved or a wrong righted, you’re not going to get what you want from someone immersed in their own feelings.

That last clip is no worse than what I heard from the mouths of Jewsish mothers about no son of theirs was going to marry a shikseh.

Those Hulu cats are dumber than a box of rocks and they just have to keep proving it.

Some crank on soros’ payroll called and complained.

Amazing what passes for integrity.