Argues they only have one full-time employee 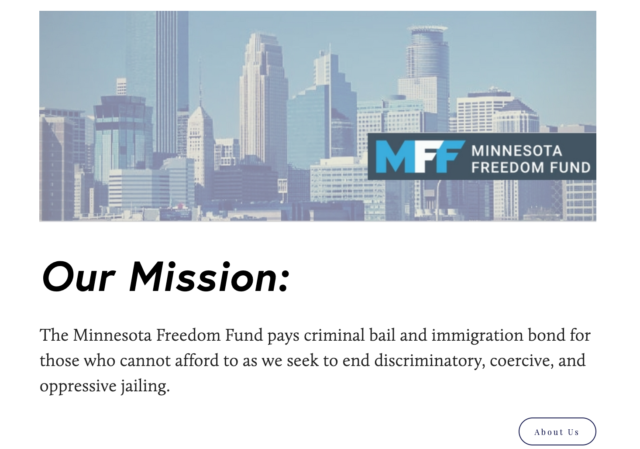 According to a report in the New York Times, the Minnesota Freedom Fund is a hot mess.

Thanks to celebrities like Justin Timberlake, Steve Carell, and Seth Rogan, the MFF raked in over $30 million in donations, promising to bail out protesters and rioters who were arresting while protesting (or destroying things in the name of) George Floyd’s death. So far, the MFF has dispersed approximately $200,000 of the more than $30 million raised.

The Minnesota Freedom Fund, a bail fund that earlier this month only had one full-time employee, has raised more than $30 million alone since Mr. Floyd’s death on May 25. Its name became ubiquitous on social media as activists and celebrities posted screenshots of their donations to the fund and implored their followers to match them. (Bail funds raise money to release those who have been jailed, so that they can await trial freely.)

On Monday, the fund announced that it had contributed “well over” $200,000 to bail payments in the weeks since the protests began. That revelation followed an open letter addressed to two other organizations that had seen a surge in donations, Black Visions Collective and Reclaim the Block, asking that the nonprofits be more transparent about fund-raising and the allocation of funds.

After the Minnesota Freedom Fund shared the $200,000 figure, several commenters on Twitter expressed disappointment that such a small portion of the donations had been distributed. Some also noted that the fund’s board, as it had been depicted on its website, appeared to be composed entirely of white people. (The web page that lists the organization’s staff has been removed at least twice this month as the board’s membership has shifted; there are currently seven members.)

But this story gets super weird. The fund has one full-time employee, Tonja Honsey. According to a FB page run by two “native women local to Minneapolis,” who wish to remain anonymous, Honsey is another Rachel Dolezal (white chick identified as black and even served as NAACP president in Spokane, WA).

But the organization was in a particularly difficult position when it found itself in the spotlight. It had already been grappling with questions about the leadership of its only full-time employee, Tonja Honsey.

In April, a page called “Tonja Honsey – Native Rachel Dolezal” appeared on Facebook. Its administrators alleged that Ms. Honsey, the fund’s executive director, was lying about her identity as an Indigenous woman, comparing her to Ms. Dolezal, the former Spokane, Wash., N.A.A.C.P. president who posed as a black woman for years.

The page’s administrators called for Ms. Honsey to step down from all her organizing roles. The administrators said they would not identify themselves to The New York Times because of concerns about their own safety, but said they were two native women local to Minneapolis.

Ms. Honsey said in an email that she was “not able to talk to media at this point,” but that the Facebook page was “untrue.” She pointed to posts on the page made by her mother, who wrote that her daughter was Indigenous “on her grandfather’s side.”

The Facebook page also carried a message that Ms. Honsey had been ousted from the organization for issues related to those raised by the page.

Ms. Honsey said she could neither confirm nor deny whether she was still involved with the fund.

“Because we are in active arbitration, I am unable to comment about that,” said the Minnesota Freedom Fund’s current board president, Octavia Smith.

Ms. Smith and her predecessor, Greg Lewin, who was the board’s president until early June, said that turmoil within the organization had detracted from its overall mission.

“Our capacity is taxed for sure,” Ms. Smith said. ”Our capacity is definitely taxed.” She added that before the nationwide protests, “our staff was only a staff of one.”

Mr. Lewin said that the internal issues — which he said he was unable to comment on in detail — did not inhibit the organization’s ability to get people out of jail, but that it did “hamper our ability to move and collaborate in the community.”

Mr. Lewin said that the organization typically identifies those in need of bail money with the help of local public defenders, and that its process depended on lawyers’ involvement. That prevented the disruption related to Ms. Honsey from directly affecting the organization’s work, he said, but it also made for a more limited process than many online might have expected.

Lastly, a note on the Fund’s board, because it’s just too perfect (NYT, again)”

The Minnesota Freedom Fund was founded in 2016 by Simon Cecil, then a master’s student at the University of Minnesota. Ms. Smith, a friend of Mr. Cecil’s, was the fund’s first employee, and became its board president in 2018. In 2019, Ms. Smith stepped away from her regular work with the fund but remained listed on its website as “emeritus board president.”

On May 31, though, she briefly cut ties with the organization altogether.

“I had some disagreements around leadership,” she said. “That is probably all I’m able to say.”

Ms. Smith, who is black, was asked to come back to the board “in order to steward a just transition of resources and power,” she said. On June 11, she was reinstated as the board’s president.

“Our board has historically been predominantly white, and we recognize that that’s a problem,” she said.

Under scrutiny, the MFF is attempting to explain their case on Twitter… and it is not going well. At all.

Good morning. Let's talk about "where the money went" and where it's going. All protest-related bail so far that has come our way has been paid and we're going to keep that up. At the onset of all this we set aside $10K for protesters, because it's what we had – not enough (1/??)

We stand ready to pay all protest-related bail (that isn't for Nazis – we're here for community).

But what about "catch-and-release" protesters? Many people had no bail but were scooped up and charged, and now have ongoing legal costs.

Part of fighting pre-trial injustice means making sure people aren't pleading guilty on bullshit charges, like being hit with Riot while on a friend's porch, which happened.

We are working with a group of arrestees who will help coordinate support for those fighting charges.

"Support" starts with legal representation, court fees, and transportation, and starts with $150k. That can scale up as the project gets set up and costs start getting documented. We aren't going to leave folks hanging, just like we aren't going to stop paying bail. Speaking of,

THAT'S where the money is going that doesn't go to protesters: bail. We are a volunteer community fund who until last month was doing all we could to pay a handful of misdimeanors each month, steadily paying, getting funds back, raising more $ when we could, doing it again.

This is the part where transparency gets exciting. We get to talk about all the people sitting in jail who didn't take plea deals, sitting in jails pre-trial. We can share about the race and class disparities of those jailed pre-trial. And we can take action we'd only dreamed of.

To say again: we are paying, and have paid, all protest bail that's come our way. There are a lot more people in jail on bail. Now, we can help on a scale impossible last month. We want to spend this money down to get people out of cages (ICE too) and we want to do it right.

But at least they do a better job than the Clinton Foundation, the standard by which all left-wing charities ought to be judged.

The Clinton Foundation defines the very highest standard in liberal charities, by that I mean the lowest, with verily more vigorous virtual virtue than virtually any other virtuous virtuosity in virtual online reality.

Just ask the woman over there in the blue dress.

Well, you DO set a high bar there…

Gee — they’re afraid of the mob that they incited. Can we say “The weavers in the web that they made”?

making sure people aren’t pleading guilty on [false] charges, like being hit with Riot while on a friend’s porch, which happened.

Correction: “on a friend’s porch”.

Are you sure? LOL

Best to not dig too deeply. If the money was spent on bail, that would be horrible. Best if the scammers vanished into the night, the money never seen again.

So sex is mutable but race is not?

So who gets stuck if the Fund pays their bail and they jump bail? Will the Fund hire Dog the bounty hunter to go find them? That would be fun to watch.

Even if the Fund forfeits the money when they jump bail, they will still be fugitives with Failure to Appear warrants. It doesn’t look like the Fund is in any position to help with their legal representation.

The district attorneys are letting go without charges as fast as possible.

Perhaps the Freedom Fund is under the same management as the Democrat Iowa caucus. They are in training to run the country.

Rather than virtue signal the celebs and other high profile libs should be moving into the inner cities, sending their kids to schools there and being useful such as opening supermarkets.
How come they never do useful things instead of hiding behind their gated communities and giving each other fake awards?

A couple million to the DNC and suddenly the DOJ, FBI and the Minnesota AG will lose interest. The rest in their pockets. Right out of the David Brock school for parasites.

I’m not sure how peons overseeing a 30 million dollar fund thinks that only having 1 FT employee is a good excuse.

notamemberofanyorganizedpolicital in reply to healthguyfsu. | June 18, 2020 at 9:44 pm

Can’t be much to manage when they donate an excess of 99% directly to the DNC can there?

Here’s a great idea from a patriot.

For all these people who don’t want any police, I’d love to meet with American Airlines, Delta, and Southwest and make a deal to fly them to countries that don’t have police. I want them to be happy! “

We are better than this-let’s unite together! What we need to do is fill out our Census papers to let people know we exist & register to vote and choose people who can make a change!

Bet lots of those same Leftist celebs get caught by this.

This is a straight up why bother. Excessive bails will be quickly reduced, charges vacated and personal recognizance. Save the money for buying arms and armor. Although I expect they’ll get it back channel when they become the neighborhood safety committee or community reconciliation council.

Can you say “money laundering”?
Maybe the fund is being handled by the clinton foundation.