BET Founder Robert Johnson: Democratic Party has Moved ‘Too Far to the Left’

BET Founder Robert Johnson: Democratic Party has Moved ‘Too Far to the Left’

“I give the president a lot of credit for moving the economy in a positive direction that’s benefiting a large amount of Americans.” 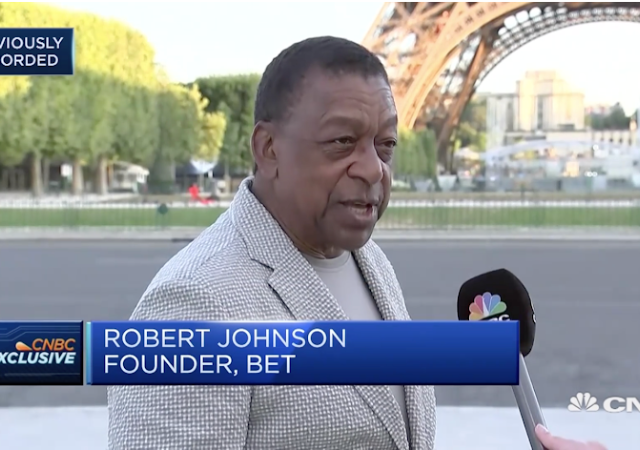 “The party in my opinion, for me personally, has moved too far to the left,” Johnson, the founder of cable network BET and RLJ Companies business network, told CNBC’s Hadley Gamble Tuesday.

“And for that reason, I don’t have a particular candidate (I’m supporting) in the party at this time,” he said. “I think at the end of the day, if a Democrat is going to beat Trump, then that person, he or she, will have to move to the center and you can’t wait too long to do that.”

Johnson supported Hillary, but has since shown admiration over some of Trump’s policies, especially the economy:

“I think the economy is doing great, and it’s reaching populations that heretofore had very bad problems in terms of jobs and employments and the opportunities that come with employment … so African-American unemployment is at its lowest level, ” Johnson said.

Johnson became the country’s first African-American billionaire after selling Black Entertainment Television in 2001, according to Forbes.

“I give the president a lot of credit for moving the economy in a positive direction that’s benefiting a large amount of Americans,” he said. “I think the tax cuts clearly helped stimulate the economy. I think business people have more confidence in the way the economy is going.”

Despite the U.S. dispute with China over trade, Johnson said that “overall, if you look at the U.S. economy … you got to give the president an A+ for that.”

Johnson basically repeated what he told CNBC in April 2018 when he reminded people that Trump’s economy put black people back to work. He said at the time:

“When you look at that [January report], you have to say something is going right,” said Johnson, a Democrat and founder and chairman of The RLJ Cos.

If you look at the jobs reports since then, which I have covered, the unemployment rate among black men has remained low and dipped lower most months.

Johnson told CNBC he doesn’t like Trump’s brash personality, but he offered a dose of reality to those who hate Trump:

“A lot of people are not going to like that style,” he said, “but when he says he’s going to try to do something economically, you have to give him credit for taking some specific steps to do that.”

“At the end of the day, the American people are looking for someone who can deliver economically and deliver on opportunities,” he said.

Thanks for this Mary.

sarbez in reply to notamemberofanyorganizedpolicital. | July 10, 2019 at 9:45 am

I love your use of SOTH! Sounds like a creature in a horror movie….and she is.

Someone really needs to grill BET media Johnson on this issue.

It’s Not Your Imagination: The Journalists Writing About Antifa Are Often Their Cheerleaders

More at: ACE OF SPADES

“Antifa Imposes Rules on the Media, Which the Media Apparently Obeys
—Ace of Spades

I don’t remember the media publishing too many pictures of antifa violence. And it turns out, Antifa gives orders to the media not to publish such pictures.

I don’t remember hte media publishing many pictures of unmasked antifa criminals, despite the fact that local police departments publish these photos, and the conservative alternative media does publish them.

So it seems on both counts: Antifa commands, and their media allies comply.”

I’m perplexed. With America plagued by “systemic racism” like it is, how do this guy manage to become a billionaire?

And by “opportunities” he’s not talking about another fucking handout!

Most Americans are not diversitists. We don’t indulge color judgments including racism.

I keep hearing these stories about how the Democrats have ‘moved too far to the left’ from various people. I wouldn’t be so sure about that.

I think most people would be shocked just how far leftward we’ve leaped. We’re galloping straight past marxism. We’ve been ineffectual at stopping it. The Long March Through the Institutions is paying off.

So now he’s an Uncle Tom?

Wait? Is he actually paying attention to results instead of tweets? Doesn’t he know that that’s just not done these days! This man is a terrible Democrat!

He is on his way to being an independent, who knows how he might evolve over time.

Saw a young black guy on TV yesterday say Trump may get a bigger percentage of black male votes than McCain and Romney put together.

I’ll believe it when I see it.
Over the years, particularly since the early ’60s, CPUSA has made great efforts to seduce the young black male into the fold; they never made as much headway with the intelligent young black female.

Tell us what is “democratic” about this bunch of communists & anti Americans.

notamemberofanyorganizedpolicital in reply to southern commenter. | July 10, 2019 at 5:21 pm

They are “democratically Demonic?”

Can I have a Amen

How long before they start calling him a White Supremacist?

Wonder how long it will take him to realize the Democrat Party has long since stopped caring about Blacks entirely, banking the entire future of their Party on illegal aliens instead.