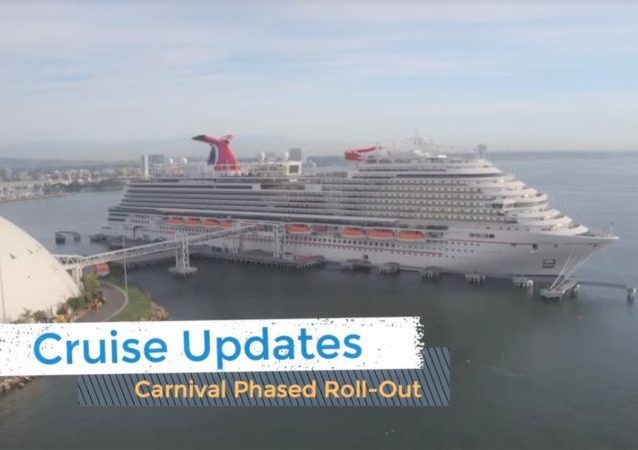 Perhaps this is another sign of disdain for pandemic-phobia.

Many eyes are on the cruise line industry as it reels from the impacts of coronavirus. Earlier this week, Carnival Cruise Lines announced it was scheduling its return to the sea for August 1, 2020. That’s just a few days after the Centers for Disease Control and Prevention is set to lift their “do not sail” order. Cruise Planners, an American Express travel franchise, reports that bookings skyrocketed 600% over 3 days after the announcement. That was in comparison to the 3 days prior to the announcement. Year-over-year, the company said bookings saw a 200% increase.

Of course, this is largely dependent on the CDC lifting its current sailing restriction currently in place until July 24. Carnival said earlier this week that cruises “could potentially operate if it was determined that cruising can resume.” The cruise company announced possible cruises departing from Miami, Galveston, and Port Canaveral. All other North American and Australian homeport cruises are cancelled through August 31.

Georgia reports the lowest number of COVID patients in a month.

Remember all the panic reporting that Georgians were going to have a massive uptick in deaths after Gov. Brian Kemp opened the economy, including hair salons and tattoo parlors?

Georgia Gov. Brian Kemp announced Saturday that the state had the lowest number of hospitalized coronavirus patients it has seen in just over a month.

Kemp moved forward with his plan to reopen the state late last month, despite initial opposition from President Trump.

“Now, with favorable data and approval from state health officials, we are taking another measured step forward by opening shuttered businesses for limited operations. I know these hardworking Georgians will prioritize the safety of their employees and customers,” Kemp previously tweeted. “Together, we will weather this storm and emerge stronger than ever.”
“Today also marks the lowest total of ventilators in use (897 with 1,945 available). We will win this fight together!” he added.

At this point, hair and nail salons have become very essential for me! Hoping California adopts the Georgia model sooner rather than later.

Under 1% of MLB employees test positive for virus antibodies.

And I can testify that Major League Baseball is very essential for my colleague, Mary Chastain.

Just 0.7% of Major League Baseball employees tested positive for antibodies to COVID-19, the illness caused by the new coronavirus.

Results were based about about 5,600 completed records from employees of 26 clubs. Samples were obtained on April 14 and 15.

“It allows us to get a peek of the nation-wide prevalence,” said Dr. Jay Bhattacharya at Stanford, one the study’s leaders, said Sunday.

The start of the baseball season has been delayed because of the virus outbreak. There’s no timetable for when the season might begin.

Sixty people tested positive in the raw data, and adjustments were made for false positives and false negatives. Bhattacharya said the survey had a 0.5% false positive rate.

Yes, the pandemic experience in San Francisco is the nightmare we expected.

San Francisco is being sued by a law school and residents and businesses in the inner-city Tenderloin District who argue sidewalks are “unsanitary, unsafe, and often impassable” as homeless people crowd streets amid the coronavirus pandemic.

The number of tents and makeshift structures in the Tenderloin has tripled since January, as homeless shelters are forced to operate at low capacity in order to enforce stringent social distancing requirements, reports say.

The federal lawsuit, filed last week in part by the University of California Hastings College of Law, does not seek financial damages but instead demands the city clean up streets littered with drug needles and human waste. The litigants are also seeking help for people living in sidewalk tents, saying they are at increased risk of COVID-19.

The neighborhood might want to consider bringing in America’s new Mr. Clean: Scott Pressler (aka The Persistence). He was in San Francisco earlier this year to clean and was greeted with protesters.

WaPo Claims Dr. Birx Said ‘There is Nothing From the CDC That I can Trust’ During Task Force Meeting

Today’s update ends with an intriguing revelation that one of the leading figures in the coronavirus fight is less than pleased with information coming from the Centers for Disease Control and Prevention (CDC).

“There is nothing from the CDC that I can trust,” she told CDC Director Robert Redfield, two people familiar with the meeting told the newspaper.

The Post reported that Birx and others feared that the CDC’s statistics on mortality rate and case counts were inflated by up to 25%.

Birx later told The Post in a statement that “mortality is slowly declining each day.”

“To keep with this trend, it is essential that seniors and those with comorbidities shelter in place and that we continue to protect vulnerable communities,” she said.

One more time. How does the CDC get away with putting mandatory restrictions on anything?

Cause their fruits have caught the Chinese Wuhan-Killer Flu.

Goat And Paw Paw Test Positive For Coronavirus In Tanzania

‘There is something happening. I said before we should accept that every aid is meant to be good for this nation,’ says president

??The litigants are also seeking help for people living in sidewalk tents, saying they are at increased risk of COVID-19.””

Carnival? Fine. Now, we can get sick on spoiled buffet food again.

I’m glad they are opening, but I’ll stick to the cartel run resorts in Mexico.

My vacation needs are simple: a little cabin or cottage near a lake or stream; a stack of books or a loaded Kindle, some music, and just the wind blowing through the trees.

The appeal of a cruise ship is lost on me. The constant noise of parties; loud entertainment that I am fairly certain will not suit my tastes; ports of call that include dumps like San Juan. No thanks. MAYBE an Alaskan cruise, or one of those Danube things, but not what Carnival offers.

a stack of books or a loaded Kindle
I did not read that as “books” initially (but still starts with “bo…”). When I figured out it was a Kindle you were keeping loaded, my brain backed up and read the right word. Heh.

To me, it’s like being on a hugely overcrowded prison with a bunch of people I probably won’t like with the added option of seasickness.

The are running a HUGE sale. Buy one week – get 14 extra days for free!

Don’t know about a hospital stay, but you get free medical care!

One of their ships has opened some themed restaurants. One of them is based on a format of music from two famous black enterrtainers. It’s called Sam ‘n’ Ella’s.

No one from Michigan will be on a Carnival Cruise. Is it true that Governor Wreteched Gretchen Half-Whitmer plans to keep her citizens in detention for being bad boys and girls?

For the smallest thing, he will reach out to you.

The more money it receives, the less money it spends on its core mission.

I don’t believe ANYTHING coming out of the CDC. Their credibility is just one small step better than the WHO.

Like I said. Unemployment will be back to 5% by end of year.

I would not be surprised. Like everything else about the Wuflu, the long-term negative economic consequences were almost certainly wildly exaggerated.

When the free money is gone, people will return from flu-cation.

My cousin loves going on cruises with thousands of other people. I’d sooner chew tinfoil.

Perhaps this is another sign of disdain for pandemic-phobia.
“Phobia” about rampant sickness on a cruise ship really isn’t unreasonable (definition of ‘phobia’) – even before Winnie The Flu.
Just saying.

600% increase in bookings? Math is hard. If they had 10 bookings for the month of August, and now they have 60 bookings–that’s a 600& increase. I’ll wait and see what the hard numbers are.

The upside:
book a 1 week cruise, maybe it lasts 6 weeks

SEDRO-WOOLLEY, Wash. — A grandma was arrested in Sedro-Woolley after taking a stand against Gov. Jay Inslee’s “stay-at-home” order.

Thursday, she says she didn’t want to standby watching any longer.

“I want the parents in our community to make the decisions to whether or not they should bring their children out to play,” said Taxdahl.

She came down to Riverfront Park and removed caution tape surrounding the playground equipment.

“I’m advocating for our poor kids that have been locked up for fifty days,” she said.

Taxdahl posted to Facebook, telling people to come to the park, offering free cotton candy to the first 50 kids…..