“I’d say I’m surprised, but it’s sadly par for the course for Democrats to take the black community for granted and brow beat those that don’t agree.” 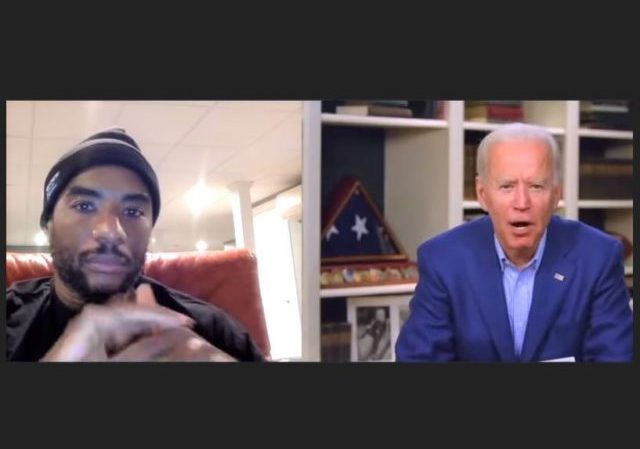 Joe Biden has always been the king of gaffes, but on Friday he managed to surprise even seasoned political junkies who have been following this stuff for years.

During an interview with ‘Charlamagne Tha God,’ Biden said “If you have a problem figuring out whether you’re for me or Trump, then you ain’t black.”

If you missed it, here’s the clip:

.@JoeBiden: “If you have a problem figuring out whether you’re for me or Trump, then you ain’t black.” @cthagod: “It don’t have nothing to do with Trump, it has to do with the fact — I want something for my community.” @breakfastclubam pic.twitter.com/endvWnOIV2

Biden adviser Symone Sanders tried to spin it as an attempt at humor:

The comments made at the end of the Breakfast Club interview were in jest, but let’s be clear about what the VP was saying: he was making the distinction that he would put his record with the African American community up against Trump’s any day. Period.

Biden has since apologized:

JUST IN: In a call with Black business leaders, @JoeBiden apologizes for his AM comments to @cthagod: ”
“I should not have been so cavalier. I’ve never, never, ever taken the African American community for granted.” (more)

Too late. The damage is done.

The comments sparked a huge reaction on social media. Here are some noteworthy reactions from Twitter.

1.3 million black Americans already voted for Trump in 2016. This morning, Joe Biden told every single one of us we “ain’t black.” I’d say I’m surprised, but it’s sadly par for the course for Democrats to take the black community for granted and brow beat those that don’t agree.

A take for you: Joe Biden’s line, “if you don’t prefer me over Trump you ain’t black,” inadvertently manifests a central tenet of intersectionality. It’s not about being part of one group or another, it’s about holding the correct set of progressive attitudes.

If you didn’t support Hillary in 2016, #YouAintWoman

If you don’t vote for @JoeBiden in 2020, #YouAintBlack

If you still can’t see that the Democrats are exactly what they accuse everyone else of being, #YouAintSmart #Trump2020 #BLEXIT #MAGA #KAG

Hey, @JoeBiden! We are 100% Black and 100% NOT VOTING for YOU! #YouAintBlack#BlackVoicesforTrump pic.twitter.com/RkXHseC5WE

Dementia often reveals the true person within. #PlantationJoe has been a condescending blowhard since his proud days of beating up “bad dude” Corn Pop down at the pool. His latest #YouAintBlack racist filth is not a gaffe. It’s the demon emerging from a rotten soul.

Biden: ‘If You Don’t Let Me Sniff Your Hair, You Ain’t A Woman’ https://t.co/Q1y6PpIWLE

Harris Faulkner of FOX News offered some amazing commentary after Marie Harf (formerly of the Obama administration) tried to spin it for Joe:

“See that guy right there, Strom? He ain’t black” pic.twitter.com/KBQQMSlrPm

“I gotta tell ya, Ralph. That guy over there? Yeah, he ain’t black” pic.twitter.com/Z9PjYITqGB

When Biden says #YouAintBlack if you vote for Trump. pic.twitter.com/CL3KxAhbun

Joe Biden on Obama in 2008:
“I mean you’ve got the first, sort of, mainstream African-American who is articulate and bright and *clean* and a nice-looking guy. I mean that’s a storybook, man.” pic.twitter.com/EQXQubVanA

Joe Biden after telling the audience #YouAintBlack if you vote for Trump pic.twitter.com/bkGnF8nMxs

My own two cents:

To anyone who’s shocked about Joe Biden’s #YouAintBlack comments, I’d just like to remind you that in 2012 this is what he said to an audience of African American voters about Republicans:
“They’re going to put y’all back in chains.”
This is nothing new for him.

Do you think anyone in the media will ask Obama for a reaction?

I take it that Joe Biden is also claiming after he apologized about you’re not black if you don’t vote for me, that the NAACC endorsed him – after his apology.

The NAACP is denying they have endorsed Joe Biden.

JusticeDelivered in reply to notamemberofanyorganizedpolicital. | May 23, 2020 at 5:34 pm

Welfare queens of all shades will vote for Biden, that is if they bother to vote at all.

The truth is that Democratic Party policies have been an unmitigated disaster, basically fostering permanent, multi-generational poverty and dependence.

How many lives have been squandered?

We need to eradicate the disreputable culture which has risen as a result of disastrous public policy.

If you don’t vote for your fellow black man Joe Biden, then you’re not black at all.

It’s turning into a major disaster for not just Joe but the left as I think a lot of black American’s who were still on the fence for the Democrats are finally seeing the party’s true colors in the responses of some of the people who are trying to gloss over Joe’s statement and say it’s not a big deal.

People are finally waking up to the fact that the Dems just use people to get votes.

The most depressing thing about watching Joe Biden self-destruct, is that there are so many people who are determined to pretend it’s not happening.

It’s nothing new. They pretended that Hillary Clinton didn’t break the law, despite the FBI stating that she did so on national television, because apparently, the political decision not to prosecute somehow changes reality.

Dim-witted Biden is gonna put us all in chains…

I’m surprised that Joe didn’t start talking in a black, southern dialect like creepy Hillary did whenever she condescendingly spoke to black groups.

But there’s plenty of time for him to pull that one.

Slow Joe Biden is, and always has been, a horse’s ass.

A side note: how presumptuous are you to call yourself “Charlemagne the God”?

You left out one key element…..”tha”. The butchery of proper language must continue, you “boojie” insensitive lowlife! /sarc

Charlemagne is spelled incorrectly as well.

This is so bad that I suspect it is done deliberately as part of a deal not to prosecute Obama and Biden, and to allow the agencies to survive.

Nothing would surprise me, but it sure looks like Biden is running to avoid prosecution.

Looking for that insanity plea, there Joe?

Joe’s used too many sanity wipes.

Nice meme of the funeral dance

The DNC has to hide him and ride him until the convention ‘cuz if he drops out now they have to play wack a mole with Bernie and the Bros.

Every election the Democraps promise the Sun, Moon, and Stars to the Black Community and every time they give them nothing and screw them post election until it is time for more fake promises. It doesn’t matter what Biden promises to do as we have all seen the results for the past 40 years (for Biden) and longer for the Democrap party. Trump has kept his promises and actually made a difference for The Black Community and Everyone else.

I will not be voting for Biden as I don’t vote for racists or strongly suspected Pedophiles.

I’ve finally met some black people that recognize the Democrats have done nothing but give them lip service for 57 years, and know that Trump brought them a strong economy. Not all of them are on the plantation

Hate to tell you, but Trump will get no more than 14% of the black vote. Hell, George W. Bush got 12% in 04. The blacks are not going to change because I don’t believe they are capable any more than the Jews. Choosing slavery in one form or another is endemic to both people. And one can hardly fault corrupt mentalities (the democrat party) for exploiting it. Frog & scorpion. No more difficult than that.

Don’t worry – I found the guy who is going to beat Joe Biden!

I’m still honestly having a hard time believing that Joe Biden is actually their person to run as their candidate.It’s really hard to believe. Really.

Who else do they have with national name recognition that has anywhere near his chances of winning, which are dismal at best, provided democrat vote fraud is attenuated?

I’ll go one better: Name one single reasonable democrat like a Evan Bayh or a Zell Miller.

Think about this: The last ‘reasonable’ democrat was probably Martin O’Malley.

As a former resident of the Free State, I must take issue with the statement that O’Malley is “reasonable.”

O’Malley took lessons in “horse’s assdom” from Biden. He was insufferable as our governor.

But I guess that on the Democrat scale he could be termed “reasonable.” God help us!

Even worse they chose Hillary as their 2016 presidential candidate despite the fact that she belongs in prison.

I think that only corrupt liars can stomach their ideology because it’s fundamentally dishonest.

At least Joe didn’t bust out into a tight freestyle rap, exhorting his “homies” to pour a “40” for Trayvon and Michael Brown, and, to turn in their “gats” and “nines” for cash, to aid in the pursuit of “ho’s” and the consumption of copious amounts of Hennessy and weed.

I would like to see a requirement that anyone who uses the word “racism” must define it.

notamemberofanyorganizedpolicital in reply to Anchovy. | May 23, 2020 at 6:48 pm

Easy. Just put up a picture of any Democrat politician.

Too bad the black dude didn’t retort with: “You ain’t white”.

Imagine the supernova of outrage if Trump had said this, and then explained it was “in jest”.

Well it is true that he isn’t a wise guy. He is foolish.
#DumpsterFiresideChats