Classic, she appears to have thought Joe Biden would pop the question when she was asked to join him on the Lawrence O’Donnell show. 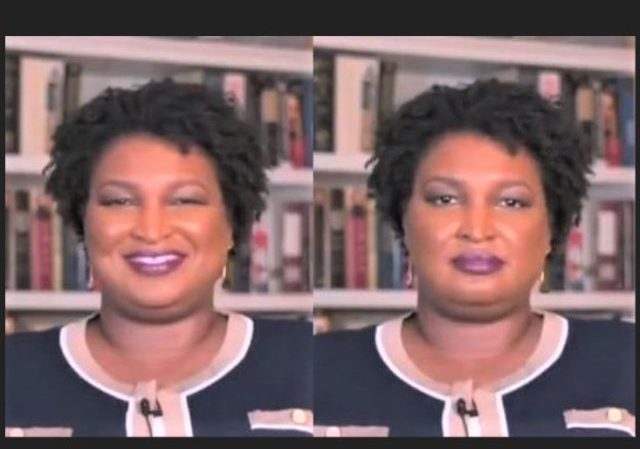 The “real” governor of Georgia, Stacey Abrams, has been embarrassing herself and the Democratic Party with her campaign to be named Joe Biden’s running mate (if he gets the nomination).

For some unknown reason, she appears to have been under the delusion that Biden would surprise her, and the world, with the announcement . . . on someone named Lawrence O’Donnell’s MSNBC show.

Watch her face as she realizes that’s not how it’s done:

The *Governor* of Georgia didn't take it well. https://t.co/P6fQiwGA3p

I almost feel sorry for her, but she still has a chance.  After all, Biden hasn’t yet won the nomination nor announced his VP selection.

In the meantime, she can look forward to that day in 2040 when she insists she’ll be president.

I got the feeling that the establishment wanted to shut her up by setting her up like that.

Well Biden “invited” her to mouth off and try to position herself as VP pick by announcing his racial/gender preferencing for VP. His handlers know that the grievance machine mongers would kick into overdrive the second he did that trying to limit his options.

notamemberofanyorganizedpolicital in reply to pwaldoch. | May 16, 2020 at 5:35 pm

But why is this post headed with a picture of Susan Rice??????

Stacey is the saner of the two.

But still need some sort of name tags on them to tell them apart.

Or when they told her, sorry ma’am but the buffet is now closed.

“still need some sort of name tags on them to tell them apart.”

Or a truckers’ scale.

If they don’t give Stacy first right of refusal she will be a 3 hundred pound monkey on their back. They’ll likely buy her off with a cabinet position she’s highly UN-qualified for.

She can be the new VSC. Voter Suppression Czar!

Even Biden is not that far gone….

Despite having lost most capabilities, Biden still has a gag reflex.

Not according to Barrack Obama

Screwed by the white man again!

notamemberofanyorganizedpolicital in reply to Wisewerds. | May 16, 2020 at 5:37 pm

Don’t get me wrong it was freaking HILARIOUS.

But seriously. What the fuck was Biden even THINKING holding this appearance? What was the point? He announced nothing meaningful.

Why the hell would you ask for a joint appearance with somebody who has been openly campaigned to be VP in order to announce….. nothing?

It makes him look like either a complete moron, or a petty, vindictive asshole.

embrace the power of “and” grasshopper!

I think it said something that really needed to be said.

“Hey, Stacey! Shut up and stop wagging your chin at every camera you see about how you’re going to be Veep. Ain’t happening. If you stay quiet and play cheerleader to the DNC, we’ll consider setting you up for some cabinet position, like HUD, but screw up, and you’ll be lucky to see a tv camera over the next decade.”

Another possible explanation: Lawrence O’Donnell read too much into this. For all we know it was he who orchestrated the whole thing. Maybe he suggested to Biden that it would be great to have another talking head, like Stacy Abrams, thinking that “gee golly ooh ooh I bet he’s gonna pick her, and let it be on my show!”.

I don’t think Joe could have possibly had enough of a moment of lucidity that he planned any of this, whether it was for A or B. It all lands on the lap of Larry O’.

She finally knows what it’s like to be dissed by an old white guy for real, not in her empty head.

All are female and African-American. Though SEN Harris is of Caribbean and Punjabi heritage.

This demonstrates that the d party is using their VP nominee for the traditional purpose of contrasting with the top of the ticket and to shore up constituencies that may be wavering.

The d are concerned that PDJT may continue making inroads into the African-American voter base. The d are also concerned that suburban dwelling college educated women will choose PDJT over a tarnished d nominee in Joe Biden, who if not guilty of sexual assault, has been captured on photos acting very creepy with his penchant for leaning close and hair sniffing.

” SEN Harris is of Caribbean and Punjabi heritage.”

I believe she claims “African-American” by insertion.

Her face is the one I visualize that I am speaking to when disputing my bill with a “supervisor” at the Electric Company.

We’ve all encountered her type. Angry, entitled and with a giant chip on her shoulder. When she finds herself in a position of power, she revels in lording over others.

That the Dims are willing to even fantasize about putting this person one heartbeat away from the most powerful position on earth tells you how absolutely insane they are.

Uncle Joe had better watch his white buttocks — nobody disrespects Idi Amin’s daughter like this, and, gets away, unscathed.

notamemberofanyorganizedpolicital in reply to guyjones. | May 16, 2020 at 5:39 pm

I can visualize Stacy getting up every morning muttering

“Time to fry the dirty rice…”

guyjones in reply to notamemberofanyorganizedpolicital. | May 16, 2020 at 9:54 pm

Could you explain the reference? Thanks.

Doubt she’ll still be alive in 2040. Her frame does not say “longevity”. It does say “adult onset diabetes”, though.

That was really a cold thing to do by Biden and his campaign staff. Not even a heads up prior to the show.

Seems it’s more on her and her delusional thinking than Biden and his dementia. She jumped to the conclusion that she was going to be asked to be VP, even though she has zero qualifications for the job. Given Biden’s dementia, she could end up President (gag) should Biden cheat his way in, as I doubt he could finish his term.

Not to mention that Moochelle Obama has an inside track to be his VP. Joe won’t be able to finish (or maybe even start) his term and it’ll be “Ba-rack-y’s back in town” before we know it.

So Rice must be a decoy to get the GOP to waste their powder and reveal strategies……..

We already had one racist fat slob as a First “Lady”.

We saw how that worked out.

Larry O’Donnell had to be in on the set-up.

The same face as seeing the sign on the broken ice cream machine at Golden Coral.

With what the DNC spokeswoman recently said about them NOT officially nominating Joe, I can’t imagine there would be a VP named before the convention. What kind of mess would it create for them IF he named someone, then didn’t get nominated?

Good for me that Schadenfreuda is 0 calorie.

When you realize all you’re qualified to be elected to is a part-time start legislator.

Will she have to resign as governor to be joe’s sex partner… I mean vp selection?
A slightly real version of stacey going from smile to grim.

So, essentially, she has no qualifications other than being Fat, Female, Black and having a Law Degree that I would bet my life was handed to her by Affirmative Action.

Joe backstage afterwards
” I was supposed to do what ? With her

The woman who declared Georgia would forever be ruled by a “majority minority”. That is redistricting under her would be such that the majority of the legislature would be blacks, who comprise but 30% of the population and decreasing, as compared to her hated whites, 60%, and hence rule the state and dispense racial favors and punishment as she saw fit.

Look, I know it’s not nice but, hell, I live down here so I’m just gonna say it; I swear that woman looks like an Atlanta drag queen.

Left at the altar, she consoled herself at the buffet.

Stacey, time to sing (as the fat lady), and give it up. You’re going to need to get a REAL JOB. The horror…

The only thing bigger that Stacey Abrams herself, is her ego. Even that massive frame can’t contain her self importance.

I doubt Biden actually has a say in who his running mate will be. That will be left up to the DNC establishment.

Joe probably forgot why she was there.

Why can’t Stacey run for President as an Independant?

When she loses, her base can ascribe it to anti-black voter suppression.