Stacey Abrams: I’ll be President by 2040

Stacey Abrams: I’ll be President by 2040 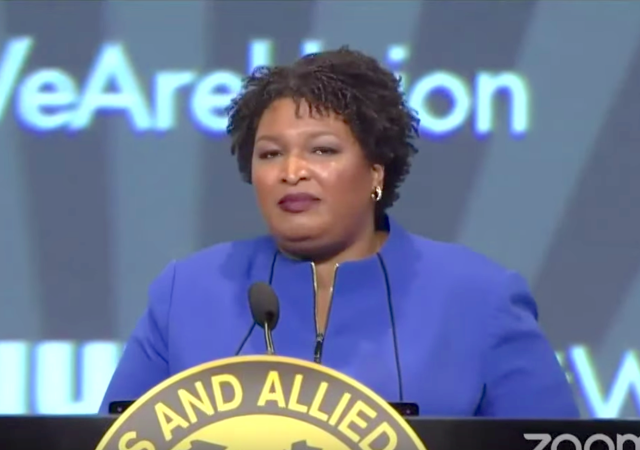 Ah, we really do have another Hillary Clinton.

Failed Georgia gubernatorial candidate Stacey Abrams told FiveThirtyEight that America would elect her as president by 2040.

Abrams spent the first part of the interview vomiting the usual talking points that her race and gender cost her the Georgia race.

The presidential question came at the end. The woman who has never held a public seat higher than the Georgia House of Representatives said, with absolute confidence, she will get elected to the White House by 2040:

“Do you think the country will elect a woman president in the next 20 years?” asked reporter Clare Malone.

“Do you think it will elect a black woman?” Malone asked.

“Do you think they’ll elect you?”

“Yes, I do. That’s my plan. And I’m very pragmatic,” Abrams replied as Malone chuckled.

I have no words. None.

Reminds me of the late Papa Coc Duvalier. Just call her Mama Doc

notamemberofanyorganizedpolicital in reply to sequester. | January 31, 2020 at 7:50 pm

Adult on-set diabetes will be her running mate until the end – 2039.

Think about how hideous she will be in another 20 years, and how she will have to go through doorways sideways.

She clearly doesn’t have a firm grip on reality. But the good news for her is that a large part of the electorate doesn’t, either.

She’s probably close to the truth. Remember the poll of the college aged kids who think socialism is better than capitalism?
Yeah, they’ll be the majority voters by then. And they’ll learn that while you can vote socialism in you have to shoot your way out. The whining will be epic.

Makes sense. It would take someone with 20/40 vision or worse to vote for her.

I know. Just looking at her, she makes me regret having 20/20 vision.

Only the 32 bit version. Of course since she operates on 8 bit ….

I designed multiprocessor 6500 based systems where master and slave processors, sometimes cascaded, ran with the slaves clock was switched so that a slave or master could write to or read a mapped common memory on the next clock cycle. In other words, the master processor was on one phase, while the slave was on the other. Those systems were far smarter than Abrams.

Those systems ran circles around Intel products which could not do this.

I’m an EE by training. I was told I couldn’t mention “master slave flip flops” to a client in NC because it was considered racist. I wonder what they teach in engineering school these days ….

What’s the over/under on the number of angioplasties and other surgeries to clear arteries she’ll undergo in the next twenty years?

I’m telling Stacey this as a friend. Stop shoving lard frosted cupcakes into your greedy, Jabba the Hutt cupcake maw or you won’t be campaigning for anything by 2040.

I would prefer she shoveling it in, her genes need to be safely placed where they can rot.

She’ll be president by 2040 in exactly the same way she’s governor of Georgia right now.

If I had to estimate the probability of two events that will occur in 2040:

1. Stacy Adams is President of the U.S.
2. Ruth Ginsburg is on the Supreme Court.

I would wager the odds of No. 2 to be greater.

Could happen. The board of directors of Weight Watchers frequently changes its presidents.

So sees her ascendancy to POTUS as a certainty based solely on her being black and a woman. Got it. Real qualifications are not necessary.

Well, the sainted Obama already proved this axiom where Dhimmi-crats are concerned, the novelty of his parentage and skin pigmentation being presented by a sycophantic and reverential media as ample substitutes for his meager/non-existent private sector and professional accomplishment.

GuyJones, I appreciate the gist of what you write, but really, you’re too kind, omitting the complete blackout of his records so that he refused to show he was even qualified as a natural born citizen.

He keeps claiming Kenya . . . . And still ALL his records are sealed.

That’s mean! She can’t help how she looks.

Even worse is that she cannot help being so dumb.

Yeah, but she’s got that look. A lean and hungry look.

You are right, to a point. I would not disparage a person for their physical attributes, but a weight issue is questionable. Most of the time it can (and should) be addressed. Other attributes like a stupid hair style are fair game. I would not ever seriously consider consider a candidate with glaring health issues.

The truth is, if she had an actual platform, it would need serious reinforcement.

And have at least one foot amputated.

Remind me what they call the presidential limo … the beast

The delusion is great in this one.

Doesn’t she know that Global Warming is on a twelve-year fuse?

Note to Stacy Abrams, we already had our first black female President in Barack Obama.

I’m thinking the odds are 50-50 that there will still even be a United States of America for her to be president of by 2040.

What is her pragmatic plan for living that long?

Have the feeling by 2040, she won’t even qualify as a footnote.

She can’t even get elected dogcatcher.

Imagine her trying catch a dog?

Let’s turn mochelle obama off her leash and see if Adams can get a net around her.

By 2040 she’s going to be a really big girl. Probably too big to run. Has anybody ever sucessfully waddled for president?

Taft weighed about 350 lbs. and was said to have gotten stuck in the bath tub.

In her manifestly self-reverential, entitled and totalitarian attitude, the vile Stacey Abrams resembles nothing so much as the end result of intercourse between Idi Amin and Hillary Clinton.

You so mean. Funny tho.

Clark, that’s the gift that keeps on giving the whole year.

The fat, gap-toothed, race-baiting ghettopotamus will just not go away.

She’s more likely to be exported to China as pork bellies.

This is like Al Gore…we’ll all be gone in 10 years.

Make a bold prediction far enough away that you don’t have to face the music down the road due to your own fade into obscurity.

Do you think you will be an Olympic contender in the giant salmon event?

Going by the Affirmative Action/quota system, the US won’t be due for another black president until sometime between 2050 and 2082.

They will not be able to elect another black president until all memories of Obama are gone. Maybe in 3-4 generations.

She’ll be dead from a massive coronary WAAAAAY before 2040…

More likely that she will be diabetic and on dialysis by then. Until then, maybe she will find some useful purpose in life. If not, she can always declare herself a Reverend or Minister of something meaningful in her faith tradition.

The rest of us will care when you kick the bucket and suddenly start voting Democrat from beyond the grave.

She will be President, of her neighborhood book sharing club. Maybe.

Best Comments threads on the web!
???

Stacy, try something new. GO GET A JOB.

Okay, I don’t like to hit people for their looks. Glass houses and all that…. But some of these comments were too funny not to upvote!

I will say, personally, I don’t think she looks that bad. The weight is way too much, but her face looks fine. Her nose is interesting.

I wouldn;t be surprized if her blood stream was pure Crisco. Is the presidential salary sufficient to feed her?

Sure, in some parallel universe.

Stacy adams is on the cover of the new edition of “Cannibal Bon Appetit”.

She actually looks pretty tasty laying on a silver tray with an apple in her mouth.

She might be President of the Jenny Craig fan club by 2040 if she gets started on one the plans today.

I would not vote for her to be president of the local homeowners’ association. She has never run anything but her mouth, and she does not have the experience or skill to run her finger up her butt. Yale cut corners and admitted her to law school and graduated her, and she still failed in the legal profession with that diploma.

Do you know how hard it is to end up broke and failed with a Yale law school diploma? And as a black female diversity hiring qualification? All you have to do is show up for about 3 years, do the work, collect the paychecks, pay off the debt, and then do whatever you want, like moving to a smaller firm, corporate job, selling insurance, financial planning, etc.

I think rampant diabetes and Heart Disease are far more likely than president.

To quote Wilford Brimley “Test your blood sugar”
Honestly with what I’ve seen of her professional acumen, she will have trouble being PTA president.

She won’t be president by 2040 or by 3040, but it’s highly likely that she will be whining that some primary was rigged against her to prevent her from winning it even if she got almost no votes.