Update: GA Dem State Rep Will NOT Resign After Party Attacked Him for Endorsing Trump

Update: GA Dem State Rep Will NOT Resign After Party Attacked Him for Endorsing Trump

The Democratic parties in Dekalb and Rockdale counties censured Jones because he had the nerve to think for himself. 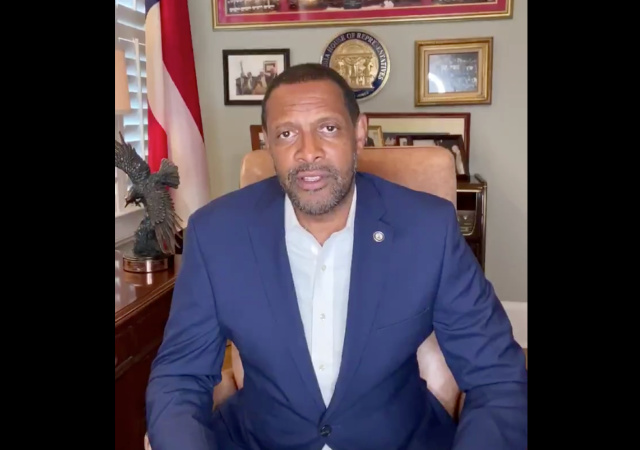 On Wednesday, I blogged that Democratic Georgia State Rep. Vernon Davis chose to resign after his party slammed him for endorsing President Donald Trump in November.

Davis said he changed his mind because so many people in his district and across the country supported his decision to endorse Trump.

He called it emotional and motivational.

After discussing it more with his family and supporters he chose to finish his term and remain on the ballot for another term.

He also said that he will work to help reelect Trump because he is the man for the job.

Yesterday, I announced my intentions to resign from my office. But shortly thereafter, the outpour of support I received was too great for me to ignore.

I will not allow the Democrats to bully me into submission. I will not let them win.

I will NOT resign. #MAGA pic.twitter.com/gR2MsU5Rb3

He should just change parties. He’d be more than welcome, and would have better career opportunities anyway.

Most important: he could leave the plantation and not have to sell his soul.

Bravo. This is excellent news.

Contrary to what The Fine Report commented, I think Jones should stay a Democrat and campaign as Democrats for Trump. IMHO, he would have far greater pull than switching parties.

Switch parties, sticking around after dis-obeying the Democrat Party “Massa’s” he could develop a case of “Arkancide”. Get out, while the gettin’ is good.

I see no reason for him to switch parties if he feels he really aligns more with the Democrats. I would not be surprised to see him being pushed out of his party, as the National Socialists do not tolerate anyone having a different opinion than they have.

I was disappointed to hear he was resigning, so I am fine with him remaining for the rest of his term in office. I doubt he will get another chance, as he will be ousted as soon as his next election bid comes up. The DNC will pull out all the stops to replace him, including harvesting votes against him in a primary.

What a rarity to see someone from that party stand up against the party line. Unfortunately, he will feel their wraith, and is basically a lame duck now.

Not a lame duck. He still gets a vote in the Assembly.

Can still sponsor bills. Maybe have a hard time getting them passed, but Speaker Ralston will probably welcome a democrat’s bills, if he supports Trump.

Elbert Guillory: “Why I Am a Republican.”

Good for him. And Georgia.

Nothing is more frightening to the Left than true empowerment and independence. This is speaking truth to power.

Good deal, glad to see him stand up to the fascists.

This could have more than a little bit of importance. IF 5-10% of the Black vote is dissatisfied enough with the Democrats who normally own ALL their votes, it will have major impact on national electoral politics. It is something to watch. What would be interesting would be if the Democratic Party began threatening that voter group and gets a resistance.

That group already does get threatened, it’s just done subtly with fear mongering.

“Vote for us Dems or else this will happen to you…”

He is a profile in courage.

Good for him, and apparently his district agrees.

This has some superficial parallels to Zell Miller in 2004, hmmm… Maybe somebody should invite him to speak at this year’s GOP convention.

Since he’s already pissed off the DNC, why not?

A song everyone facing the wrath of the leftist should listen to is Aaron Tipons “you’ve gotta stand for something”.

You’ve Got To Stand For Something

Better yet… I Won’t Back Down