“Turn the lights off, I have left the plantation. Someone else can occupy that suite. Therefore, I intend not to complete my term effective April 22, 2020.” 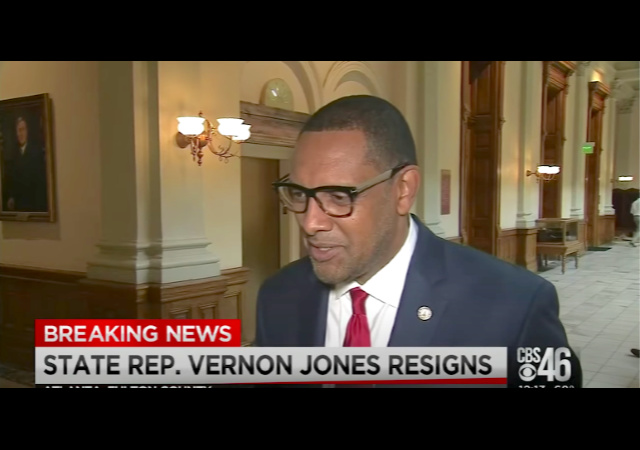 But he resigned on Tuesday after the intense backlash he received because God forbid he has an opinion that differs from those around him.

I’m a Georgia State Representative and lifelong Democrat. But in this election, I’ll be casting my vote for @realdonaldtrump.

I’ve seen more Democrats attack me for my decision to endorse @realDonaldTrump than ask me why.

They’ve used and abused folks in my community for far too long, taking our votes for granted.

Black Americans are waking up. An uprising is near.

.@realDonaldTrump has done more for black Americans than any other President in modern history.

Would a “racist” do that?

Democratic Party of Georgia Chairwoman Nikema Williams claimed Jones “does not stand for our values.”

I’m an American first. All this statement shows is that there is no room for a free-thinking black man in the modern day Democratic Party.

The party even floated the idea of punishing Jones for endorsing Trump. They thought about “issuing a reprimand or endorsing his” primary opponent:

“We are going to take every step we can under our bylaws,” said John Jackson, the county party’s chair.

“We do not stand for President Trump. It’s Jones’ right to vote for who he wants, but when you get elected as a Democrat, you’re a part of the party leadership.”

Democratic parties in Dekalb and Rockdale censured Jones, but did not endorse his opponent.

I’m not surprised that the Democratic Party has chosen to rent out my suite on the plantation to my opponent.

I will never apologize for my convictions. https://t.co/unSbPaqTZr

Jones thought he could handle the fire he knew would receive from his party, but that quickly changed. From AJC:

“Turn the lights off, I have left the plantation,” Jones said in a statement. “Someone else can occupy that suite. Therefore, I intend not to complete my term effective April 22, 2020.”

His spokesman said the Lithonia Democrat would not be seeking re-election.

“I don’t plan to leave the Democratic Party because somebody’s got to be in there to hold them accountable —hold them accountable to how they are treating black people (and) root out the bigotry,” Jones said on The Rashad Richey Morning Show shortly after announcing his resignation.

After a fiery and, at times, combative discussion, Jones ended the interview early, prompting Richey to say: “Hang up on this clown, please.”

He tweeted out his decision and promised to work on re-electing Trump in November.

Earlier today, I made the decision to not seek re-election to the Georgia House of Representatives.

I look forward, however, to continuing to serve my community in other ways and doing all I can to re-elect @realDonaldTrump.

We will Make America Great Again ??

I look forward to committing my full energy to the re-election of @realDonaldTrump and ensuring that the radical Democrats that have overtaken my party suffer a resounding defeat. https://t.co/WdbNPnBsO6

That’s a mistake.
He shouldn’t have resigned.

I suspect he realized that his party was going to go all out in guaranteeing that he lost his primary race, and would not be allowed to run for his office again – so he’s just getting ahead of the curve.

Looking at his statements, this looks like a man with a plan to do something more.

He’ll probably get a pay raise by working for Trump

He’s swapped his title around as indie and dem I think a few times and has been in office forever.

The dem’s freaking hate him. His district has a lot of Tribal interests that would never vote GOP. However he’s fiscally conservative and serving in a rural area he’s very much in favor of property rights and low taxes.

The thing is, he has no power since they screw him on all party stuff and all the power as a tie breaker.

So if this guy is in touch with his district, he doesn’t need to resign, but if he’s just an Obama that was keeping a chair warm, the party will replace him in a heartbeat.

The dems tried primarying Tim Sheldon a lot of times. It didn’t go well as all the GOP voters crossed over and voted for him… Wa is a top 2 primary state.

Did I mention the dems really really hate him?

Democrats keep turning their fellows into independents or members of other parties. It would be funny if he took the seat running in upcoming elections away from Dems.

Weird that he resigned.

Even weirder is the coordinated fascist attack on him. Orders from up top. From soros or Xi?

notamemberofanyorganizedpolicital in reply to TheFineReport.com. | April 22, 2020 at 9:34 pm

Can’t have those runaway slaves from the Democrat Party Plantation.

Diamond and Silk today with Senator Marsha Washburn is a must see interview.

This covid19 pandemic should be a wakeup call to all freedom loving Americans. The democrat party is power hungry, corrupt and a danger to individual liberty.

That is a man of courage.

How hollow in comparison all the gays, bi’’s, trans etc look when they are lauded by the media for their courage in coming out. If you want to see real intolerance in the social sphere, support Donald J. Trump among liberals.

With regard to the gentleman in question, there’s no question about it, there’s no fury like a Democrat scorned. I have been thinking about joining the dem party because it needs American non-Marxist influence. The GOP and the Dems are never going to Allow a third-party to have ballot access everywhere. That’s just the way it is.

No question that the militant factions are bad for America, but most are still in the closet with respect to their childhood abuse, and I understand you were referring to those militant factions. I am simply impelled to speak in the defense of People who were victims of criminals when they were children. They are near and dear to my heart. Most people are unfamiliar with the alternate universe of these struggling adults.

“The GOP and the Dems are never going to Allow a third-party to have ballot access everywhere. That’s just the way it is.”

And then Trump came along, and he has both Liberal and far right dancing to his tune, one tweet at a time. A complete game changer. Are there more out there?

There may be more out there, but Trump and his voters have been stymied by the powers that be.

The wall isn’t built, we still have “birthright” citizenship, the courts are usurping his power all the time….

He’s great, but he’s not enough. We need more, much, much more.

America, love her or leave her.

Now THAT is a “blexit” move, like a champ.

Come on across the aisle my brother.

Can’t leave the plantation without getting a whipping. He should change his last name to Jordan, get some reflected credit off the name.
Good luck buddy, but the dems WILL reclaim their slaves by hook and by crook.

OK, I was wrong. I said there wasn’t a democrat left that wasn’t an anti-American commie.

There is at least one.

But just for a short time, until he realizes his idea of staying in the D Party “to hold them accountable” is a fantasy, and then joins the Republican Party.

With a little more foresight, he would have stayed in office and just changed Party affiliation. No shortage of people that have done that, and often for less reason.

If you look at the shallow bench of the Democrats, that their leader is Nancy Pelosi who’s what about 80, and Joe Biden is their choice as a presidential nominee, you can see that they have been hollowed out and it’s ripe the party is ripe for new blood.

And it’s my position that the new blood to be MAGA types. Considering how hollowed out they are, it shouldn’t be that hard.

I hear you, Barry, but we don’t know his real reason for quitting. Was it the harassment? Was it to get more accomplished?

Bernie Sanders isn’t a democrat and yet, there he is.

I ran for office as a Libertarian in the early 90s. The ballot access is the issue.

There is no other way to hold office holders to account, if they don’t have concern they will lose an election. That, and with newspaper coverage.

This is what courage is all about — staking out a position, even though you know it will cost you your job, friendships, etc., and, lead to vilification, abuse, threats, and, possibly violence, against one’s self and one’s family.

Much respect to Mr. Jones.

So happy Mr Jones listened to using his reason as he witnessed the prosperity that occurred within his district as a result of Trump’s policies rather than Democrat propaganda. He’s a courageous man of integrity to willingly walk away from and lose his position and future career for his embrace and commitment of President Trump. As a Georgia resident, I look forward to watching Vernon Jones’s future political career as a Republican.

I agree. Mr. Jones needs to switch parties and work to change the situation on the plantation.

The problem with not having a viable 2nd party is that your real choice for a candidate occurs during a primary. But hardly anyone votes in them, thus the establishment candidate usually wins handily.

Over the decades, I’ve learned it’s just about impossible to get most people to pay attention to primaries. They vote in November and think they’ve done their duty.

Since people don’t vote in primaries, we need a true choice in the general elections. That’s why the viability of the Democrat party is so important. And I mean a TRUE CHOICE between pro-American positions.

For example, when both of the candidates agree “birthright” citizenship should be preserved, you don’t have a choice. Even if one pretends to believe it should be eliminated but refuses to do a damn thing to accomplish that. But Americans oppose it and for good reason.

The political party monopoly should be ended forthwith. But it won’t be. Reality all the way around.

The Left have always been a tolerant, understanding group of clear, open thinking Patriots. NOT!!!

https://twitter.com/RepVernonJones/status/1253398909117960193
he’s not resigning. honestly I dunno about this guy.
he raises a good point about DNC however really have issues supporting him.