The internet is forever. 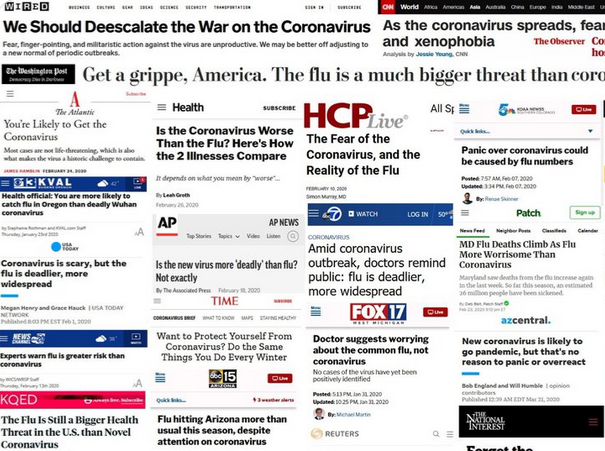 As the rest of the world battles a deadly pandemic, the media elites suffer from an acute case of Trump Derangement Syndrome.  It’s so acute, that they are seemingly completely focused on tearing down the president at this time of national (and global) crisis.  It’s a losing strategy, but it’s the only thing they can manage.

The latest was this gem from the Boston Globe editorial board that histrionically claimed Trump has “blood on his hands” for his handling of the Wuhuan coronavirus outbreak.

Here is one paragraph (yes, it’s only one; I broke up the wall of text for ease of reading):

What we have instead is a president epically outmatched by a global pandemic. A president who in late January, when the first confirmed coronavirus case was announced in the United States, downplayed the risk and insisted all was under control. A president who, rather than aggressively test all those exposed to the virus, said he’d prefer not to bring ashore passengers on a contaminated cruise ship so as to keep national case numbers (artificially) low.

A president who, consistent with his mistrust and undermining of scientific fact, has misled the public about unproven cures for COVID-19, and who baited-and-switched last week about whether the country ought to end social distancing to open up by Easter, and then, on Saturday, about whether he’d impose a quarantine on New York, New Jersey, and Connecticut.

A president who has pledged to oversee the doling out of the $500 billion in corporate bailout money in the latest stimulus package, some of which will go to the travel industry in which his family is invested. A president who spent a good chunk of a recent press conference complaining about how hard it is for a rich man to serve in the White House even as Americans had already begun to lose their jobs, their health care, and their lives.

A president who has reinforced racial stigma by calling the contagion a “Chinese virus” and failed to collaborate adequately with other countries to contain their outbreaks and study the disease. A president who evades responsibility and refuses to acknowledge, let alone own, the bitter truth of National Institutes of Health scientist Dr. Anthony Fauci’s testimony: that the country’s testing rollout was “a failing.”

Wading through the turgid, self-satisfied bloat of this prose, the Globe editorial board takes the time to lambaste Trump for downplaying the threat early on.

It’s interesting how they seem to have memory-holed their own—and their media peers’—initial downplaying of the then-unknown potential crisis.

Media wasn’t exactly on the ball either… pic.twitter.com/P4qkyK1GoK

And they weren’t doing it only “in print,” the cable MSM was downplaying it, as well.

To hear them now, they all saw it coming and had been issuing warnings for months, warnings Trump supposedly ignored.

Twitchy has some good responses to that loser, #FakeNews narrative.

Remember all those questions for the Democratic Candidates during the debates about the Corona virus?

Remember that ban on many flights/passengers from China that Trump issued in late January? The one the Democrats and media condemned as xenophobic and racist? Well, now Trump is incompetent for not having done it sooner and made the restrictions broader, according to the New York Times.

Is it any wonder the media is cratering in public opinion?  Honestly, I don’t think they will be able to hang on to these glory days of “cratering” for much longer given what now passes for “journalism.”  Speaking of which, have you heard the one about the journalist . . . .

Trump Derangement Syndrome is worse than the china virus.

Oh, and where have you been? I thought anti-Trump space aliens had kidnapped you…

Perhaps what looks like TDS is just a tactical assignment made by the “Central Committee” as part of the bigger strategy. Was Pravda clueless or was Pravda a tool? It is dangerous to underestimate the enemy when in a war.

Jeebus these clowns are tiresome. Bite me you wankers!

To be fair all they learned at reporters school is how to be sure the make up is on correctly and where to buy decent clothes when the camera lights up.

How quickly y’all forget, you were pulling this crap in March, accusing the CDC and Democrats and the media of overhyping things. Y’all can’t have it both ways: https://legalinsurrection.com/2020/03/branco-cartoon-nothing-but-fear-itself/

I went back through the comments in both posts you referenced. I didn’t see a comment from ‘Awing1’ on either. If you had an opinion to express related to those posts then the day of or next day would have been relevant. As you are no doubt aware each day more is learned about Covid-19 and some projections based upon the behaviors of similar viruses have been borne out while others have not.

The fact remains that the CDC has been and continues to be overly pessimistic in their projections. In their defense, they were forced to extrapolate data from other nations into their models. They now have a good bit of data from the U.S. to utilize in adjusting their models. I personally trust data from the U.S. over data from China or Italy. I would hope that they would utilize data sets from the various regions of the U.S. to more accurately reflect the on the ground situation. Every location isn’t NYC, though a few are getting close.

What? The point of the post is that the media is bashing Trump for something everyone, including them, was doing. They are now pretending they knew all along and Trump was the only one who didn’t, but they didn’t, either, as evidenced above.

Fairly easy to find video where Marcus Welby Fauci is being interviewed and tells interviewer us citizen has nothing to worry about as long as he she do the cdc thing – wash hands avoid crowds don’t sneeze cough on any one. And so on. Interview in late Jan 2020.

Have never heard any msm ask the good doctor about this.

This is something that will tick you off. Or worse. And what I want to say would probably be redacted or worse. Who. The. Hell. Does. He. Think. He. Is.

Tom Elliott
@tomselliott
De Blasio: I told the Pentagon “a week ago” to give me “1,000 nurses, 150 doctors, 300 respiratory therapists” and “I’m still waiting”
———————-
Charlie Prince
@cprince_60601
·
Apr 3
Replying to
@tomselliott
And on March 10th he was encouraging New Yorkers to go out and continue with their normal business.

From where is the Pentagon supposed to procure 1,000 nurses and 150 doctors?

They are our enemies.
The title of ‘Enemies of the People’ is very well deserved.

Talk about rewriting history, not a single one of these articles (the bulk of which just talk about the likelihood of someone having COVID-19 *on that particular day*) is more recent than the president’s ridiculous claim that “the 15 within a couple of days is going to be down to close to zero, that’s a pretty good job we’ve done.”

Hey commie, party taking a beating, sent you out to spread the lies?

I’m sorry, what did I say that is a lie? Please feel free to provide evidence contradicting my claims.

I come to this website for the same reason I’ve been coming here since 2010, Professor Jacobson, the founder of this blog, is the Director of the Securities Law Clinic at the law school I attended, and in that capacity was my professor for several semesters.

What’s your reason for visiting the blog? You’re too fragile to confront information that harms your worldview?

Please tell us for the fiftieth time that Prof Jacobson was your professor.

Do you think anyone here cares? You are a commie, a paid commenter.

Your lawyer skills are so poor you can’t make a living practicing law.

The MSM has the unusual ability to be wrong everyday, even if it means being on the opposite side of what was said the day before. The trend is clearly to say Trump/GOP/Conservatives/Judeo-Christians are wrong. When proven right the day after, they ask why they weren’t right 2 days before. As if they were.

One has to admire the media’s sheer bloody determination to be wrong on so many items day after day. That level of commitment is a thing of beauty ??

It’s been interesting watching the left-wing roaches play CYA after they all mugged for the Camera to say Trump travel ban was xenophobic and racist. Say he was slow to the start when they were all saying come on down and party with us.

Old USSR joke. “Our future is wonderful and certain. It is the past that keeps changing.”

The comparison of CNN, MSNBC, et.al. to Pravda is obvious.