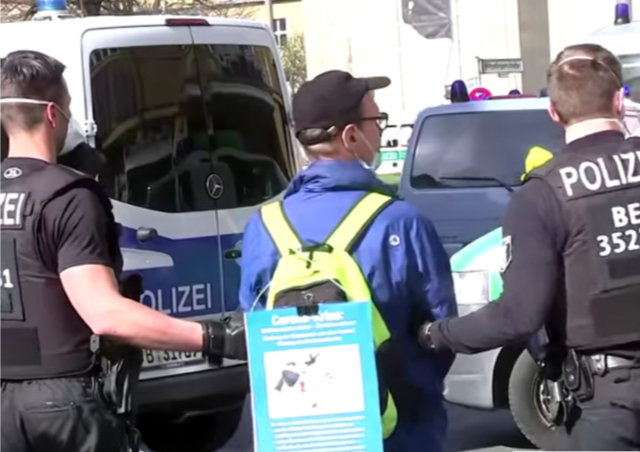 Protests were held in Berlin and other German cities against the lockdown measures imposed in the wake of coronavirus pandemic. On Saturday, around 1000 protesters came out in German capital Berlin and hundreds in the southern German cities of Stuttgart and Würzburg against restrictions in place since March 22, German newspapers reported.

Demonstrators demanded the restoration of their constitutional rights curtailed by the government measures, denouncing the steps taken by German Chancellor Angela Merkel as dictatorial. Berlin-based newspaper Der Tagesspiegel and other mainstream media outlets described some of the protest organizers as “right-wing populists” and “conspiracy theorists.” Police in Berlin arrested more than 100 people for taking part in the unauthorized demonstration, media reports said.

Chancellor Merkel announced partial easing of the nation-wide lockdown following the Easter weekend, allowing small shops to resume business. School and colleges are also in the process of reopening. Her critics want the government restrictions on retail, gastronomy, and service sectors lifted as well.

Similar protests were also reported in neighboring Austria, where police broke up a demonstration in Vienna, the newspaper Wiener Zeitung reported.

Hundreds of people took part in demonstrations in the cities of Berlin and Stuttgart on Saturday against government measures introduced to protect the country from coronavirus.

Around 1,000 protesters gathered in the German capital at the Volksbühne theater near the city center. Protesters shouted “I want my life back” and held up signs with slogans such as “Protect constitutional rights.”

The protesters handed out newspapers questioning the need for lockdown measures and claiming the coronavirus is an attempt to seize power by spreading fear. Police spokesman Thilo Cablitz said permission was granted to distribute the newspaper, but that health authorities had not approved the gathering itself.

“During coronavirus times and according to containment regulations, we are obliged to prevent a gathering,” Cablitz said.

Police, who cordoned off the square directly in front of the building in an effort to prevent crowding, used megaphones to call on attendees to disperse and said they arrested more than 100 people. (…)

In the southwestern city of Stuttgart, between 350 and 500 people answered a call to protest by the group “Querdenken”. Its leader, Michael Ballweg, said the demonstration was in support of basic rights such as freedom of assembly and freedom of religion. The gathering had initially been banned before it was allowed to go ahead by the Federal Constitutional Court.

Germany has been at the epicenter of the Coronavirus outbreak in Europe. The country registered close to 157,000 cases of the Wuhan virus, and suffered the loss of more than 5,800 lives, data compiled by Johns Hopkins University shows. As of April 24, the contagion claimed 116,279 lives across Europe.

The protests took place days after authorities called off this year’s Oktoberfest, Germany’s biggest folk fest expecting to host six million visitors. The decision is a big setback to the local economy. Hotels, gastronomy, and tourism sectors are projected to lose more than a billion euros in revenues due to the cancellation.

The demonstrations highlight the economic hardships faced by the German working class, self-employed, and small business during the month-long shutdown. With no end in sight, the number of bankruptcies are expected to rise in coming month, German newspaper Die Süddeutsche Zeitung predicted. Not just individual businesses, Germany, too, reels under the economic impact of the coronavirus pandemic. Europe’s largest economy is heading for a ‘deep recession,’ media reports suggest. German economy (GDP) is expected to shrink by 10 percent in the current quarter (April-June), German business daily Hendelsblatt reported.

On the global scale, the Wuhan coronavirus is set to have devastating impact. The contagion will cost $9 trillion worth of global economy — “greater than the economies of Japan and Germany, combined,” the International Monetary Fund (IMF) estimates.

The common people have woken up to the GIGANTIC disconnect between what was predicted and what has actually happened, and yet the governments have not done a single thing differently.

This is simply not going to continue for much longer, whether governments like it or not.

Well at least Germany is opening their schools, our children, who need all the help they can get won’t see inside a classroom till Fall, and later if the left has anything to do with it.

I am sure they will worry their indoctrination will be hindered however, Trans reading time with the Kinders… massively missed…

Germany has a constitution???? That grants rights to citizens and not just powers to a limited few in government????

Who’d a thunk it?

Feudal Lord Merkel and EU bureaucrats get paid no matter the season.