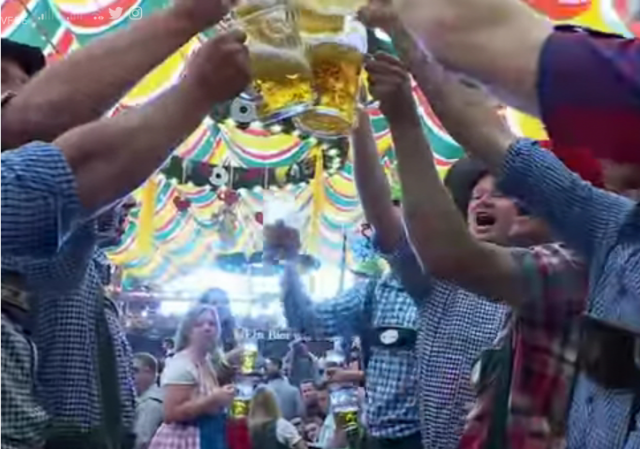 After the postponement of this year’s Tokyo Olympics, Germany has called off Oktoberfest set to take place between September 19 and October 4. With Germany struggling to contain Wuhan coronavirus, “the risk is simply too big,” Bavarian state Prime Minister Markus Söder said while announcing his decision.

“To live with coronavirus means to live carefully till there is a vaccine or a medicine,” he added.

The measure taken by the Bavarian state government is seen as part of Germany’s attempt to prevent the spread of the coronavirus. The country has registered more than 150,000 cases of the life-threatening virus and suffered more than 5,300 death, according to the tally by Johns Hopkins University. Neighboring France and Southern European countries have been struck by the contagion, claiming 113,102 lives in Europe.

The decision comes as a massive setback for the regional economy. The world’s biggest beer festival, first held in 1810, was hoping to welcome close to six million visitors this year. The folk fest in Munich generates close to a billion euros each year, German business daily Handelsblatt estimated. The local vendors had proposed the idea of holding a “mini-Oktoberfest,” open only to the residents of Munich and the adjoining areas. The proposal was turned down by the city officials, leading to the canceling of the festival first time in 70 years, German media reports said.

From music festivals to major sporting events, the ongoing COVID-19 pandemic has prompted a wave of unprecedented event cancellations around the world — and Germany’s Oktoberfest is no exception.

Germany’s latest lockdown measures now include a ban on major public events until August 31. Although Oktoberfest was due to start after the current cut-off, Bavaria’s state premier said on Tuesday the festival would not take place this year.

“Based on the current situation, I can not imagine that such a large event would even be possible at that time,” Markus Söder told journalists. He added that he and the mayor of Munich had jointly made the final decision to call it off.

Berlin had placed sweeping coronavirus-related restrictions on March 22, closing all businesses except supermarkets and pharmacies. The government shut down schools and colleges, and forbid public gatherings. Officials have rolled back or gradually eased most of these measures.

Following the Easter weekend, German Chancellor Angela Merkel allowed the reopening of some shops and resumption of classes in schools but kept the ban on significant events until August 31.

This is not the first event of global significance called off due to the outbreak of the virus, which first appeared in the central Chinese city of Wuhan. In late March, Japan postponed Tokyo Olympics until 2021. The Games should have started on July 24, 2021. The delay is estimated to cost Japan $6 billion in economic loss, Japanese business daily Nikkei reported.

The Wuhan coronavirus has put social and economic life on hold, making it the biggest disruptor since the end of World War II. With billions of people under a lockdown or other restrictions, the International Monetary Fund (IMF) estimates the contagion will wipe off $9 trillion worth of global economy.

In the face of mounting losses, China refuses to allow any independent probe into the outbreak. Beijing has rejected the demands for investigating the Communist’s regime handling of the pandemic or the role of the Wuhan Institute of Virology in connection to the contagion. Beijing, back by the UN health agency WHO, concealed the destructive nature of the pandemic, denying even ‘human-to-human transmission’ of the virus as late as mid-January. The medical research facility in Wuhan was known to have been studying bat-borne viruses similar to the one that broke out in the city.

notamemberofanyorganizedpolicital in reply to buckeyeminuteman. | April 23, 2020 at 6:07 pm

But they have copies of the secret agenda!

They’re in it for the wurst.

The country has registered more than 150,000 cases of the life-threatening virus
This is one of the problems reporting on this pandemic. While this is a technically correct statement, the phrase “life-threatening” carries a connotation of “catch it, and it’ll kill ya!” Which is patently NOT true, given the next number quoted:
suffered more than 5,300 death[s]
While 3% is fairly high for a virus like this, it’s nowhere near earth-shattering. And 150,000 cases (likely meaning “symptoms” or “case tracing and tested”) in a country of over 83 million, is not that many (for something being touted as horribly infectious and so deadly). It’s less than 0.2%. Given that it needs to hit about 60 million “cases” to achieve herd immunity….

This is much like the use of the word “pandemic” to talk about the virus. While the technical definition is “infectious disease that occurs in multiple countries” it has been used in teaching history to mean something that wiped out job lots of people around the globe. So, again, the connotation means that people fear it much more than if a more neutral word were used. (BTW, this connotation also applies to the word “epidemic” as something that isn’t just widespread but horrifically dangerous.)

While the doctors speaking about this might very well be using the word(s) neutrally, some large portion of the media knows that connotation is there, but uses the word(s) anyway.

(Good on you for that paragraph. Helps keep context.)

I can go to Hofbrauhaus in Cleveland, Columbus or Cincinnati and drink all the liters of Oktoberfest or Hefeweizen I can handle as soon as restaurants re-open. Prost!

Uh, alcohol kills the china virus. I say drink away, and bathe in it.
🙂

Germany has been successful at minimizing the impact of the Coronavirus, in part because they have a much higher per capita prevalence of ICU beds and medical equipment and also because the Germans don’t need to be harassed into not being vector-happy congregating idjits.

Germany is also slowly re-opening up.

Yet even they, who are opening up again like so many in America want, recognize that Oktoberfest would be a disease-ridden vector-orgy of death.