“I’ve been through a lot, so to walk through my front doors and see that crap, it hit me in the heart this time.” 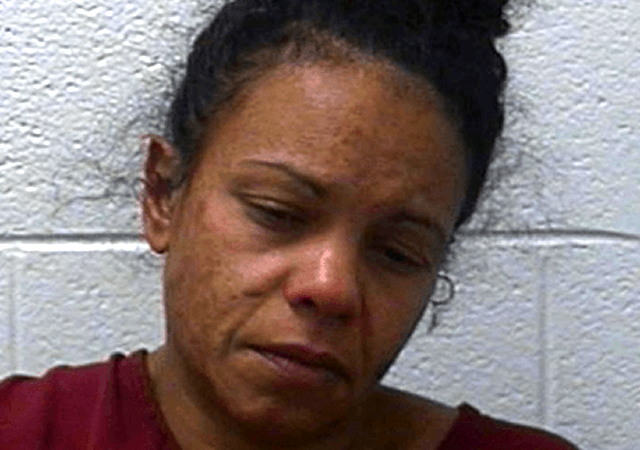 Law enforcement in Johnson City, Tennessee, responded this week to a possible hate crime. Someone carved the words ‘white pride’ into the sidewalk in front of a black-owned gym. Ultimately, a suspect was arrested.

Oddly enough, the person who was arrested is a woman of color.

A woman has been charged with vandalism under $1,000 after authorities say she used a rock to carve “white pride” into the sidewalk at a Johnson City business.

According to the release, 41-year-old Mahagany Teague vandalized the DC Fitness on Bobby Hicks Highway in Johnson City.

Authorities say she was arrested on Tuesday and has been booked into the Washington County Detention Center. She’s being held on a $1,000 bond.

“White pride” was carved on the ground outside a black-owned gym in Johnson City, Tenn. The local community rallied in support of the business. Following a police investigation, Mahagany Teague, 42, was arrested and charged with vandalism. https://t.co/akvmEpdmZA #HateHoax pic.twitter.com/uHZIfVg1N0

A 41-year-old woman was arrested for defacing the property of a black-owned gym by carving “white pride” into a sidewalk outside the gym in Johnson City, Tennessee last week.

Local reports said the community was outraged and rallied around in support of the business, DC Fitness.

The business owner told local reporters that when he first saw the words “white pride” carved into the sidewalk, “It hit me in the heart more than anything.”

“I had to get an accounting degree for people to trust me, and I have a cardiopulmonary science degree so they trust me medically with their health,” Derrick Carson told the Johnson City Press. “I’ve been through a lot, so to walk through my front doors and see that crap, it hit me in the heart this time.

“To put this here — at my front door — everybody has to see that when they walk in,” Carson added. “It basically says, ‘The person that’s opened this business ain’t worthy.’ It hit me bad today.”

What compels someone to do this? Are people truly this invested in proving America is racist?

So, my corner of paradise makes the news. It’s not the kind I want to see. -sigh-

“White Pride?” My gosh, how will the community ever recover? I wonder how many children were scarred for life by this hateful message. I’m just wondering if “Black Pride” or “Gay Pride” are both hate speech now? Id crapping in the entrance to a white-owned store hate speech too?

Do you suppose the if you wrote “Gay White Pride” it cancels itself out?

I’m both. Pride? Nope. Just who I happen to be.

LOL so the grizzly has more layers than just the beard.

Glad to have you commenting over the past several months (are you at a year yet?)

I’ve been here quite a while.

PS: as for the beard: 42 years and counting. I could be someone else entirely under all the face-fur. But, I will assure the old timers: I’m not Rags.

Oh Mahagany. Do you know, where you’re going to? Do you like the things that life is showing you?

White Pride and the man couldn’t handle it
How obscene, how hurtful, how hateful!

Once you go black, you never go back

So tired of this crap

I’m White and I am
Proud

White culture has produced the most advanced societies in the world

Agreed on all of this.

I am thinking this is a double hoax. Both the black woman doing it, and in all likelihood was paid by the gym owner to do it. His over-reaction is a big fat red flag for me.

Harvey Weinstein has those cornered.

Are people truly this invested in proving America is racist?
Yes.

I will give her credit – “carving” words into a concrete sidewalk with a rock takes a certain level of dedication and effort. I wonder just how big this “message” was?

From the article: “‘White pride’ was carved on the ground outside a black-owned gym in Johnson City, Tenn. The local community rallied in support of the business.”

If she wanted to make it look like Johnson City was a racist community, I’d say she failed spectacularly. And her infamy and well deserved humiliation will cost her $1000. As a Southern man, I say good.
.

There are so, so few genuinely racist incidents in this country that the race-obsessed left must, like this woman, invent these hoaxes.

Muslims in particular use this ugly tactic. Because Muslims are of the left, the MSM believes every one of them, hyping them the upmost. Then, when the hoax is uncovered, never reporting on the duplicity.

When it comes to hate crimes, demand far outstrips supply. Economics tells us that when demand exceeds supply, new sources of supply will ramp up to fill the demand.

“What compels someone to do this?”

It’s supply and demand. SJW’s demand a ready supply of evidence that this nation is inherently racist and full of “white supremacists”.

Normal people stubbornly (and quite selfishly by the way) refuse to provide that evidence, so they have to create their own.

Whether it’s blacks, or LGBTQWERTY, or feminazi’s or just liberals in general, the MO is the same: they need “proof” that their opponents are evil so they produce it, then the media and other leftists feign outrage for a news cycle or two until the incident is proven to be a hoax, and then its memory-holed. The sad fact is that enough people will remember the initial hyperbolic headlines and not the fact that it was ultimately proven a hoax that the “America is evil” propaganda is perpetuated effectively.

It’s difficult to scream 24/7 about white racism when America is one of the least racist countries in the world’s history.

The first problem with hate hoaxes is that they’re hoaxes. The second is that, like false accusations of “sexual misconduct,” they make people assume that all such claims are lies.

Doesn’t it kind of say something about “white racists” that there aren’t enough of them around that blacks have to commit hate crimes against themselves or other blacks?

Seems to me the “racism” coming from blacks is quite deep and quite wide.

Oddly? It’s not odd at all when you consider that the vast majority of “hate crimes” that have been committed in this country over the past decade or more have been hoaxes committed by non-whites.

It would only be “odd” now if one of these “hate crimes” were actually committed by a white person.

The hate hoaxes are blood libels against whites. She needs to be charged with a hate crime.

American racism has a high value that benefits its “victims” far more than it costs. But it is also vanishingly rare, and so people are incentivized to counterfeit it.

“I had to get an accounting degree for people to trust me, and I have a cardiopulmonary science degree so they trust me medically with their health,”

So he has two valuable degrees and he…owns / manages a gym?

I suppose that if you can’t find any racism, it must be invented. We are seeing a lot of that lately.

The phrase should be carved into her forehead.

We are truly through the looking glass.

We have white people pretending to be black people so they can be outraged at the persecution.

We have black people hanging racist symbols with the intent to intimidate other black people.

It’s supply and demand, if there isn’t enough racism, just make some up.

At this point, when I hear of an episode like this, I expect it to be a hoax. Another commenter observed that because there are not enough so-called hate crimes being committed to support the narrative, they have to stage them to prove how hateful ordinary people are. All of the identity grievance groups do it and they are always exposed.