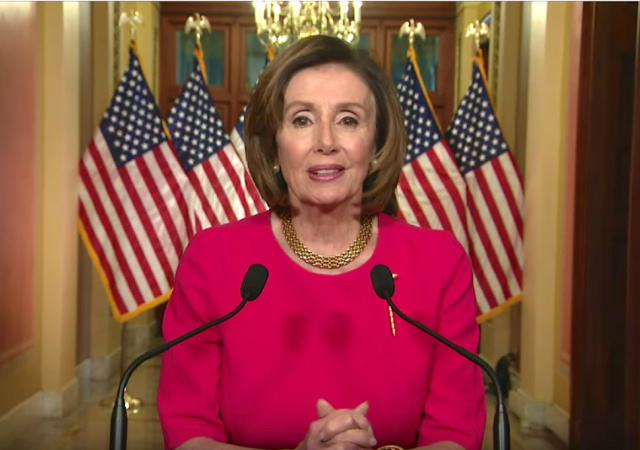 To no one’s surprise, Speaker of the House Nancy Pelosi has already tried to take credit for the bill.

Pelosi: Tonight, the Senate voted on legislation which, thanks to the leadership of Congressional Democrats, has been turned upside down from a Republican corporate focus to a Democratic workers-first focus.

Pelosi on Senate’s coronavirus bill: On Friday, the House will take up the legislation with strong bipartisan support.

Pelosi will hold a press conference at 10:45 am ET:

There are many problems with Pelosi’s short statement. You could call the bill passed a workers-first bill compared to the monstrosity she proposed.

Some of the pork Pelosi put in her bill made it into the final version. What does the Kennedy Center have to do with coronavirus? It received $25 million in the bill. Both Democrats and Republicans supported that portion.

The Corporation for Public Broadcasting (PBS and NPR) will get $75 million.

Pelosi’s bill also contained bailouts for the post office, almost everything the Democrats want to change about voting, federal employee collective bargaining, requiring airlines to offset their carbon emissions, forcing companies to have a diverse corporate board, etc.

At her press conference, Pelosi doubled down.

…says, "This is all about the coronavirus. It's not about anything else" pic.twitter.com/tkGyJOZVLB

After holding America hostage so she could get her partisan demands, Nancy Pelosi wants you all to be "prayerful." pic.twitter.com/0QbkPhtpjG

Pelosi is really looking into the camera right now taking credit for the stimulus bill.

Reminder that because of her millions of Americans had their checks delayed for:

Shes attempted to take credit for everything Trumps done so far why would this be different?

Let’s give Pelosi credit for the disaster that it is hidden in this bill.

This deal could devastate small businesses, by paying $600 per week extra unemployment benefits for four months, on top of a regular (in NJ) unemployment benefit of roughly $300 per week for most restaurant, retail and small shop workers (60% of their average weekly wage). The total of roughly $900 per week vastly exceeds the roughly $500 per week wages for such workers. These workers will also get the $1,200 payment plus $500 per child. For many months, this could make it very difficult for any business employing such workers to get them to return to work. Most such businesses do not have months to reopen and will just close permanently, damaging the small business backbone of many communities across America.

Uh… nah, that’s not my concern..
the fact that she included pay raises in the bill is beyond me….

No no, it’s worse. To qualify for payments you need only walk off the job. You dont have to qualify for state unemployment to get the federal money.my wife works at walmart. Makes 13 an hour. Her saying “I feel unwell” will net her a $2.00 pay raise for the next 4 months. Who wouldn’t do it? Besides my wife. We’ve become accustomed to poverty.

I would love to see the President at the signing “ceremony” list all of the pork Nancy and her coronacrats added to the bill. She can own that part of the bill.

Today March 20th 2020 is Nancy Pelosi’s 80th Birthday. Of course the House cannot consider the Senate Bill on such a day. Feel free to leave Birthday Felicitations below to Her Royal Highness.

According to https://www.timeanddate.com/on-this-day/march/26 Vladimir Putin was elected President of Russia on this day.

She has more in common with Putin than Trump does.

notamemberofanyorganizedpolicital in reply to amwick. | March 27, 2020 at 7:58 pm

Yes, she like most of the DEM top leaders will soon start their 9th decade of life…….

She is just babbling on, incoherently.

Has anyone seen her in the same room with Joe Biden?

notamemberofanyorganizedpolicital in reply to The Friendly Grizzly. | March 27, 2020 at 7:56 pm

Babbling Pelosi is her nickname.

I knew this was gonna happen. and if Trump doesn’t sign it, they will blame him.

the game is so predictable

Like any other prostitute, San Fran Nan knows a lot of positions. Hey you don’t like this position? I’ve got another one.

Doesn’t matter what position she takes–she is what she is.

notamemberofanyorganizedpolicital in reply to Comanche Voter. | March 27, 2020 at 7:56 pm

A total whore you say?

Joe Biden is not the only Dem bigwig who has lost mental clarity.

She is delusional, as are Democrats who vote for Democrats.

The media has her back. She can say and do whatever she wants, and she knows it.

But we know they are lying.

The Same people who indicted the President for withholding aid to Ukraine, just withheld aid from the United States!

She isn’t delusional, she is calculating. She may fail, but since she has no soul and can feel no shame, she will try anything. She is the WWW – Wicked Witch of the West.

She isn’t delusional, she is calculating. She may fail, but since she has no soul and can feel no shame, she will try anything. She is the WWW – Wicked Witch of the West.

Hopefully past the election and the seating of the next Congress in January with a more robust pro PDJT majority in HoR and Senate some of the more obvious extraneous items in this bill and a few other historically stupid or outdated provisions of law can be stricken. Here’s to hoping.

Pelosi is a congenital liar. In other words, a consummate Democrat.

What a loathsome individual.

When you look at pelosi in totality, she actually is a gangster, much as hillary clinton.

notamemberofanyorganizedpolicital in reply to TheFineReport.com. | March 27, 2020 at 7:54 pm

Her father was one.

His constant companions when he was mayor of Baltimore were well known Mafioso….

Pelosi can’t very well write a fund-raising letter that says, “The Republicans beat me and kept most of my wish list out of the final bill. Help pay for my re-election campaign so I can do it all again!”

So instead she claims credit. She’s a professional politician. She doesn’t mind that it’s all lies.

Pelosi molested me a taxpayer!

It’s too bad Trump doesn’t have the line-item veto. He would happily use it if he did.

notamemberofanyorganizedpolicital in reply to Eastwood Ravine. | March 27, 2020 at 7:52 pm

Time to bring a new version of it back.

Oh, and that 25th amendment on term limits for the Pres?

Shred it and give President Trump 3 more automatic terms.
That’ll get the Leftists to set their heads on fire.

If he signs this he will lose the next election. Hes the oy one that can stop what’s coming. Pelosi just nuked the supply chain.

My President is NOT going to lose. Let me just clue you in on that one.

We have some leftover paper bags filled with feces meant for hillary clinton.

PBS and NPR should NOT receive any money. They are non-essential businesses and are just the propaganda mouth piece for the Lunatic LibTURDS/DemonRats !!!

She will only be significant in history for her illegal coup attempt via hoax impeachment. Future U.S. history courses should include this example of how she violated her office and the U.S. Constitution. An example of what NOT to do and why she was ineffective.