“He is immediately a credible, strong candidate for United State Senate and he clearly puts that state in play.” 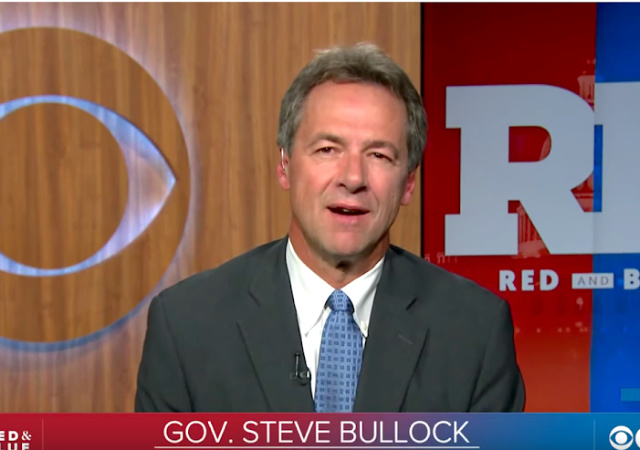 Democratic Montana Gov. Steve Bullock dropped out of the presidential race in December. He said he would not run for the Senate but that changed Monday morning.

Bullock announced his campaign via a tweet. His move gives hope to the Democrats to win the majority in the upper chamber.

Bullock changed his mind about running after he met with President Barack Obama in Washington in February. Senate Minority Leader Chuck Schumer traveled to Montana at the last-minute to beg Bullock to run.

Bullock will challenge incumbent Republican Sen. Steve Daines. The Democrats only need to win four seats in order to take the majority if President Donald Trump wins in November.

However, the Republicans “are defending 23” seats in 2020. Democrats are defending only 12 seats, but nine of them are in states Trump won in 2016.

The Wall Street Journal reported that editor and publisher of Inside Elections Nathan Gonzales called Bullock’s entry a “game-changer” since he “brings a seat that was previously solid for Republicans onto the battlefield of competitive races.”

Republicans and Democrats both expressed confidence in their parties ability to win the seat in November:

But Sen. Chris Van Hollen of Maryland, who chaired the Democratic Senatorial Campaign Committee last cycle, said Mr. Bullock’s decision to run in Montana would expand the map for his party, making Montana a top-tier race alongside tough contests in Colorado, Arizona, North Carolina and Maine. “He is immediately a credible, strong candidate for United State Senate and he clearly puts that state in play,” Mr. Van Hollen said.

Daines “stockpiled more than $5 million in campaign cash in preparation for the possibility that” Bullock would run for the seat.

Democratic Sen. Jon Tester holds the other Montana seat. He barely won his re-election in 2018.

It seems like he knows something the rest of us don’t he believes he’s already won.

Maybe he knows the fix is in.

notamemberofanyorganizedpolicital in reply to Yippy. | March 9, 2020 at 2:19 pm

When it comes to Today’s Democrats, the fix is always in.

The only help the Democrats need is with putting their other foot in the grave.

Funny how the Democrats always claim to take the “dark money” (is that racist for them to say that? Or at least unwokeness?) out of politics when their whole party is funded by the likes of Soros hidden through shell corporations and behind phony PACs.

While both parties are definitely corrupt to the core, the leftists take it beyond the Rubicon.

This country is in big trouble, having more Democrats in positions of power will only accelerate the issues and problems.

The Democrats only need to win four seats

They need to net four seats. Alabama for example flipping back offsets

after unequivocally stating he wouldn’t run,

according to a source familiar with his thinking.”

One thing you can bet on in today’s Democrats – they’re all cut from the same clothe as Hillary and Lizzie it would seem????

Very interesting article – all should read.

“On Wednesday the governor was in California attending a “Shoot with the Stars ….” in Burbank.

An official schedule provided by his staff also said he would participate in meetings with film industry producers and companies while in Los Angeles….

Recently, Bullock had visited with former President Barack Obama while in Washington, D.C…… And at the end of last month, Senate Minority Leader Chuck Schumer flew to Montana to meet with Bullock….”

“Does Steve Bullock have a #MeToo problem?”

“…articles claiming that he benefited from shady dark money, as well as ethics complaints….

Freaking Obama and Schumer? Two of the worst human beings on the planet

notamemberofanyorganizedpolicital in reply to gonzotx. | March 9, 2020 at 2:12 pm

“Personal visits” with both Obama and Schumer – so that reveals he’s
not independent at all, but just another corrupt Democrat Party Tool.

notamemberofanyorganizedpolicital in reply to gonzotx. | March 9, 2020 at 2:14 pm

In both the 2008 and 2012 Presidential Elections, Montana went Republican.

notamemberofanyorganizedpolicital in reply to gonzotx. | March 9, 2020 at 2:18 pm

His GOP opponent seems to be extremely popular with Montanans.

That reminds me of Obama’s Revere Midas Touch – everything he touches turns in to cow chips…..

Montanans should know that Obama and Schumer “just love” Bullocks.

1. Cross the two Ls with a magic marker.

The problem for long term residents of states like MT and ID and those of us that care about national politics in general, is that their populations are so small it doesn’t take too many nuts moving from CA, OR and WA to swing the state.

Same thing has happened in NH where former MA residents have now swung the state to almost assuredly blue. It happened in VT decades ago with former NY, MA and CT residents moving in.

notamemberofanyorganizedpolicital in reply to Massinsanity. | March 9, 2020 at 4:25 pm

So…… just a little bit if Democrat Party Election Fraud could…

Liberals flood the zone in the “beautiful” places while their populations are small.

There was an album out of england, “Never mind the Bollocks”. Pity it isn’t quite spelled the same.

Bollock is unlikely to get traction, at least not more than he did as a Presidential candidate (anyone else remember?).

Will AOC endorse him? Does he favor Bernie or Obernbama or whatever he said?

That makes no sense. How can you say he’ll get no traction, when he’s the state governor. That means the majority of voters have already voted for him once, and therefore must be expected to at least seriously consider doing so again. That doesn’t make him a shoo-in by any means, but it does make him a serious contender.

Probably another vote harvesting campaign for the stolen win.