“survey found Kennedy ahead of Markey 42 percent to 36 percent, a difference that is within the poll’s margin of error” 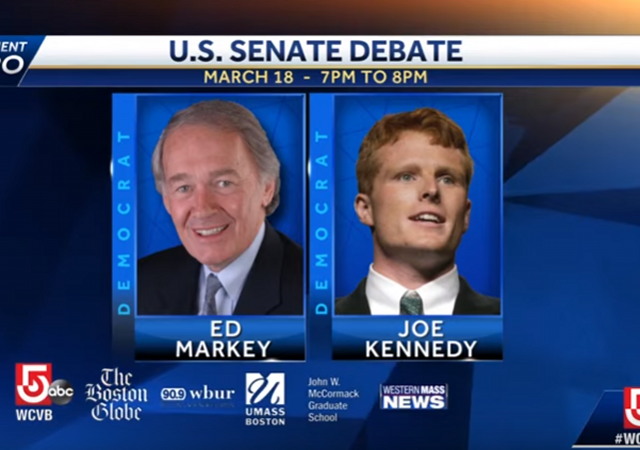 Markey has the backing of many established figures in the party, but Kennedy has opened a lead according to a new poll.

Five months into his audacious primary challenge against a seasoned incumbent, Representative Joseph P. Kennedy III is leading Senator Edward J. Markey in the Democratic contest for Senate, according to a new Suffolk University/Boston Globe/WBZ-TV poll of likely voters in the Sept. 1 primary.

The survey found Kennedy ahead of Markey 42 percent to 36 percent, a difference that is within the poll’s margin of error. The race has tightened since Kennedy first decided to mount his bid: A Suffolk/Globe poll conducted just before Kennedy officially entered the race in September found the younger Democrat leading 42 to 28 percent over Markey in a head-to-head matchup.

Markey has cut Kennedy’s lead in half, demonstrating that the incumbent “has a record and a personal history that have appeal,” said poll director David Paleologos.

“He’s a tried and true person,” said Xia Rondeau, a 26-year-old Democrat from Cambridge who is leaning toward supporting Markey.

But the survey had warning signs for Markey. After six-and-a-half years as a senator, and a cumulative 47 years as a Massachusetts elected official, he remains surprisingly undefined in the minds of many voters.

Markey has the same problem as many of the Democrats running for president in 2020. He is old, has been in Washington for a long time, and has little to show for it. His staff can undoubtedly point to a long list of his accomplishments, but most average voters wouldn’t be able to name them.

Other than his name, Kennedy has the advantage of youth in a party that is desperately seeking new people to put on their bench of upcoming candidates for office.

It’s probably safe to assume Kennedy has his eyes on a higher office than the United States Senate. Note the call to “fundamentally change” in this tweet. Sounds familiar, doesn’t it?

We can’t just right the wrongs of our past, we have to fundamentally change how we enact systemic reform. Advocates & activists brought us to this inflection point in our history, now it’s on us to make good on the promise of equal justice for all. https://t.co/bQs91scwac https://t.co/tKVboV8ifQ

Markey is not giving up his position without a fight.

Thank you @na_democrats for bring us together this morning. It was great to be surrounded by such a strong and resilient community of Democratic activists. pic.twitter.com/eqWxvX9BiP

As a Massachusetts resident, I am not a fan of the politics of either of them, but I find Kennedy particularly annoying. I don’t believe he would even hold his current job, but for his last name.

During the 2016 election, I was one of the many Americans saying no more Clintons, no more Bushes. I believe the same rule applies to Kennedys.

I actually agree with a point Kennedy made in January when he suggested people shouldn’t be able to profit from politically connected family members. He should take his own advice.

A primary election on September 1st will decide the race between Markey and Kennedy. Then the November 3rd election will determine the race between one of them and the Republican nominee, most likely Shiva Ayyadurai or Kevin O’Connor.

Just what the country needs. I was hoping we were rid of these trashy people.

notamemberofanyorganizedpolicital in reply to The Friendly Grizzly. | March 2, 2020 at 11:49 am

Leaves you wondering how the MA state got cursed so……

The Friendly Grizzly in reply to notamemberofanyorganizedpolicital. | March 2, 2020 at 12:07 pm

Headline should read, “Joseph P. Kennedy III opens lead over potted plant”. Markey is an embarrassment, a true dimwit who has never had a REAL JOB.

Can’t they both lose?

During the 2016 election, I was one of the many Americans saying no more Clintons, no more Bushes. I believe the same rule applies to Kennedys.”

The only good thing about the Kennedy’s is that they’ve been working as hard as they can to cut down on how many are left.

Compared to Ted and his father (Joe II) this one is actually pretty bright but I agree that we should be done with Bush, Clinton and Kennedy families in national politics.

Just one more in a long line of embarrassments in MA politics.

If it’s within the margin of error then it’s not a lead.

God you are such a tiresome fucking know it all.

I have no excuse for why I first read that as “tired and true.” I’ve had coffee this morning…

Hate to say it but between lesser of evil… Markey has to go. Even if it takes a stank-ass puking Kennedy to get him gone.

Markey will never rise above the current office while any Kennedy automatically assumes 56 years of propaganda canonizing the Kennedy name will lead to the Oval Office if you don’t kill campaign aides and keep the drinking and womanizing concealed.

Markey is the lesser evil.

“Markey is the lesser evil”

While true, Kennedy’s NOT going away. Sadly for us. Even if he loses to Markey, Warren’s seat comes up in 2024. Kennedy’s already plowed the row of “going against a D elder,” so challenging Warren will be no impediment. Besides, she’ll have the title of having lost her 2020 POTUS bid.

Kennedy’s a loon like the rest of them. He just carries himself better. Out in MA-1 we have another loon running for the House who prides himself on his loony-ness. (Yep, that kind of “pride” is part of his mix.) Long-time lefty Richard Neal, in his 70s, is ripe for the picking. Even if ultra lefty Morse doesn’t prevail in 2020, he’ll be back every 2 years until Neal caves.

42 percent to 36 percent, a difference that is within the poll’s margin of error

That’s a cryptic way of admitting that they polled something under 275 people. Not really a major effort, there.

I wonder if this is one of the type of polls meant to push agenda or opinion differently than it actually is.

Polling used to be more reliable, in that most polls were authentic in trying to gauge where people stand, not that push polling hasn’t been used as well.

I consider that state, as well as NY as lost causes for sanity.

I am against dynasties, which automatically makes me against Kennedy. Ted should have been the last to ever “grace” our political system. As Americans we rejected nobility and hereditary titles, yet far too often we have connected families who become entrenched because of name recognition as if that transfers over some hereditary abilities, and the Kennedy family is among the worst to capitalize on that. Clinton is trying to do the same, but Hillary lost, which dampers Chelsea’s hopes a little.

What is it with the people of Massachusetts and these Kennedy’s?

What the hell is so attractive about them?

All the men are soooooo handsome!

Being serious, I really don’t know. The only thing separating the Kennedys from the likes of meth-heads and beer-drunkards is their money and fame. Had Joe Average done what Ted Kennedy did, he’d still be in jail. The Kennedys can buy their way out of trouble, and, likely, DO.

I understand, Texas is afflicted with the little Bushes.

Great, a boy version of AOC

More ways than you may realize. His being a Kennedy, he likely knows more drink recipes than she does.

Best comment here, thanks for the laugh. It’s been a long day.

despite his diligent and sustained efforts to absorb some of our character and virtues, W will never be a true texan

he was not born here

Deport the Kennedy clan back to Ireland. Doe we really want to have a leader who bears the name of notorious prohibition-era gangster?

Mr. Frosty Markey voted against the USMCA Bill at a time when MASSPORT is trying to expand bringing in more jobs and revenue. The Conley Terminal in Boston will enjoy the benefits of the USMCA agreement. But idiot Ed Markey voted against a major project in his own state and in reality voted against new, well paying jobs for MASSPORT. The only thing Markey did in the Senate was take up space.