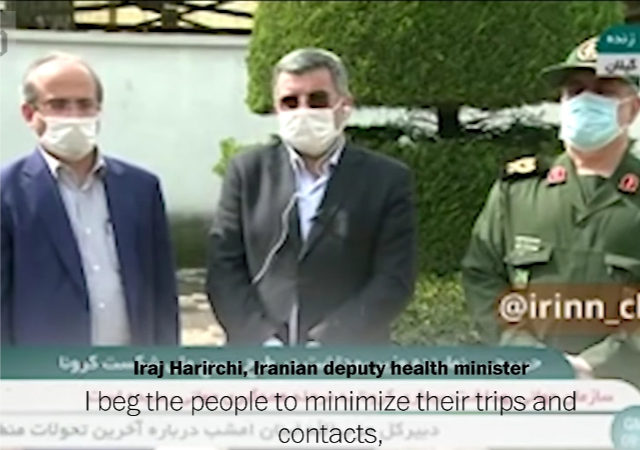 With coronavirus taking a heavy toll, the Iranian regime is digging mass graves to cover-up the real extent of the epidemic. The mass graves are so large that they can be seen from space. Recent satellite images show the regime digging mass graves in Qom region, some 70 miles south of Iranian capital Tehran.

Qom province is regarded as the epicenter of the coronavirus outbreak which has infected more than 11,000 Iranian so far, data collected by Johns Hopkins University show. While the official Iranian death toll is at 514, some independent sources put those numbers to be nearly double that size.

As Tehran continues to deny the existence of mass graves and downplays the outbreak, Iran’s Islamic Revolutionary Guard Corps (IRGC), the regime’s military arm and a U.S. designated terror outfit, has taken charge of dealing with the epidemic. “Over next 10 days, entire nation will be monitored via cyberspace, by phone and, if necessary, in person; those suspected of being ill will be identified,” Gholamreza Soleimani, the head of the IRGC-affiliated Basij militia said. Basij Forces have been charged with “emptying of shops, streets and roads,” newspaper Times of Israel reported.

British newspaper The Guardian reported the discovery of mass graves near Tehran:

Satellite images of mass graves in the city of Qom suggest Iran’s coronavirus epidemic is even more serious than the authorities are admitting. (…) They confirm the worst fears about the extent of the epidemic and the government’s subsequent cover-up. On 24 February, at the time the trenches were being dug, a legislator from Qom, 75 miles (120 km) south of Tehran, accused the health ministry of lying about the scale of the outbreak, saying there had already been 50 deaths in the city, at a time when the ministry was claiming only 12 people had died from the virus nationwide.

The deputy health minister, Iraj Harirchi, held a press conference to “categorically deny” the allegations, but he was clearly sweating and coughing as he did so. The next day, Harirchi confirmed that he had tested positive for the Covid-19 virus. (…)

Amir Afkhami, who has written a history of Iran’s experience of cholera epidemics, A Modern Contagion, said the mass graves add weight to suspicions the real mortality figures are much higher and are still being covered by the leadership.

“It doesn’t surprise me that they are now trying to create mass graves and trying to hide the actual extent of the impact of the disease,” Dr Afkhami, an associate professor at George Washington University, said.

He added that the close trading partnership between Iran and China, and the government’s fear of disrupting that partnership had contributed to the early and rapid spread of the disease.

“Because of China’s status as the country’s principal commercial partner, the Iranian government took inadequate cautionary measures to restrict and monitor travelers from China,” Dr Afkhami said. “Then, later on, Tehran’s lack of transparency and unwillingness to take robust measures such as social distancing and quarantine, particularly at the epicenter of the outbreak, helped spread the virus.”

The drastic measures come as an increasing number of regime official are getting infected by the disease, including the top commander of the Islamic Guard. In the span of just a few day, two of the top commanders of the terrorist organization have died of the virus. The top IRGC commander, Nasser Sha’abani, was reported dead on Friday, following the death of IRGC-affiliated Basij Forces commander, Mohammad Haj Abolghasem. He was known as the “butcher of Tehran” for his role in the bloody suppression of recent pro-democracy protests in which 1,500 Iranian were murdered.

Among those who succumbed the epidemic is also the regime’s top terrorist-turned-diplomat Hossein Sheikholeslam, who in 1979 stormed the U.S. embassy in Tehran and interrogated American hostages during the 444-day ordeal. Iranian Vice President Masoumeh Ebtekar, who acted as the spokeswoman for the hostage-takers, also tested positive for the virus.

There have been questions surrounding the health of the regime’s Supreme Leader Ayatollah Khamenei after two of his key advisers contracted the disease. Khamenei’s advisor Seyed Mohammad Mir-Mohammadi died of the virus two weeks ago.

Ayatollah’s another aide, Ali Akbar Velayati, was being treated for the virus. Velayati is wanted by Interpol for masterminding the 1994 car bombing of a Jewish center in Buenos Aires, Argentina. The terrorist attack killed 85 people, injuring hundreds others.

Iran has been particularly exposed to the coronavirus due to regime’s economic dependency on China. The flight activity between China and Iran also hint towards deeper cooperation between the Communist state and the Shia Islamic regime. According to media reports, Islamic Guard-run Mahan Air had been operating flights into China as late as February 24. The airline is known for transporting fighters and weaponry to pro-Iranian terrorist groups across the Middle East, a U.S. Treasury report in December 2019 found.

We can read a license plate from space so seeing graves from space is not really significant.

Allah’s will and evolution, working hand in hand. Is there a correlation between how often one bows toward Mecca and lack of reasoning?

notamemberofanyorganizedpolicital in reply to JusticeDelivered. | March 14, 2020 at 1:39 pm

I want all those Democrats/Leftists/Progressives/Socialists/Communists, Bernie, Ol’ Joe, Chuckie, Nancy, FeinStein, et. al….. to tell us about…..

“How great the Italian and Iranian SOCIALIZED hospital care systems are” again.

To quote Ace of Spades this week “160 ICU cases and the Italian health care system is OVERWHELMED!”

Shovel ready for BS, or graves?

notamemberofanyorganizedpolicital in reply to CKYoung. | March 14, 2020 at 1:41 pm

No is a really good time to settle scores with Iran.

I have thought this as well…

notamemberofanyorganizedpolicital in reply to Morning Sunshine. | March 14, 2020 at 1:42 pm

I pray they get salvation…..
by converting…..
to Judaism or Christianity…….

JusticeDelivered in reply to notamemberofanyorganizedpolicital. | March 14, 2020 at 8:02 pm

Unlikely they will convert, death really is the best option.

What scores? They NEVER sponsored terrorists on US or EU soil unlike Saudi Arabia, isn’t trying to kill our Shale oil industry, and the hostage crisis was 40 years ago.

Meanwhile China has destroyed our manufacturing base and is about to deny us medical supplies we need – we will feel what Iran feels, but although China has concentration camps for the Uhrguyrs, harvests organs from political prisoners, and was the cause of the epidemic, like Moe Bone-Sawman, Xi is still “our friend”.

It all started with bill clinton:

Iran, on the other hand, is paying to have us blown-up and our soldiers killed.

“hostage crisis was 40 years ago.”

Which means we owe them both principal and interest for their actions. And we owe them for all the terrorist acts, 40 years worth of terror. Iran needs a very strong dose terror.

I wonder if we could pay all that terror back in one month?

I wonder how many succumbed to a 124 gr intra-cerebral injection of lead-based terminalin. This is a good opportunity to eliminate some of the competition under the cover of global plausible deniability.

We are seriously in a phase of anything-goes now. Take a step back and tell me this isn’t like watching an episode of “Twilight Zone” playing out in real time. The propaganda is working so well that they haven’t even needed to play the “if it only saves the life of one child” card.

Oregon has 32 confirmed cases, 0 deaths, and yet the entire state has been shut down until April 1 (I know, ironic coincidence).

Of course, the unexpected freak snowstorm in PDX this AM is making things more interesting. I bet we have more deaths from cabin fever induced psychosis over the next 3 weeks than from the actual virus. Even my Hopkins-educated Public Health PhD ex-wife is not looking at this rationally and wants to “talk about” restricting our very healthy 17yo son’s activities. Hey, lets ask out that redhead in the back row of bio-statistics class; what could go wrong? 😉

“redhead in the back row of bio-statistics class; what could go wrong?”

The same thing that has gone wrong, and sometimes right, since the dawn of humanity.

What other country could have as foreign minister a man who allegedly planned a terrorist bombing that killed 85 innocents and maimed many more? To the cowardly and weak Islamofascists this is legitimate war making. Kill women and children while hiding behind the skirts of a diabolical and evil regime.
Next thing they’ll be attaching bombs to birthday balloons and floating them toward Israel. Oh wait….

Are you also cheering over Italy and Spain?

How many people need to die for a country to begin bulldozing mass grave trenches?

Recall imams lecturing westerners about muslim burial rites and how those rites must always be observed?

JusticeDelivered in reply to notamemberofanyorganizedpolicital. | March 14, 2020 at 8:25 pm

islam openly embraces liars, much like the group known as Black Liars Matter.

This is a WaPo story. Qom is a *big* city and mere flu deaths will still stack up. Iran most probably *can’t* test to see if somebody who died has flu or C19, so any deaths that *can* be C19 will be treated as such, with full gear and other precautions. Add in the wild paranoia that has most certainly been triggered by the flu/C19 deaths of several of their administration, and the whole country has flipped its lid.

With that in mind, it still seems as if Iran reacted to C19 far too late and in absolutely the wrong way. It will be interesting to see how this pans out a year from now, and how many of the media’s frantic handwaving panics are quietly swept under the rug for the next panic.

Wether the reports are true or not the question remains. During a typical flu season do the Iranians construct unusually large grave pits?

Maybe they had to “put down” a coup and its leaders?

They’ve been digging our grave for a long time.

Just curious as to how many car accident deaths there were in Iran during that same period.

From all vehicles or just Toyota Corona’s?

It’s not from corona virus. Those pallets of cash Obama sent were laced with small pox.

Someone in the CIA was wicked smaht 😉

Let us look at two numbers. The first is “in the bloody suppression of recent pro-democracy protests in which 1,500 Iranian were murdered”. The second is the reported 514 deaths from COVID-19 out of 11,000 cases, or 4.7% of cases. Which of these two numbers is larger?