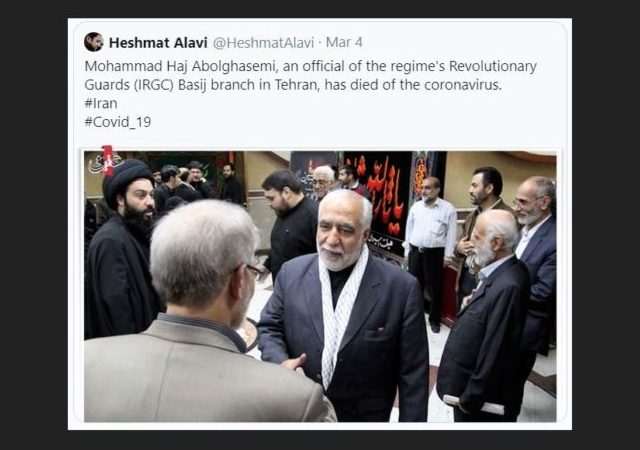 Coronavirus has killed a high-profile leader in Iran responsible for the U.S.-designated terrorist group Basij Forces, the Iranian news agency Tasnim confirmed. Mohammad Haj Abolghasem, a senior commander, was known as the ‘butcher of Tehran’ for his role in the bloody suppression of pro-democracy protests that began in November 2019, the Iranian exile group said.

Abolghasem’s Basij Forces took active part in crushing anti-regime protests. Over 1,500 Iranians were killed by the pro-regime forces during the clampdown. Basij and pro-regime forces were involved in gunning down unarmed protesters. They even used sharpshooters, as well as machine guns mounted on helicopters and pickup trucks, to shoot into crowds.

Basij Forces, affiliated to Iran’s Islamic Revolutionary Guard Corps (IRGC), were behind “terror plots and campaigns of mayhem across the region and are complicit in the recent murders of around 1,500 Iranians protesting for freedom,” U.S. Secretary of State Mike Pompeo said in statement in January 2020.

Abolghasemi is not the only high-profile Iranian terrorist to contract the coronavirus. Iran’s Vice President Masoumeh Ebtekar, who acted as the spokeswoman for the U.S. embassy hostage-takers in 1979, was also among the infected, state-run newspaper confirmed.

Another senior Iranian official has been killed by the coronavirus, Iran’s Tasnim News Agency reported on Wednesday, a day after Iran put its armed forces on alert to assist health officials in battling the virus, which has killed at least 77 people in an outbreak that has sickened top officials and pushed even supreme leader Ayatollah Ali Khamenei into wearing disposable gloves while trying to reassure the nation.

Mohammad Haj Abolghasemi, 71, was hospitalized in Tehran a few days ago and died on Tuesday, state media reported.

Abolghasemi was an intelligence officer and battalion commander in the Basij – the volunteer paramilitary wing of the Islamic Revolutionary Guard Corps used for internal security and other tasks, such as violent suppression of civilian protests.

Relatives of Abolghasemi told news outlets outside of Iran that he was apparently infected with the virus while on duty, after local authorities failed to issue proper warnings about avoiding large gatherings or physical contact.

As stated, Abolghasemi, was a senior commander in the Basij and served as an Iranian intelligence officer after the Iran-Iraq War.

Websites affiliated with Iran’s exiled opposition celebrated Abolghasemi’s death, calling him a “butcher” and a “hangman” due to the role of the Basij in brutally suppressing popular countrywide protests over the past year, in which hundreds of Iranian civilians were killed.

The high-profile casualties call into question the role played by IRGC in the coronavirus outbreak in Iran. Family members of Abolghasem told media that he contracted the virus “while on duty.” This is a interesting revelation given the media reports claiming that IRGC was operating flights into China as late as February 25.

“Revolutionary Guard owned Mahan Air has continued its flights to four Chinese cities in the past three weeks despite consistent denials by Iranian officials,” the Czech Republic-based Radio Farda reported last week. It is unclear why IRGC would operate secretive flights into China despite the known risk of outbreak.

After China, Iran has been worst hit by the coronavirus. At least 4,747 confirmed cases of the virus have been reported in the country. With death toll crossing 120, the outbreak in Iran is the deadliest outside China.

Good news! May there be more like him soon.

notamemberofanyorganizedpolicital in reply to Whitewall. | March 7, 2020 at 1:16 pm

It’s an ill wind that blows no good?

Bet they’ve got a lot of them to Barrack……

The Friendly Grizzly in reply to notamemberofanyorganizedpolicital. | March 7, 2020 at 3:50 pm

Or, as a teacher of mine described the oboe: an ill wind that no one blows good.

Allah’s will, all Iranian Mullahs should commit suicide to avoid Allah’s wrath. They should be aware that that the forfeit all virgins.

So we saved a drone strike.

“Mohammad, you only liked the holy shrine 53 times. The holy books of Islam say 59 licks are required, no more, no less. You are doomed.”

notamemberofanyorganizedpolicital in reply to fscarn. | March 7, 2020 at 1:24 pm

Shouldn’t he be in Iran busy licking monuments?

walls in reply to notamemberofanyorganizedpolicital. | March 7, 2020 at 1:32 pm

He’s busy licking something else … lol …

notamemberofanyorganizedpolicital in reply to walls. | March 7, 2020 at 2:32 pm

Guess “monument” is another name for them,
but I would have sworn they were called minarets……

I did not know that Obama was double jointed.

It’s an ill wind that blows no one no good.

As this virus has taken root in Iran’s Mullah’s and Senior Leaders perhaps the regime will have a change of leadership forced upon it. That couldn’t be all bad.

I wonder if the same dynamic might play out in North Korea. Is it too much to dream that there is a secret resistance group in North Korea who might deliberately have volunteers willing to risk death by trying to get close enough to Rocket Man to infect him?

notamemberofanyorganizedpolicital in reply to Hodge. | March 7, 2020 at 1:23 pm

The same saying came to my mind, and I posted it up thread.

Darn that old school education of reading down the page….

Given the age of most of those mullahs, this could lead to a real change in government.

Is it asking too much to hope that Covid19 topples the Iranian government?

Wouldn’t it be ironic that the women forced to cover their faces survive while the men all contract the virus and die. God works in mysterious ways. 😉

I’m not saying this happened, but hypothetically, if I’m a physician in Iran and this bloodthirsty murderer is brought to me as a patient, there *may* be a few errors in medication or treatment that would lead to negative outcomes. Now multiply that one by a few hundred involved in his treatment, and calculate the odds that at least one of them had family murdered by this creature…

No need to make medical mistakes. Just infect yourself a give them normal medical exams.

“Coronavirus? More like Coronazionist!”, the Ayatollah was heard to remark.

notamemberofanyorganizedpolicital in reply to mickshrimpton. | March 7, 2020 at 2:38 pm

You mean like Ben Franklin’s saying that
“Beer is proof God loves us.”

Don’t know about that…….

Think I’ll have a Corona!

It’s a dark cloud that doesn’t have a silver lining.

That faint popping sound you’re hearing in Iran right now is the sound of Iranians hauling out their secretly stashed bottles of champagne and uncorking them to celebrate this SOB’s demise.

I predict more of this in places that have a low standard of healthcare, and public hygiene. And lots of old/medically compromised people. Iran, African countries, North Korea, Venezuela and such.
Places that have high health care standards, good nutrition and such will fare much, much better. Us, Canada, parts of Europe, parts of Mexico…
It will be interesting to see how some countries come out of this pandemic.

Sometimes a virus is a good thing.

God has a wicked sense of humour ??

Their god has a wicked sense of humor, Allah is culling the herd.

I’ve read they have rampant UTIs over there. If they can’t handle a freaking UTI, they are screwed on this one.

I am reminded of an old situation comedy on TV , Maude, where a recurring line to her husband was “God will get you for that.”