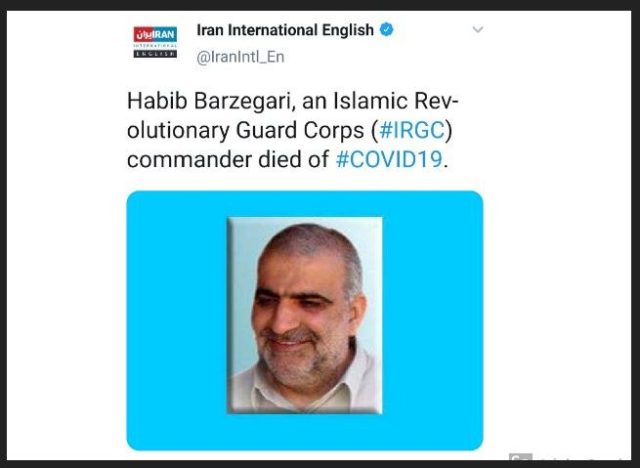 IRGC, created in the wake of the 1979 Islamic takeover of the country, has been behind numerous terrorist attacks in the West and the Middle East since its inception. In April 2019, President Trump designated IRGC as a terrorist organization as part of his policy of ‘maximum pressure’ on the Iranian regime.

The Wuhan coronavirus, which has gripped large parts of Iran, has also decimated IRGC’s leadership, crippling the Iranian regime’s ability to carry out acts of terror beyond its borders. The coronavirus has forced Tehran to scale back its international terrorist activities in the wake of the outbreak, the spokesperson for the Israel Defense Forces confirmed earlier this month.

Barzegari is not the only Khamenei aide to succumb to the coronavirus. Mohammad Mirmohammadi, another of his aides, also died early March after contracting the disease. Ali Akbar Velayati, Khamenei’s ‘foreign policy’ adviser, also tested positive for the virus. Velayati is wanted for masterminding the 1994 car bombing of a Jewish center in Buenos Aires, Argentina, which killed 85 people, injuring hundreds of others.

Barzegari was a founding member of the IRGC in the city of Meybod in Iran’s central province of Yazd, according to state media.

Barzegari was also an advisor to the representative of Supreme Leader Ayatollah Ali Khamenei in Meybod.

At least 16 Iranian regime figures have died from coronavirus since the beginning of the outbreak in the Islamic Republic.

IRGC, the Iranian regime’s military arm, has founded and armed several proxy terrorist groups across the Muslim world, foremost among them being the Lebanese terrorist militia Hezbollah. IRGC’s foreign terrorist wing, the Al Qods force is waging a terrorist campaign against the U.S. and allied troops in Iraq and is reportedly responsible for the murder of thousands of U.S. troops in the region. The head of the Al Qods forces, Qassem Soleimani, who died in a U.S. airstrike in December, was alone behind the killing of at least 600 American servicemen and women, the Pentagon disclosed.

Given close ties between Iran’s IRGC and Hezbollah, the life-threatening virus has been transmitted to the Lebanese terror militia as well. “Hezbollah members were reportedly infected with the highly transmissible contagion after coming into contact with affected Iranian military officials during a meeting in Beirut last week,” Israel broadcaster i24News recently reported. Both IRGC and Hezbollah are at the forefront of the jihad declared by Iran’s Ayatollah against the United States. The call to jihad, or all-out Islamic war, was renewed in January by the Iranian Supreme Leader in response to the killing of Soleimani.

Nationwide, the coronavirus has claimed 2,234 Iranian lives and infected close to 30,000. The U.S. has exempted all humanitarian and medical from sanctions on Iran.

On Sunday, Iran kicked out the international humanitarian organization Doctors Without Borders (MSF) from the country. MSF, headquartered in Geneva, Switzerland, had flown medical supplies to set up field hospitals in Iran. The presence of independent foreign medical personnel would apparently hamper the regime’s efforts to suppress the actual extent of the outbreak. Recent satellite imagery showed authorities digging mass graves to cover up its failure in dealing with the disease.

Instead of letting ordinary Iranians get medical and humanitarian aid, the regime chose to spread vile conspiracy theories. On Sunday, Iran’s Ayatollah Khamenei claimed that the virus, which originated in the Chinese city of Wuhan, was actually an American creation “specifically built for Iran using the genetic data of Iranians.” Rejecting a humanitarian offer extended by Washington, Khamenei, who is also the spiritual leader of Shia Muslims, accused the U.S. of seeking to spread the disease further in the guise of medical assistance.

It’s already saved us millions in missiles and wear-and-tear on aircraft and crews.

Any aid extended to Iran only serves to help them terrorize other people, most certainly we should let them die, it would probably be a good idea to help even more of them die.

We could become the hand of Allah’s will 🙂

Ahhh! Nice way to start off the day!

But can the virus stop their (non existent) nuclear weapons program?

I am hoping it will be revealed that we created a new generation of neutron bombs, by a demonstration of one on each suspected Iranian nuclear site.

Also, I worry that there are so many radicalized Iranians, that Iran may not be salvageable.

I thought an imam said it wouldn’t harm them?

I would be careful about cheering the deaths of the enemies of America. Especially those 10,000 miles away from our shores.

OTOH, Pelosi, Schumer, RBG, and Breyer might get infected and die from it.

I’ll set aside a moment to mourn next Feb 29.

I will wait until the 30th.

Since he didn’t die “in action”, he won’t get 72 virgins, but will get to spend a night of connubial bliss with Helen Thomas instead.

I wonder what her opening question to him will be . . . and will she say “thank you, Mr Advisor!” at the end of the night ?

Hopefully waking up the next morning to the sound of “I Got You Babe” on the bedside radio.

notamemberofanyorganizedpolicital in reply to persecutor. | March 27, 2020 at 5:13 pm

The Friendly Grizzly in reply to notamemberofanyorganizedpolicital. | March 27, 2020 at 8:58 pm

So God does have a sense of humour 🙂

It seems the Chinese and Iran were working awfully close to each other for this to have hit them so hard. China is the cause for this pandemic, and for the groups in Iran hit hardest, it seems to close the loop on what country is working with Iran to the detriment of the rest of the Middle East.

I don’t think these losses will be thought of as a dark period in this disease, as these leaders plot to destroy Israel and her allies. These are not good people. The world would not miss their kind, supporters of terrorism.

I would not be sorry to learn that more of the leadership there suffers a similar fate, but have concern for the innocent people who are crushed under this regime who will suffer because of their leaders hate.

Preferably the entire leadership of the country and any bureaucrats who enjoy their job.

The Communist Chinese Government won’t mind if they have to move Hundreds of Millions of their Chinese citizens into Iran – to take it over as their new “Living Room.”

If the people can muster their strength, now is the time for Iranian revolution!

All it takes is a sneeze!

‘Tis a truly ill wind that blows no man good…

Sometimes a virus is a good thing… and we saved a drone strike. .

or did it? easy way for the power structure to eliminate people that have maybe fallen out of favor. it could also be a way to get the west to stop hunting them. nothing is what it appears. the soviet union used similar techniques.

I hope it was long and painful and that he passed it on to the leadership of Iran.

It reminds me of an old TV situation comedy, Maude,with the recurring line “God will get you for that”.

Shucks, it’d take a heart of stone not to laugh uproariously at this news.