Benjamin Weingarten digs deep into Omar’s past and politics. 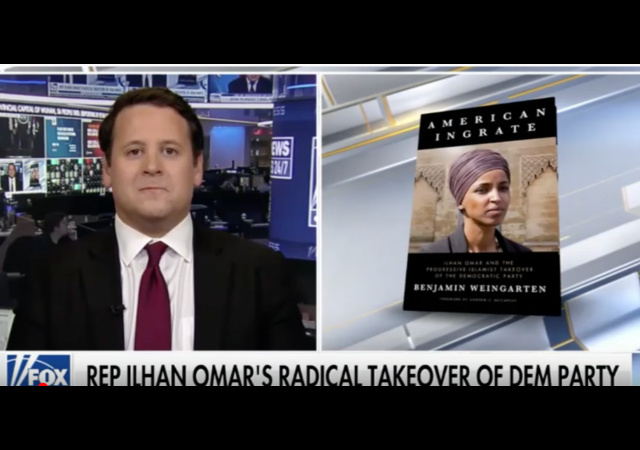 I must admit, I find few people in government more loathsome than Ilhan Abdullahi Omar, the U.S. Representative for Minnesota’s 5th congressional district.

However, being the Legal Insurrection’s designated “book reviewer” due to my serious book addiction, I was asked to check out Benjamin Weingarten’s American Ingrate: Ilhan Omar and the Progressive-Islamist Takeover of The Democratic Party.

Usually, I treat anything dealing with Omar as I would a coronavirus-infused tissue.  However, I went ahead and took the plunge, delighted with the solid writing and the organization of the extensive material Weingarten has gathered on the congresswoman.

Weingarten is a senior contributor to The Federalist, as well as the founder of ChangeUp Media (a media consulting firm dedicated to helping individuals and institutions advance the principles of individual liberty and limited government). Clearly, he has called upon that experience to take the first in-depth look at Omar’s entire history and current career. This way, Americans are more informed about the origins of her social justice views and how she tries to implement those policies as a member of the House Foreign Affairs Committee and Congressional Progressive Caucus whip.

As I am a student of Egypt, my favorite section of the book is the first, which traces family’s roots in the Horn of Africa and to find the origins of the Islamist-Marxist dogma she embraces. From listening to Omar, one would think her family was poor and homeless in Somali.

It turns out Omar was born to Somali political nobility.

It is understandable that an immigrant might at first feel alienated in a distant land with a foreign culture. But in the case of Rep. Omar, the challenge may have been particularly acute for a reason that has gone largely overlooked. Setting aside her disappointment in America given her expectations, and the identity-based lens through which she came to view her experiences so negatively, Omar may have been miffed because, by her own account, she had come from an affluent and evidently politically connected Somali family.

In the parlance of her progressive faithful, she was privileged.

…Omar received schooling in Islamic studies from a young age. Her family had sufficient food such that it could afford to share with the poor beggars who congregated outside its grounds. Given this comfortable upbringing in an undeveloped country reliant on foreign aid, it is evident that Omar’s family was part of Somalia’s ruling class prior to its descent into chaos and war in 1991. Left undiscussed when Omar has broached her background is the nature of the regime her family served.

Here is the ideology of the dictator Omar’s family served, quoted by Weingarten from The New York Times in 1977. which formed the foundation of her worldview:

President Siad Barre has often insisted that Marx and Mohammed are not only compatible but also complimentary, that the religious asceticism of Islam can combine with the concept of mass discipline inherent in ‘scientific socialism’ to forge a strong national will and lift the country from the ranks of the 25 poorest nations.

The book is broken into several sections that explore her background and belief system to impose a toxic, identity politics-based agenda. In addition to the thorough look at her personal history, Weingarten demonstrates that she is a symbol and a symptom of the super-woke progressive agenda, and describes the threat to national security that she poses.

Weingarten shows clearly that the presidency of Barack Obama paved the way for Omar, and the rest of the squad, to assume influential roles in the Democratic Party and to continue transforming it. Weingarten also connects the links between Omar and a variety of domestic Islamist groups with ties to the Muslim Brotherhood and terrorism and documents her significant relationships with foreign government figures that have a shared affinity for Islamism.

Weingarten was interviewed by Laura Ingraham when his book was officially released:

I give the book 4.5 stars out of 5. Weingarten packs a lot of useful information into straightforward and concise writing. He provides extensive quotes and offers plenty of links to the source material.

However, I found the subject matter highly disagreeable. Hopefully, Weingarten will find a more uplifting politician to write about for his next book.

I like that this book explores her upper-class origins as well as her political influences as well.

One of the most irritating weapons used by thugs on the left is the trope of selective outrage to confine a group of ‘victims’ to a plantation.

For example, not all black people come from the ghetto, but it is okay for a black who grew up with a silver spoon in their mouths to appropriate the language and posture of a black who did if it serves their agenda.

In fact, if you don’t, you are considered an uncle tom.

Books like this expose those thugs for what they are and I really appreciate this review. I look forward to reading it.

To me, “American Ingrate” isn’t the best description of someone like Omar. She and other Islamists have a very long-term agenda to take over the world. So, rather than ingrate, I’d say mortal enemy. Or even, enemy for all time.

I see Omar as representative of Muhammad the Barbarian’s character.

The question is what will the voters in her district do about her?

Reproduce like crazy on American welfare. They wage war with lots of babies.

Sorry to say, but NOTHING. Not all, but a majority of the voters in Minnesota are idiots and cowards to remove this POS.

Let us hope for some upcoming and speedy indictments for Omar for perjury, immigration fraud, etc.

I’d like to see that, but I don’t think anyone in congress has the stones to do it for fear of being call racist, Islamophobic or whatever the word of the day is.

Are we sure she is human?

The West should collectively declare that Islam is not a religion, and then deal with it accordingly.

We are the ingrates, she had deigned to come to America and is offering us the benefits of her wisdom and beauty. /sarc

“… the Islamist-Marxist dogma she embraces.”

Islamists and Marxists (“progressives”) are temporary allies in their war to destroy America and Western civilization. If they win, then each plans to kill the other.

… which is why it would be “game over” for the USA and the whole world if Bernie Sanders were ever elected President.

Bernie v. Trump would make the 2020 election one of real contrasts. It would really put it to the voters. Starkly.

“In which direction do you [the voters] want the country to head?”

The way of the Founders/Framers (with Trump acting as an imperfect proxy),

or, the way of the EU/USSR/PRC/UN (with Bernie as a model proxy)

Do we want freedom FROM government – which was the essential question with which the Framers wrestled – via limited, constitutional government whereby government itself is bound by law, or do we want total government.

Madison (Fed. 51) put it this way, “If men were angels, no government would be necessary. If angels were to govern men, neither external nor internal controls on government would be necessary. In framing a government which is to be administered by men over men, the great difficulty lies in this: you must first enable the government to control the governed; and in the next place oblige it to control itself. A dependence on the people is, no doubt, the primary control on the government; but experience has taught mankind the necessity of auxiliary precautions.”

The last time that the Which Way, America Question was asked, in 1964 (Goldwater v. LBJ), America made a big-time choice for Big Government. And it was a landslide: Johnson got 486 EC votes. To be sure a good chunk of his votes were sympathy votes based on Jack’s assassination, but still, the Democrats’ big government approach won bigly.

Phyllis Schlafly made the case for Goldwater with her book A Choice Not an Echo. Goldwater would have taken the country, especially through its foreign policy, in an Americanist direction. He would have brought to an end the CFR-controlled approach of America being the world’s policeman.

Along with this good book review is this interesting development in Londonstani.

From ACE of SPADES

City Hall sources have said it was “strange” that London Mayor Sadiq Khan was not invited to a meeting of the government’s emergency Cobra committee to discuss the coronavirus outbreak.

The meeting in Whitehall brought together senior ministers and health officials and was designed to signal a step-change in the government’s response to the outbreak, agreeing an action plan to counter the spread of the disease.

It was the first in a series of weekly Cobra meetings attended by prime minister Boris Johnson, who has faced criticism for failing to take personal control of the UK’s response.”

Leslie got a shout out and link to her great article of yesterday on Ace of Spades.

“A biochemist reviews the Trump administration response to the Coronavirus. Once again we see “The Press” is the enemy of the American people.

Fourth Point: Tune out the mainstream media.The press wishes to induce economic turmoil to harm Trump’s re-election and to make the coronavirus into his Katrina.

The media’s fear-mongering has the real effect of jeopardizing the welfare of millions of Americans, like my mother, who rely on their investments to pay for food, medicine, warmth, and other essentials.

Until the press decides that it wants to help the country instead of destroy Trump, it needs to be quarantined.

The #FakeNews hoaxes regarding Russia and Ukraine have been merely annoying. However, the Democrat/elite media hoax regarding the coronavirus is outright destructive.”

Leslie, the principle to keep in mind is “know your enemy”. Many of us personally loathe Omar/Elmi, and that’s all the more reason to expose her for all the world to see. There is data in this book that absolutely blows her personal narrative out of the water, very valuable oppo research for anyone who wants to run against her.

Hi Sonny’s Mom,
My thumb down was intended as a thumb up. I don’t know how to change it. You are RIGHT that we need to know our enemies. Of course that being necessary does not make the research any less distasteful. Poor Leslie–there just isn’t enough eye wash.

Apparently the thumb down has been changed by a moderator—hoorah! I just entered my thumb up.

No worries, I’ve made that mistake myself a time or two. The icons look so tiny on my phone screen.

Thank you for this. Media coverage about this genuine ingrate is so scarce. Every little bit helps.