“This is the problem with issuing purity tests you yourself can’t pass,” tweeted Pete Buttigieg’s senior adviser Lis Smith, quoting Buttigieg’s remarks to Warren from the December Democratic debate. 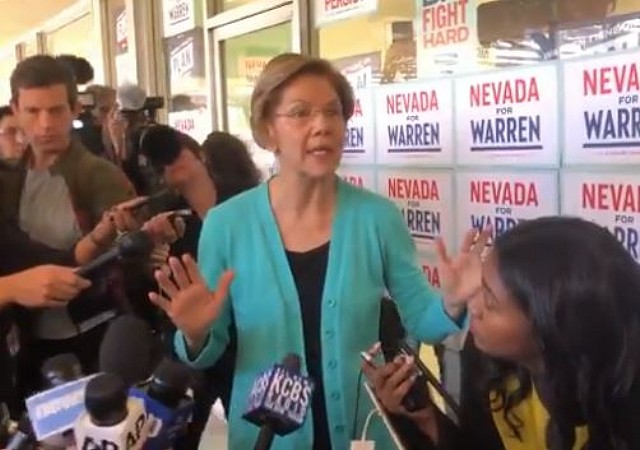 Since day one, Sen. Elizabeth Warren’s presidential candidacy has revolved around her promoting herself as the most principled and unconventional candidate of all those running. In fact, it’s her whole shtick.

She’s claimed she would never take campaign donations from big money donors and would never accept help from super PACs. And for candidates who did, her criticism was fast and furious.

For instance, when Joe Biden reversed course on his super PAC pledge in October, Warren publicly denounced it:

The Democratic primary should belong to grassroots supporters and grassroots donors, not the rich and powerful.

Every Democratic candidate should agree: Super PACs have no place in our primary. https://t.co/YnFP8KxjkS

Two weeks ago at the Democratic primary debate in New Hampshire, Warren declared that people who accepted help from Super PACs were trying to buy their way to the nomination:

Look, I don’t think anyone ought to be able to buy their way into a nomination or to be president of the United States. I don’t think any billionaire ought to be able to do it, and I don’t think people who suck up to billionaires in order to fund their campaigns out to do it. I heard everyone here talking about as Democrats, we all want to overturn Citizens United because we want to end this unlimited spending, yeah. Except everyone on this stage except Amy and me is either a billionaire or is receiving help from PACs that can do unlimited spending. So if you really want to live where you say, then put your money where your mouth is and say no to the PACs.

If we have to fund through billionaires, then we’re just going to be an America that’s going to work better and better for billionaires and not for anyone else.

And in a fundraising email sent on Feb. 12th, her campaign reminded supporters of Warren’s anti-wealthy donor/super PAC pledge:

But as has often been the case with claims that Warren makes, looks can be very deceiving. Not only has her pledge to only be funded by grassroots support been conclusively shown to be false, but the struggling candidate has now gone a big step further by way of doing a complete flip flop on the issue of super PACs.

Her rationale? It goes something along the lines of not being able to convince the other guys to do it, and it not being fair that the guys get to have all the fun while the women are left out:

But, on Thursday, Warren said that the fact that only the “two women” didn’t have super PAC support was “just not right.”

“So here’s where I stand. If all the candidates want to get rid of super PACs, count me in. I’ll lead the charge,” Warren said. “But that’s how it has to be. It can’t be the case that a bunch of people keep them and only one or two don’t.”

“So look, the first day I got in this race over a year ago, I said I hope every presidential candidate who comes in will agree – no super PACs for any of us. I renewed that call dozens of times,” Warren said. And I couldn’t get a single Democrat to go along with it.”

“Finally, we reached the point a few weeks ago where all of the men who were still in this race and on the debate stage all had either super PACs or they were mutibillionaires and could just rummage around their sock drawers and find enough money to be able to fund a campaign,” she said.

Watch video of Warren explaining her decision below:

NEW: Here is video of Warren declining to disavow the new super PAC supporting her:

“If all the candidates want to get rid of super PACs, count me in. I'll lead the charge. But that's how it has to be. It can't be the case that a bunch of people keep them and only 1 or 2 don’t.” pic.twitter.com/byxQRjGMfs

Operatives from current and former campaigns let her have it once the news broke.

“This is the problem with issuing purity tests you yourself can’t pass.” https://t.co/NXmwH6v2PE

Smith was quoting Buttigieg’s remarks to Warren from the December Democratic debate.

Lis is so right and this fucking infuriating. She pushed and created a purity that many followed for supposedly the betterment of the party. I wish Kamala would’ve had a super Pac. This is dishonest, but it’s ok because she can survive. Smh.

That Warren did a complete 180 on this was not exactly surprising, because she has a duplicitous streak that goes back decades. What I found offensive was her deliberate use of the words “men” and “women” to describe who had super PACs and who didn’t, as if their genders had anything to do with why they did or did not have one.

In fact, it’s especially interesting when you consider that the main reason Biden started accepting help from super PACs was that Warren was starting to catch up with him in the polls and he was losing fundraising support.

Blaming her super PAC switch on the patriarchy just comes across as pathetic and desperate – which, when you think about it, pretty much sums up her entire presidential campaign.

When things get tough, that’s when real character is revealed.

Democrats have no principles.

notamemberofanyorganizedpolicital in reply to fscarn. | February 21, 2020 at 6:03 pm

Lizzie will do anything and everything for money and power.

Much like the DNC itself money all you need.

If there aren’t flexible principles/policies, Walking Eagle couldn’t have any. I call this weather vane ideals. It depends on which way the political winds are blowing.

Will she use any of that money in legal settlement for the “Toxic work environment” she created for women of color. I’m surprised the super arrogant Bloomberg did not bring that up when questioned about NDA’s by Warren?

My guess is that she is about to bow out and wants to have the biggest war chest possible when she does.

Once you lose your integrity, the rest is simple. JR Ewing

Does this woman only own black tee shirts, black pants, and an assortment of colored cardigans? It’s not even a particularly flattering look for her.

A liar, a lunatic, a phony, a personification of entitlement, and a senile kook all ran for president…

…running against a bunch of other people just like her.

She gave us a promise, and then she took it away. You know what that makes her?

I heard everyone here talking about as Democrats, we all want to overturn Citizens United because we want to end this unlimited spending….

“So look, the first day I got in this race over a year ago, I said I hope every presidential candidate who comes in will agree – no super PACs for any of us. I renewed that call dozens of times,” Warren said. And I couldn’t get a single Democrat to go along with it.”
———————
As usual with ElittleBitzIndian warren, the lies just don’t stop.
And now that bloomingturd is buying leftist politicians in under every rock and sewer pipe the calls for killing off Citizen’s United have disappeared faster than a rabbit in a magicians hat.

Ah, I love a woman who stands by her convictions – not!

Just goes to show how she would cave if she gets in.

For every $10,000 contribution, I’ll send you special photos of the gray beaver. I’m Lizzie Warren, and I approve this message.

notamemberofanyorganizedpolicital in reply to walls. | February 22, 2020 at 2:48 pm

“For an extra $10 I’ll show how I can put both heels behind my head.” – Tin Lizzie Warren