“A female came up from behind me, spun me around, and punched me in the face and then grabbed my hat off my head and was just yelling, ‘How dare you.'” 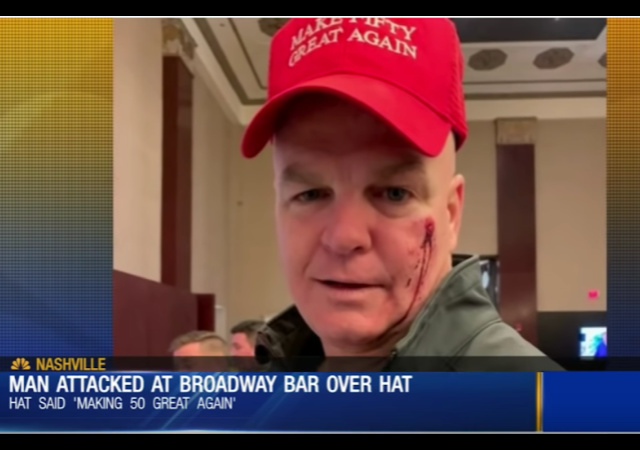 A retired NYPD detective in Nashville said a woman punched him at his birthday party over his MAGA style birthday hat.

Daniel Sprague was at The Stage bar on Broadway sporting a gift his wife gave him for his 50th birthday bash—a hat that says “Make 50 Great Again.” The hat is styled to look like a “Make America Great Again” hat that supporters of President Donald Trump wear.

“People were just coming up to me and, you know, just loving the little word play on the hat and taking pictures and wishing me happy birthday,” Sprague told News4.

However, one woman at the bar was not as amused.

“At one point,” Sprague said, “A female came up from behind me, spun me around, and punched me in the face and then grabbed my hat off my head and was just yelling, ‘How dare you.'”

The punch was hard enough to cut Sprague’s face.

The bartender kicked out Sprague and the woman before he could call the cops, but he filed a police report:

The Metropolitan Nashville Police Department confirmed that they took a report on the incident.

“Suspect grabbed his hat from his head and punched him in the face,” according to the report. “He stated that when the suspect hit him in the face, he did not hit her back.”

Sprague admitted he loves President Donald Trump, but said he would not “sit someone who had a Bernie hat on.”

The MAGA hat is a true trigger for snowflakes:

I think you meant *hit in your quote, not sit

Although someone with a Bernie hat may be in desperate need of a timeout to “sit” and think, I doubt they are going to be rational enough to do anything but go into attack mode.

Why did the bartender throw the dude out? He was a victim!

Maybe covering tracks of the puncher since agreed with her?

notamemberofanyorganizedpolicital in reply to alaskabob. | February 13, 2020 at 3:20 pm

notamemberofanyorganizedpolicital in reply to rdmdawg. | February 13, 2020 at 3:19 pm

It’s become normal procedure at businesses like these to remove everyone involved in an altercation from the premises.

1. People get offended too easily, so it’s best to remove all parties that could lead to an impression of the establishment’s position on a controversial issue.

2. Inaction to remove and allow any other incidents to happen could make the business liable.

3. Muted drama = resume business as usual, distracting drama costs revenue and may lead to others leaving in response. While some people may leave initially from the drama, others that arrive or those that didn’t notice much won’t be the wiser that anything happened and will carry on.

Not my rules…just the trends I’ve observed.

Think back to your school days. One kid cuts up, and the entire class has to stay after school. Or, some bully blindsides the class geek at lunch and a fist-fight starts. The bully is CLEALY the instigator, but is punished just as severely, and has just as bad a mark put in his cumulative record as the kid who already has a string of such entries.

It teaches collectivism at an early age.

In the early 1950’s, “red” as a color for much of anything… especially cars was out of favor as the Red Menace was threatening the USA (both from without and within).

So much for a “color blind” society.

Has anyone seen Greta today?

The left is observably far more violent than the right. Claims to the contrary by left-leaning individuals can be put down as Projection.

Hit her back. Just as hard. I mean, females are equal and just as tough, right?

The sad thing is that witches like this one, if sufficient incidents occur, will over time eliminate the natural male reticence to actually strike back. We will not be better for it, though if they believe there is significant risk of retaliation they might think twice and make us safer for it.

He should have detained her for the cops.

… who would do… what, exactly? Arrest the man for taunting her with the hat? Tell him he was “asking for it”?

This is only going to get worse. The crazed liberals will up attacks on people supporting their political opponents. Then they will threaten society in general, in order to get their way. And, the government establishment will do little or nothing to stop them. Get ready, the ride starts in just few minutes.

Anybody try and lay a hand on me would be sorry they did .

From this we learn two things: Nashville ain’t what it used to be and with women like that it is no surprise so many men have said NO to women.

There are lots of those things out there and who would want to come home to that?

From the looks of it the woman must have been wearing a ring on one of her fingers to gouge and bloody Mr. Spargue’s cheek.

I was at my credit union today and I noticed a woman narrowing her vision at me. Then I realized I was wearing a red Team Penske hat. I have a Brembo hat in the same shade of red. Funny thing is I do machine embroidery and made myself a red “Made You Look Again” hat as a gag.
I hope the folks who are triggered by red hats don’t spend much time around St Louis Cardinals fans.