“You won’t serve me because I’m wearing my hat, right?” 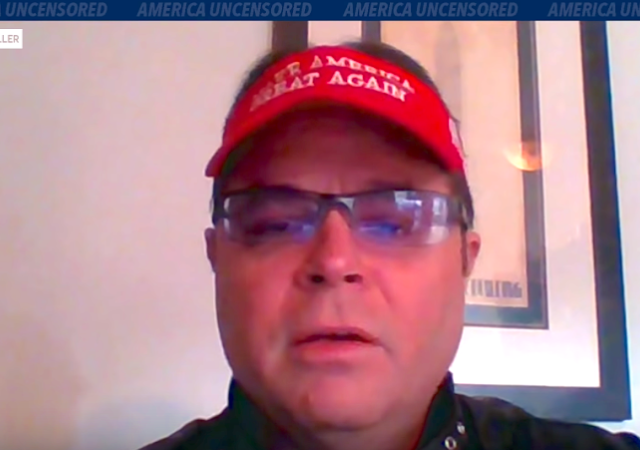 Jake’s Dilemma, a bar on the Upper West Side in New York City, has disciplined a bartender who refused service to Dion Cini since he wore a MAGA hat. From NBC New York:

He said a female bartender had been serving him, and when a new bartender started his shift he saw them whispering together and looking at him. “I knew what was going to happen so I started recording. I’ve been refused service before in New York City but I’ve never had service when they’ve taken my money and then kicked me out before I finished my food,” he said.

In Cini’s video, he is seen getting into an argument with the bartender about leaving the bar. The bartender reaches for Cini’s phone, and they have words.

“You won’t serve me because I’m wearing my hat, right?” Cini says in the video. The bartender replies, “Right.” Cini replies, “It’s a Trump hat, right?….It’s because the hat is red? You hate America?” Security calls police and Cini is escorted from the bar. Video of the incident has been viewed on Facebook more than 90,000 times.

In the video, Cini admitted that he had a tab to pay and paid it. But the bartender told him “correct” when he asked her if she refused him another beer due to his hat. From Fox News:

In a statement to Fox News, Cini claimed the female bartender in the video was the one who had wanted him to leave, and she was the one who instructed the male bartender to kick out Cini, at which point he started recording. He also acknowledged it was their “legal right” to refuse him service, but he also claimed he had ordered dinner and was eating at the time, “so in essence I wasn’t denied service… they provided me service and then kick[ed] me out for refusing to take off my hat,” he said.

“The bartender ran my credit card without asking me or without having finished my meal,” he added. “They continue[d] to ask me to leave and I kept asking him, ‘What for?’ and as you can hear in the video they said I did nothing wrong… Since I did nothing wrong, which would also include my hat, I refused so I could finish my meal and leave on my own terms”

A Manhattan Supreme Court judge ruled in 2018 that these establishments can refuse service to people in MAGA hats. But Jake’s Dilemma wants everyone to know their bartender’s behavior will not be tolerated. 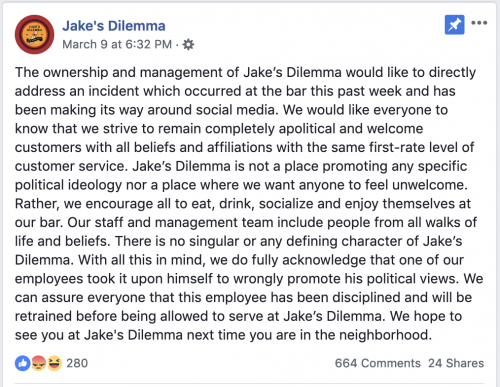 Cini spoke to The Daily Caller about the incident:

More evidence that a MAGA hat is not a symbol of hate. It reveals hate in others.

notamemberofanyorganizedpolicital in reply to Tregonsee. | March 12, 2019 at 3:45 pm

JusticeDelivered in reply to notamemberofanyorganizedpolicital. | March 12, 2019 at 5:36 pm

I am not a fan of of people filing lawsuits in their quest for the ghetto lottery, but in these cases suing the crap out of the business and the individual is in order. When the business fires this guy, let them off the hook. Then garnish the bartender’s wages until hell freezes over.

There should be periodic stories about people like this being sued and the hardships they face as a result of their actions.

“A Manhattan Supreme Court judge ruled in 2018 that these establishments can refuse service to people in MAGA hats.”

But they cannot collect money from him and then kick him out without his food.

Sue them for what? A business has the legal right to refuse to serve anyone, for any reason except those specifically prohibited by law. Neither hat-wearing nor political opinion are among those prohibited reasons.

But the right to refuse customers belongs to the owner, not to an employee acting on his own. By refusing to serve this person the bartender cheated his employer of the profit it would have made from that sale, as well as creating embarrassing publicity that could potentially harm business. (Though in NYC it’s unfortunately more likely to improve business; but that’s a decision to be made by the employer, not the employee.) So it’s no wonder the employer is upset.

The same place there’s the right in law to chop someone’s head off. Neither of these things happened.

If you think there’s a law against it, that applies in NYC, cite it.

Depends on the Courts and NYC Human Rights Commission interpret the word “creed” in § 8-107 of CCHR.

There is no room for interpretation of “creed”. In this context it’s an exact synonym for “religion”. Trumpism is not a religion. If it were then the first amendment would prevent him from being president.

This is all proof that Red causes Bull(-shi’iter)s to go into a rage…..

All of which makes individuals wearing these hats to be MAGAdors!

Correction: the color triggers an emotional response and a preference cascade, not limited to stalking, assault, discrimination, and confrontation.

And ironically, this all happens in the “reptilian brain.”

I’m not one who would want to eat or drink from something prepared by a server that wants me out of the place. God knows what I would be eating or drinking…..

Maybe these businesses should put a sign on their doors that only democrats are welcome in there.

If they want to cut their business by 50% or more, who are we to stop them?

Um, did you not read the post? The business wants Republicans and anyone else willing to spend money there. Which is why it’s upset at this employee who’s been throwing business away for his own private reasons.

I guess it really was Jake’s Dilemma

Keep it up, Democrats, and watch your party turn into a regionally-limited irrelevancy.

Kudo’s to the business for handling it appropriately.

Y’all ever notice how people in New York talk funny.

Is there some religion which considers the mystic incantation “Make America Great Again” anathema? If not, your comparison is weak.

What inconsistency? Wearing the hat is NOT protected by the law or the Constitution beyond the First Amendment, so any establishment (Like a church) can prohibit people wearing a hat from entering without fear.

However the freedom to practice one’s religion without interference IS protected by the law and the Constitution. Especially when it can be shown the government is being partisan and vindictive.

I think you need to go back to critical thinking 101 along with some Schoolhouse Rock when it comes to the Constitution. You have a very poor understanding of the latter and seem to not be able to do the former.

There are too many things wrong with that to deal with them all. So let’s just start with the false comparison between refusing to serve someone for his beliefs and refusing to adopt or parrot those beliefs. If the customer had insisted that the bartender wear the hat, he’d have been 100% right to refuse, and the bar would be wrong to discipline him for it. And if the CO baker had refused to bake the cake simply because the customers are gay nobody would be defending him.

I’ll leave the other problems as an exercise for the reader.

I see the apology didn’t bother mentioning Dion or any kind of reparation for the behavior of their employee. At the very least they should have invited Dion to come back with the hat and made the bartender (trained by aoc?) serve him and compliment his hat.

Disciplined?
Re-trained?
What about fired?

Let me get this straight. The New York Supreme Court okayed certain types of discrimination, is that right?

No, the NY court didn’t “okay” anything. It recognized the obvious and uncontroversial fact that there is no law against it. If you think there is one that the court overlooked, please cite it.

I wish people would wait to put on their MAGA hat until they are almost done eating or drinking. They might get booted with a full stomach for free and get to humiliate the leftist socialist fascist fools publicly!