REPORT: “Mini Mike” Bloomberg Stood on a Box to Make Himself Appear Taller During Mayoral Speeches

REPORT: “Mini Mike” Bloomberg Stood on a Box to Make Himself Appear Taller During Mayoral Speeches

Stats on his height are now trending in Google searches

Over the weekend, Trump tweeted about Bloomberg’s barrage of ads and in said tweets referred to the former mayor as “Mini Mike.” This one made me chuckle, silly as it is.

Bloomberg National Press Secretary Julie Wood focused issued a brief statement: “The president is lying. He is a pathological liar who lies about everything: his fake hair, his obesity, and his spray-on tan.”

But according to a groundbreaking report from the Washington Free Beacon, Trump might not be lying when it comes to Bloomberg’s vertical stats.

In a 2002 report on Bloomberg’s first mayoral press conference, the New York Daily News reported that Bloomberg used a box at his mayoral inauguration. “The box, however, ended up causing trouble; Bloomberg nearly fell while stepping off it as he returned to his seat,” the newspaper reported.

The same report indicated that the lectern at the front of the room was also shorter than the one used by Bloomberg’s predecessor, Rudy Giuliani, and while Bloomberg “alleges he’s in the ballpark of 5 feet 10,” he “is actually several inches shorter.” The city’s new mayor, the report said, is “somewhat sensitive about his height.”

…In 2015, Bloomberg needed to use “a step platform” when speaking at the same podium as de Blasio. The Post estimated that Bloomberg was “nearly a foot shorter.” That would place Bloomberg closer to 5-foot-5 than his purported height of 5-foot-10.

Because now this is happening: 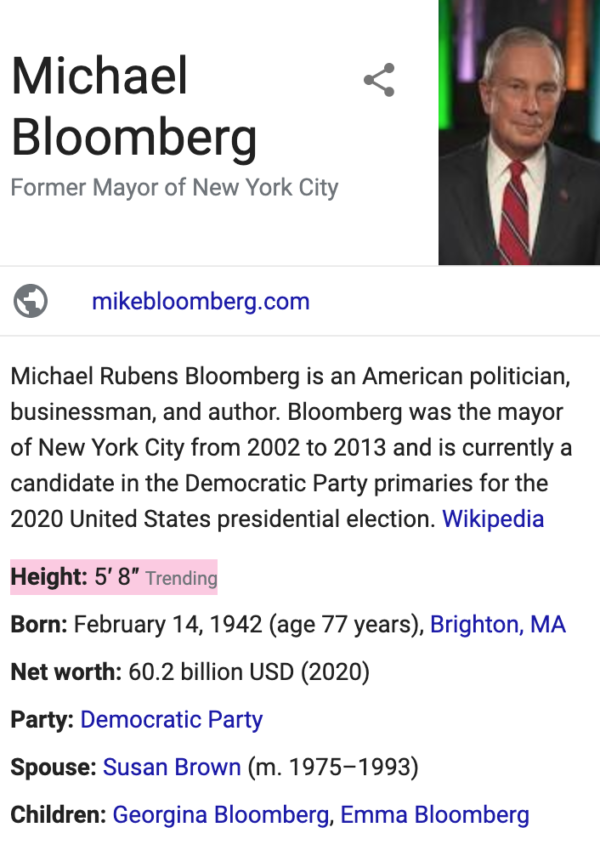 Why stand on a box when he can stand on pallets of cash?

How about Pipsqueak Mike?

Why stand on a box when he can stand on pallets of cash?

one of the reasons that this story resonates is that the DNC let Julian Castro stand on a box in every debate, and nobody was allowed to say anything about it. So it’s not hard to believe that they’d do it again.

The only job Julian Castro is qualified for is standing next to Ricardo Montalbalm and shouting “de Plane! de Plane!”

All that is missing is having been a corporal.

notamemberofanyorganizedpolicital in reply to The Friendly Grizzly. | February 5, 2020 at 9:05 pm

Does he call his dog Blondie?

PDJT reminds me of the high school friend who is so funny, but with whom you do not want to get into a shit-talking contest. You’re in his world and you lose just by going there. It’s incredible how M. Bloom can spend hundreds of millions to get a bit off traction, and PDJT can completely undo him with a few well-places tweets.

So does Mini-Mike have a mini Mini-Me?

I think mini-Mike IS his own mini-me.
Oops, I accidentally pushed thumbs down, when I meant to push Reply. No one hates your comment!

“I accidentally pushed thumbs down, when I meant to push Reply.”

This happens a lot. Some sites allow reversing the vote by clicking it a second time.

And Mayor Cheat is losing the Gay Vote. Let’s keep an eye on this.

Gay voters want their vote back after they realized Buttigieg was just pandering, the way Obama does to black Americans, Hillary to women, Warren to feminists, and Bernie to college kids.

Once you’ve got them duped, you can move on to the next special interest victim group.

I liked him on Fantasy Island. De plane, boss…de plane!

Upset gay bar owners showing up for the POLE.

SNL, when it was somewhat amusing, had a Bush-Dukakis debate with the avid Jon Lovitz playing the height-challenged Dukakis and solved that issue with a lift.

Today, Schumer said, to get the floor deliveries a accomplished, pages were working extra Schiffs . Ha.

I’d much prefer Minnie Mouse to mini-mike. She can stand on an orange-colored cheese box.

That might get him up to Trumps belly button

If, by chance, little Mikey makes it to the Presidential debate stage, DJT should ask for and stand on the same size box. Even if for just a while.

Five foot ten. Right. So, what else will he lie about?

I don’t see that thing with the box as being so awful, though. He can only elevate himself on something, or—Holy Procrustes, Batman!—make the rest of us shorter.

Nothing much he can do about the bad jokes, though . . . You know, “The candidate will be here shortly,” stuff like that.

I just had a flash vision of a Bloomberg-Reich ticket showing a podium with just a forehead visible on the left and a patch of gray hair visible on the right.

Might be a good time to introduce some napoleon memes.

An army travels on its stomach, and we could have a picture of Bloomberg handing out meals in extremely downsized containers while a splendid feast is visible on the table behind him.

I once taught at the same university as Mike Dukakis, and I would often find myself in the same elevator with him on our way to classes. He was always decent and polite to me, and he was very sweet. He was also super short, I’m 5’6″, and I towered over him (granted I wore heels a lot back then), but I never got a Napoleon complex vibe from him. He was comfortable in his own skin and came across as very sincere (yeah, that tank thing was totally phony, but I’d bet dollars to donuts it wasn’t his idea and that his team had to work long and hard to get him into that tank).

My point here is that I have no doubt at all that Dukakis would not be in the least troubled by the “mini” designation (I have no way to verify it, but the guy was short, like 5’4″ or so; I did walk with him when not in heels, and he was still shorter than me by a good bit). He was always good-humored and self-deprecating, so my guess is that Trump wouldn’t even go after him for height . . . because it wouldn’t have worked with Dukakis.

Trump hits that sweet spot in his branding, that one thing that will hit a nerve not only with the American voter but with the target. He hit it out of the ballpark with Nanny Mini-Mike.

One day back when I worked in an open office, some coworkers were conversing over on the other side of the room when one of them claimed to be 5’9”. I got a laugh out of the girl next to me by simply turning to her deadpan and saying, “I am five foot seven.”

As she well knew, I had at least a full inch on the other guy.

The speaker was far from the shortest male we worked with. That honor went to a dude from Philly who completely didn’t give a shit that he was like, 5’3” with his sneakers on.

The telling blow on mini Mike isn’t that he is short. It is that he reacts by trying to bullshit about his (lack of) height.

I saw Jimmy Carter in person, and he seemed short. But the book says he is average height.

Is it Bloomberg or Moonberg? The guy seems disconnected with tyrannical tendencies.

Trump is so good at this. He lives in their heads rent free until they explode. Like the movie Scanners.

Let us also not forget that he refused to comply with the 2 term limit and insisted on being able to serve a 3rd term. And they are afraid of President Trump’s ego? We do not need Bloomberg telling us how to live our lives.