“When two other adults stepped in, Bradley allegedly assaulted them too. He is also accused of throwing Trump campaign signs and attempting to knock over the tent.” 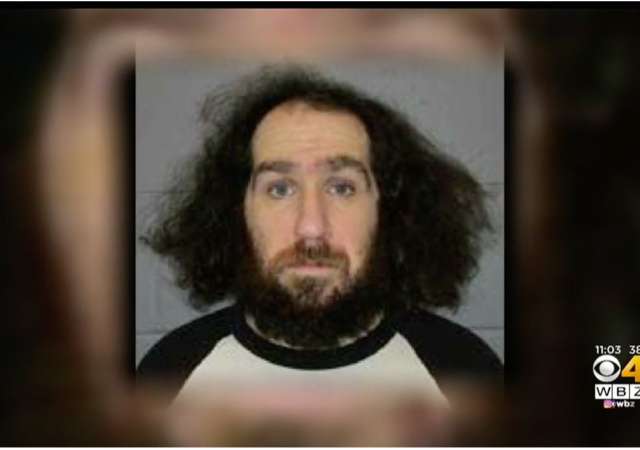 The boy was in a campaign tent for President Donald Trump with other supporters and workers. When two other adults stepped in, Bradley allegedly assaulted them too. He is also accused of throwing Trump campaign signs and attempting to knock over the tent.

Just the day before, President Trump held a rally in Manchester to energize his base.

The boy’s father told WBZ-TV that when his son showed up at the polling location he was excited to have a way to take part in the election process. He even had his picture taken with Donald Trump Jr.

Trump Jr. later tweeted out the photo with a caption saying in part: “Just got off the phone with him & his mother. I thanked them for being such strong supporters. My family has your back…”

So it turns out that I actually met the 15 year old victim shortly before he was attacked by a sick leftist.

I asked an aide to find his number & just got off the phone with him & his mother. I thanked them for being such strong supporters. My family has your back Nate! #MAGA https://t.co/1u5vOB9VwW pic.twitter.com/uZtcE9ABVp

Yesterday I blogged about a woman allegedly slapping a man in Nashville because he wore a MAGA style hat. How about the man in Florida who drove his car into a Republican voter registration tent?

What is it with these people? I thought they were supposed to be the tolerant ones?

I just do not get it.

I get it. The Democratic Party, including the DNC, as well as various PACs, have been paying for violence against Trump supporters, in order to blame the violence on Trump. This was in the 2016 DNC playbook, as well as in the payments database. Prominent Democrats have been publicly calling for violence against Republicans, Trump, and Trump supporters. Project Veritas has footage of a Democrat explaining how Party operatives can get weak-minded fools to do their dirty work.

Look at the “alternative” Newspapers still in print. All of them are running ads for “campaign workers” and social protesters – $16.00 an hour – lunch and transportation included.

I hope he learns from this. This is exactly what happens when you leave your parents basement. Next time stay there.

I disagree, the kid should not be subject to being attacked. Perhaps the best way to deal with this is to have four brawny bouncers on duty. They should restrain and hogtie the person who committed the assault. Then wait a few hours to call police to take them in.

I disagree, the kid should not be subject to being attacked. Perhaps the best way to deal with this is to have four brawny bouncers on duty. They should restrain and hogtie the person who committed the assault. Then wait a few hours to call police to take them in.

Where are the armed citizens? You see a forcible felony being committed against a youth by an adult and you have license to use lethal force, if necessary, in lawful defense of another to stop the crime.

I, for one, am happy for the restraint.

Don’t get me wrong, I want karma to ruin this guy’s world, but the optics being what they are right now, we don’t need more media spin against conservative ideologies (and wails of violence mongering) in an election year.

Slapping someone is not a forcible felony that justifies the use of deadly force in return.

Should he have got a beat down? Hell yeah. These violent leftists need to understand there is a cost for their violence.

But use of deadly force when it’s not justified? You’re just asking for the victims to go to jail and prison.

Hmmmmm…… Maybe you really are Barry……

the problem is you don’t know or can’t predict where the beating would end with out intervention, the perpetrator could have easily killed the kid, so now when do you intervene with deadly force

LI contributor Andrew Branca can provide you with a pile of information that will help you learn just what rules apply to the application of deadly force. You should really pursue it as your apparent current level in this regard doesn’t cut it, and you are at risk of doing some serious prison time.
“Lawofselfdefense.com”, I think.

If the violence rises to the level that deadly force is justified than you do what you need to do to protect yourself.

But that didn’t happen in this case. The idiot slapped the kid and got into a shoving match with others who stepped in.

Deadly Force is not justified in this case.

Let me say it again: A slap across the face is not justification for you to use deadly force whether or not you’re the one being slapped or a witness to the slapping. If the physical attack continues it could rise to the level where deadly force is justified. That did not happen in this case and Barry Soetoro the person I was initially responding to is WRONG to say a forcible felony occurred. It didn’t.

From a different article (which also focuses almost exclusively on the teen):

“Campbell said that a man, also wearing a MAGA hat, came over to intervene. According to Campbell, that man now has a fractured jaw.”

As Isaac Azimov pointed out “Violence is the last refuge of the incompetent.”
As many conservative commentators have noted, the Democratic party has no coherent policy on which to run.
Any one who paid attention in history class knows socialism is a failed ideology which has directly caused the murder of hundreds of millions of people. Sense people will not willingly embrace socialism they must either be bribed or intimidated in to it.
This is a practice the Democratic party is all to familiar with.

With all due respect to one of my one time favorite authors, Azimov wasn’t the one getting slapped in the face. Self defense (or defensive support from an outside agent) is an intelligent response to an attack.

With due respect perhaps you should reread my comment above.
I was not referring to the decision of self defense. Rather I was speaking to the propensity of the Democratic supporters to use violence as a tool of intimidation.

I understood that, and wasn’t arguing the point. I was simply making a counter-point. One’s attitude toward violence is situational and his comment was overly simplistic.

I for one really hope there is a brokered Democratic Convention and Bernie is cheated.

Than the left’s violence will be on full display for the country. Lot’s of people who pay no attention to politics and the violence of the left will have their eyes wide open in shock.

There will be no more glossing it over and pretending violence only happens on the right.

Another myth permanently, that of leftists being peaceful, busted.

Like Charlottesville, they’d just blame it on the right.

They could try but it wouldn’t work.

The same thing happened to the Democrats in 1968. You simply can’t blame Republicans if you have riots at your own convention.

Especially if the trouble is caused by people upset that Bernie got robbed.

If that fellow would like to attend a Boston area republican event I’ll be pleased to “debate” with him and may even give him a haircut.

And his badly-needed electroshock therapy?

That boy has yet to meet Mr. Cattleprod. SOB will see the light and learn the fright.

It’s funny how the vast majority (if not “all of them”) of these real attacks are left on right.

Just as “funny” is how the vast majority (if not “all of them”) of right on left attacks are straight up leftist hoaxes.

because the “right” doesn’t defend themselves, like in this case what do you think would make the news cycle, the fact the kid was attacked or the kid defended himself, when Andy Ngo was attacked how long would it have taken the police to show up is the attacker was beaten into the ground

I agree that too many cheeks have been turned.

Something is wrong with the booking photo. He doesn’t have two black eyes.

Still has some teeth, too. My steering wheel lock is a great orthodontic adjustment tool.

This kind of incitement has been a major goal of the left. It’s classic fascist b.s.: brownshirts, Mao’s (Antia Dunn) red guard

The sh*t is hitting the fan. We must fight back, each and every time.

Note that there were others injured. Per a different article, an adult who came to the teen’s aid got his jaw broken.

Looked for more supporting evidence of that, I can’t find it. Articles saw he assaulted two adults who came to the teen’s aid, but no description of injuries. The original story I saw was quoting the Mother of the teen, so she may have been mistaken or being hyperbolic (i.e. got his jaw busted!)

Yesterday, Fox News quoted the boy’s Mother about a fractured jaw:
“Campbell said that a man, also wearing a MAGA hat, came over to intervene. According to Campbell, that man now has a fractured jaw.”

Today, a local TV station reported about the thug’s arraignment. The fractured jaw has been downgraded: “A man ran to help, and Bradley allegedly punched him in the face, loosening a tooth, and then pushed another man who tried to intervene, prosecutors said.”

The charges are 3 counts of simple assault and one count of disorderly conduct.

That’s why there are civil courts, for remedy of torts–tort courts!

An observation: he has the shoulders of a trout.

That guy bears a striking resemblance to some well known leftist radical from the past, but the name escapes me. Charles Manson, maybe?

Lots of things. Did you notice that not one of the bernie fascists who were openly talking about violence should bernie lose in Wisconsin has been fired? Talk about encouraging violence and that is a prime example.
Or how about open up your finances so they can take what they want without penalty. Millionaires and billionaires aren’t really the target, you are because you’ll be a law abiding citizen they can pillage at will.
Give up your Christian values so they can sodomize each other and your children. Notice how much more they’ve been sexualizing children since gay marriage became a big topic?

Guys like this are why I have the little pouch on my belt that people get curious about, it contains of small can of non-lethal pepper spray or foam (depending on which one I grab). Mr. Wack-a-mole Manbun there could have done with some more seasoning in his life, the kind that sticks no matter how much you rub.

Someone ever laid a hand on one of my kids they would be very sorry that they did. Very sorry.