“The DNC will not allow Cory Booker on that stage, will not allow Julian Castro … but they’re going to allow Mike Bloomberg because HE HAS A BILLION F**KING DOLLARS?!” 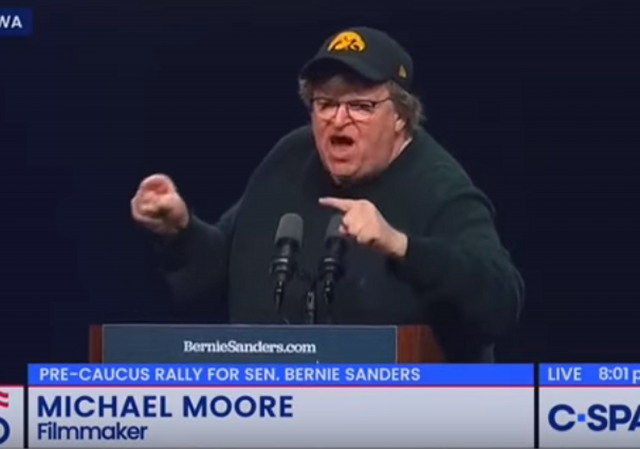 A few months ago, Cory Booker wanted the Democratic National Committee to change their debate rules so he could qualify for a debate, but the DNC said no. Now the DNC is changing the rules to accommodate Michael Bloomberg so that he will appear in the next debate.

The DNC’s new guidelines, effective for the Feb. 19 debate in Las Vegas, require that candidates get at least one delegate out of the upcoming Iowa caucuses and New Hampshire primary, or reach at least 10% in four national polls or 12% in two state polls. To qualify previously, candidates had to reach a polling and a donor threshold.

Bloomberg put more than $200 million of his own money into his presidential campaign as of Dec. 31, according to the latest figures filed with the Federal Election Commission.

People on the left can see what’s going on, and they are not happy about it. During an event for Bernie Sanders in Iowa, left-wing filmmaker Michael Moore went off on the DNC over this.

Michael Moore ripped into the new debate standards set by the Democratic National Committee, arguing that they would allow billionaire Michael Bloomberg to buy his way onto the stage.

Moore took the stage Friday at a rally for Independent Vermont Sen. Bernie Sanders in Clive, Iowa, and ranted about the new rules in an expletive-filled speech.

“The DNC will not allow Cory Booker on that stage, will not allow Julian Castro … but they’re going to allow Mike Bloomberg because HE HAS A BILLION F*CKING DOLLARS?!” Moore shouted.

The theory floating around in political media right now is that Bloomberg is running to be a backup candidate if Joe Biden implodes. Does it sound like the Bernie wing of the party is going to go along with that plan?

1. ⁦DNC members didn’t vote on this, or any of the debate rules.

2. Every candidate and every donor who gave to that candidate who played by the rules (to date) should voice outrage at Tom Perez.

3. Perez will never be Governor of MD by doing this https://t.co/p0HEXmoukR

The DNC drastically changed its debate requirement rules to ensure the inclusion of Mike Bloomberg, mostly because he’s a billionaire.

Right before the change, he donated $325,000+ to the Democratic national committee.

2. Bloomberg SHOULD be on the debate stage at this point. The reality is that he has bought himself into contention and shouldn’t be able to avoid scrutiny by moderators and competitors.

How much do you think Bloomberg bribed the DNC to get them to change the rules all of a sudden?

Every other candidate that has previously complained about the qualifications were told that “the DNC will not change the threshold for any one candidate.”https://t.co/cOZpT4osCT

It doesn’t even matter if the DNC had good intentions here. Perception is everything, and this looks terrible.

Moore’s the pitied, is all I can say.

He’s right, if they had any ethics they wouldn’t change the rules.
The truth is that Booker, Castro and the other has been’s fell out because they were terrible candidates that couldn’t even appeal to very many on the loony left much less mainstream America.
The real reason they’ve allowed Bloomberg in is that they realize none of the present group has a snowballs chance in November. They see Bloomberg as their only hope.
And it doesn’t hurt that he can largely self-fund his campaign, leaving the other Democrat loot to be spread around in other areas.

notamemberofanyorganizedpolicital in reply to Halcyon Daze. | February 3, 2020 at 6:53 pm

Someone tell Mikie that the DNC only rigged it a mini-bit for Mini Mike!

Can’t stand him – but can’t say he’s wrong on this one.

Stopped clocks are right twice a day, too.

( . . . and Streisand totally jumped the shark endorsing Adam Schiff for President – “Adam Schiff is so impressive. His knowledge of the law… his passion… his articulateness. His sincerity! He speaks the truth and would make a great president.” )
( . . . maybe Stacey Abrams could be his running mate . . .)

Why, Dems are just like a huge basket of deplorables.

Actually, while I do think Bloomberg bought his way onto the debate stage and that’s a bad thing, in some way it’ll be good for the public to see/hear how left his ideas are. Mike wants to revert to Obama era taxes and undo Trump’s tax cuts. Mike is all about closing coal mines and making America “green”. Don’t get me started in Mike’s gun grabbing plan. Mike is far more left than Biden.

Be afraid of Mike. Be very afraid. He would not be good for America.

DNC voters had their chances to back Booker, Castro or other POC, but they rejected them.

Is that the “Racist GOP’s” fault?

The GOP?? How could you claim something so crazy? It’s OBVIOUSLY Trump’s fault. He has a secret army of Oompa-Loompas carrying out his bidding and it is *they* who are infuencing the DNC by, uhm, mind control rays, ya thats it. He forced them to all shove their heads where the sun don’t shine.

Anything but the DNC Nomenklatura, couldn’t be them, the same one’s who put in the fix for the Hildebeast and tossed Bernie under the bus. They’re the People’s Party, and all that. Right? O.o

We really should have a “Which Way, America” election. A choice of contrasts via Trump as a proxy versus Bernie as a proxy.

Under (A), rights are pre-existing and inalienable, inherent in each person by simply existing. Government is organized, with the consent of the governed, and most importantly with defined limitations, solely to protect those rights.

Under (B), rights are “granted” by government which exists unto itself regardless of the consent of the governed, acting as the final arbiter. Here, what government “gives” can as easily be taken away. And with (B), there are no limiting principles placed on governmental power.

That kind of election would give some clarity.

a fat old white dude who cheats his way out of paying “his fair share” gets a podium because……..why???

I agree! And then there’s Michael Moore!

“The DNC will not allow Cory Booker on that stage, will not allow Julian Castro … but they’re going to allow Mike Bloomberg because HE HAS A BILLION F*CKING DOLLARS?!”

Does Moore not know that money is the only factor that counts? Is he really surprised, or is he just angry that his own donations weren’t big enough to buy a candidate?

When will those folk be actually upset enough to stand up and say something like “You don’t want us, so now you won’t have us.” And encourage people not to participate, or they start their own party so things can be done the “right” way (their way). Of course they won’t. That takes guts, a commodity sorely missing in most politicians.

So, basically, there’s nothing but good news out of Washington and Hollywood this week.

I fail to see why people are surprised.

For once I have to say they are right to be outraged by this: it is blatant cheating! Whether or not it will work out for Bloomberg remains to be seen.

Dem voters forget that just like in the debates the Dem Central Committee will run their lives without their approval if in power. They haven’t grasped that there is a wealthy powerful 1% running their lives within the party. The Dem voters deserve a dismal life under a USSR-V2.0 for such stupidity. We dont.

I shudder to imagine the carbon emissions necessary to launch Michael Moore into a ballistic trajectory.

There are no Saturn V missiles anymore. Still iffy then but there is hope in the Starship. It would be worth the carbon footprint.

I could see some sense of outrage if the rules were changed regarding who gets allocated votes, delegates etc. But the conceit that one or another candidate is more worthy of being heard than another, based on identity politics rather than on polling, is emblematic of everything that is wrong with the modern Democratic Party. The silver lining, if there is one, is that the debates themselves are silly exercises in moderators’ getting to show off, which add virtually nothing substantive to the discourse or to voters’ ability to make up their minds.

With a little luck, we are witnessing the implosion of the Democrat party.
Lizzie hates Bernie, and vice versa.
They all hate Bloomberg, and the rest are non entities.
If Bernie doesn’t get the nomination, particularly if he is successful in Iowa and N.H., the insane left wing will make the Democrat Milwaukee convention look like Chicago in 1968, thus alienating anyone with a shred of common sense from voting Dem.
Enjoy the show.
Buy ammo.

I was watching this amazing train wreck called the Dem presidential primary process, and I ran out of popcorn. During the time I was gone, the flick has become even better than before! They are looking to stab Bernie in the back for the second time…..they’ve changed the rules for a billionaire white guy and did it through an apparent quid pro quo! Now the Iowa Gold Standard Poll results were squashed (supposedly showing Bernie crushing it and Biden tanking) and everyone with a pulse, D or R, knows that THE FIX IS IN! I won’t get up again for more popcorn…

Moore is a priceless figure, inasmuch as he does serve a useful purpose in distilling all the contemptible traits of the contemporary Dhimmi-crats down to their putrid essence — narcissism, self-aggrandizement, obnoxiousness, sanctimony, incivility, self-reverence, ignorance, hypocrisy (Moore is big on this, with his totally affected and well-practiced “working-class” shtick) and an inflated sense of self-importance.

Ugly within and without; that’s what Moore is.

The DNC drastically changed its debate requirement rules to ensure the inclusion of Mike Bloomberg, mostly because he’s a billionaire.

Right before the change, he donated $325,000+ to the Democratic national committee.

Some quids are more equal than others.

WOW! From the Hill …. Gore considering race to save the party from crazy Bernie!!

First as tragedy, then as farce. Moore throwing his weight around?
Green Gore now?
The Democrats seem to be trying to be more stupid, evil, crazy, and corrupt, and they aren’t even making an effort to hide it.

Suddenly it dawns on mikey, neither he nor his opinions are important. It myst suck to be mikey.