Then the senators will have about 10 minutes for floor speeches, which will last until Wednesday afternoon. 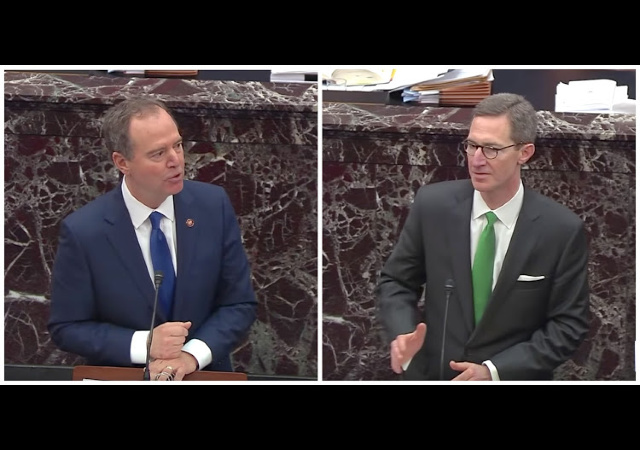 President Donald Trump’s defense team and House managers will give their closing arguments on the Senate floor for the impeachment trial.

It starts at 11 a.m. ET and will last four hours. Senators will then have an opportunity to speak on the floor on why or why not the chamber should convict Trump.

The Senate will break for lunch.

Upon return, the senators will have an opportunity to make their impeachment speeches.

Conservative Democrat Joe Manchin said he is undecided on how he will vote on Wednesday. However, he suggested the Senate censure Trump instead.

West Virginia Democratic Sen. Joe Manchin says he remains "undecided" on whether he will vote to acquit President Trump but adds, "no one, regardless of political party should think that … what (President Trump) did was right." https://t.co/NbEEwkpcmZ pic.twitter.com/SZaJZikEDw

“[The] question is not whether the president’s conduct warrants his removal from office but whether our nation is better served by his removal by the Senate now with impeachment or by the decision that voters will make in November." pic.twitter.com/2fzq3Xdm0m

The Senate has begun the floor speeches.

Sekulow played a clip of many Democrats talking of impeaching Trump since inauguration in 2017.

Jay Sekulow: the Democrat push to impeach the president started the day he took office.

Like Ken Starr, Philbin is using his time to slam the House for not giving Trump due process and therefore broke the rules.

Philbin also lashed out at the House’s excuses not to go through the courts and process. He pointed out the process should go slow.

He then responded with disgust towards Demmings’ argument about Trump acting guilty because it goes against our system of law. He said that there is nothing wrong with anyone asserting their rights and privilege. He pointed out that even the Supreme Court has basically said that train of thought is stupid.

Patrick Philbin: “This was a purely partisan political process. It was opposed bipartisanly in the House. It was done by a process that was not designed to persuade anyone.”https://t.co/TMqJHzOw0o #ImpeachmentTrial pic.twitter.com/agjL1FlZur

Purpura used his time to remind the senators that the Ukrainian government never learned about the U.S. pausing aid to the country until a Politico article on August 28.

He concluded that since no one, especially in the higher levels, knew about the pause then there was no leverage.

In fact, once someone informed Zelensky, he panicked and brought it up with Vice President Mike Pence in Warsaw on September 1. Yes, even Zelensky did not know.

Pence told Zelensky that he would like information on Zelensky’s anti-corruption reforms and how Europe could help more. In other words, Pence never mentioned investigations into the Biden family.

Deputy White House counsel Mike Purpura says “there are a number of reasons why the articles of impeachment are deficient and must fail” https://t.co/vFWavD3Hpd pic.twitter.com/RIvRty3In5

Rep. Hakeem Jeffries: “America’s national security is for sale…cannot be the massage we want to send to our Ukrainian friends or our European allies.”

“And I’m sure it is not the message that you wish to send to our adversaries.” https://t.co/lCrIAfTgkR pic.twitter.com/8nalzrRxGW

Rep. Hakeem Jeffries: “How can we know that every vote will be free from foreign interference, solicited by the president himself? You will determine whether it will be his last” https://t.co/iRtrXEthBB pic.twitter.com/KiP63vuwFe

Demmings claimed that “[I]nnocent people don’t try to hide every document and witness, especially those that could clear them” because “guilty people do” that.

I’m no lawyer, but I’m thinking that if you advise your client to talk and release all the documents you won’t be in business very long.

Also, Trump released transcripts. The left managed to twist that to fit their agenda. Why would he want to release anything else?

Rep. Val Demings: “The president’s obstruction was unlawful and unprecedented—but it also confirmed his guilt. Innocent people don’t try to hide every document and witness, especially those that could clear them. That’s what guilty people do.” https://t.co/lCrIAfTgkR pic.twitter.com/fD84NWrdGi

Rep. Val Demings on withholding of Ukraine aid: “This is enough to prove extortion in court—and it is certainly enough to prove it here.” https://t.co/lCrIAfTgkR pic.twitter.com/Pfnpl1DKCX

Riveting. Repeating everything we already heard and lying as fast as they can. One hundred senators for ten minutes each is almost 17 hours, even if they stick to time. And not a useful word will be said.

And, Pelosi and Schiff announced this morning they will seek to Impeach the Kansas City Chiefs.

You mean it’s not over? The attention whores are seeking more full days of media coverage? Holy crap they just don’t get it.

notamemberofanyorganizedpolicital in reply to casualobserver. | February 3, 2020 at 1:31 pm

No until someone flushes them.

Is Mighty Mitt ready for his closeup?

He’s got PLENTY OF TIME to perfect his speech … since he no longer has to work on his CPAC speech.

He also said Trump’s actions already call into question the legitimacy of the 2020 election.

OMFG! The democrats are so pathetic they cannot even wait until they lose the 2020 presidential elections before declaring them illegitimate. How sad is that. (Guess they’ve got to work on establishing yet another narrative as to why they lost. Even at this early date.)

I would laugh so hard if the floor vote on dismissal of the charges is held at the end of today, and all of Wednesday after the SOTU is reserved for the empty Senate chambers with CSPAN cameras and their little ten minute monologues.

So why isn’t it “foreign interference” when illegals vote?

Since they’re not Americans, they’re foreigners, by definition.

notamemberofanyorganizedpolicital in reply to TheFineReport.com. | February 3, 2020 at 1:33 pm

Yes, but we the people need to start working on electing little Trumps all through the governments – because even your city and county – let alone state – governments are all Swamps with the Fat Cats getting rich on unethical actions.

How can we ensure that the election will be fair? Demand voter ID and citizenship verification at every polling place.