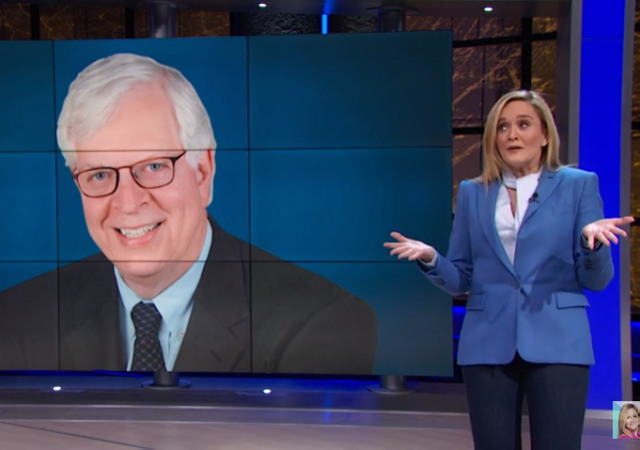 Dennis Prager and his YouTube video series known as Prager University must be scaring the hell out of the left. In January, Prager U was targeted by the New York Times. Now, Jon Stewart wannabee Samantha Bee is going after Prager U, even calling it “dangerous.”

You may remember Samantha Bee as the paragon of virtue who once called Ivanka Trump a “feckless c**t” on national television, and another time mocked a young man’s supposed “Nazi haircut” before learning he was a brain cancer patient.

Just imagine Bee’s horror over a video series that does things like defend the Pledge of Allegiance, and explains the historical reasons for the Electoral College.

Conservatives are firing back after Full Frontal comedian Samantha Bee said their ideas were “dangerous.”

“Prager U’s website says ‘Prager University is not an accredited academic institution…but it is a place where you are free to learn.’ That describes every single place! The last place Sam learned something for free was in a bra store. She learned she’s been wrong for 35 years,” Bee tweeted.

The Washington Examiner reached out to some of the most-watched personalities on PragerU, all of them saying that their goals are to counter “groupthink” and expose young people to new ideas.

“Samantha Bee’s horror that PragerU would expose students to basic historical and philosophical concepts tells you everything you need to know about the dismal state of education in our society. The sole purpose of my PragerU show the Book Club is to encourage people to read great books,” Michael Knowles, show host at the Daily Wire and co-host of The Verdict podcast with Sen. Ted Cruz, told the Washington Examiner.

Here are the tweets where Bee shared her pearls of wit and wisdom:

While Fox continues its lifelong quest to scare your grandparents into hoarding Franklin Mint coins, one growing conservative outlet is using colorful graphics and social media to appeal to a new generation. That outlet is Prager U.

Prager U’s website says “Prager University is not an accredited academic institution…but it is a place where you are free to learn.” That describes every single place! The last place Sam learned something for free was in a bra store. She learned she’s been wrong for 35 years.

Prager U is actually dangerous. They’re reaching a new, younger audience with bullshit conservative propaganda. They trick kids into thinking their videos are educational even though Prager U is as much of a real college as Monsters University.

Here’s the TV segment for anyone who cares to watch. Strong language warning:

To their credit, Prager U is capitalizing on the attention.

PragerU counterpunches after Samantha Bee’s ‘dangerous’ screed: ‘The left can no longer ignore us’

Radio host Dennis Prager and PragerU, the nonprofit he co-founded, are swinging back at “Full Frontal” host Samantha Bee’s claim that he is “dangerous” for America’s youth.

“She is right about one thing: we are dangerous to the left, and you can help us continue our impact,” PragerU responded Thursday on Facebook to a nearly seven-minute screed on the “extreme” politics of Mr. Prager. “It’s clear that the left can no longer ignore us.”

THANK YOU @FullFrontalSamB! $25,000+ raised & counting to ensure we continue to reach more young people with our “dangerous” videos.

Please consider making a tax-deductible donation in honor of Samantha Bee to help us continue our impact.

While I agree with your sentiments, please allow me to corect you on your citation.
“A little knowledge is a dangerous thing,” comes from Alexander Pope’s An Essay on Man.

Her ratings suck otherwise Prager could raise a lot more.

Speaking of ratings, lol, one of these is not like the others.

i thought comedians were supposed to be funny?

She is the joke.

If lots of people on “our side” started complaining about Leftie sites would they be in danger of being removed?

We should try to find out.

As the B-17 pilots and crew used to say, flak is heaviest when you are over the target.

At least they can’t call Prager a Nazi, but Prager’s critics are counting on their audience not being familiar with Prager. He’s one of the most even keeled, reasonable guys in the media.

Samantha Bee is the nighttime equivalent of The View; sapping Americans of their common sense hundreds of brain cells at a time.

Samantha who…? Really, what do we care what she has to say to the morons that tune in to her show looking for validation? It’s not like she’s a mainstream comic or anything of the sort. She probably will get more views from conservatives upset about her nonsense than what she actually deserves. I won’t even bother to click. Next topic…

No one should ever be afraid of jousting in the arena of ideas….that goes for lefties or righties. Even if you believe the other side is totally and completely full of crap (I.e., flat earth vs. spherical earth), you counter the “lies” with truth. It’s hard not to mock those that you believe are completely full of crap…..for those of us on the right, we should resist the urge and continue to counter with evidence. Evidence is the true sway……anyone convinced by mocking alone is probably incapable of real critical thinking of evidence.

Agreed – counter their position (cant really call it an arguement) with facts. Then mock the hell out of them.

Who is Samantha Bee? I’ve heard of her, but bless her heart, I’ve never listened to her. The day is too short to stuff your ears with lefty dog dung.

This miserable twit is as much a “comedian” as Stalin and Mao were “humanitarians.”

This is product libel. Prager U should sue Samanta Bee.

Why? She’s raising more money for them than if they *hired* her.

I remember when she was funny. Oh wait–she’s never really been funny.

I remember the days when Sammy B, and Kathy Griff RULED the airwaves with their biting wit, and incisive commentary on today’s criti…..Ok, maybe that was a dream. Or a nightmare.

This fool/tool should always be referred to as “alleged” comedian. And that is giving her a large benefit of the doubt.

I can’t stand Dennis Prager or his “university.” I’m not a Samantha Bee fan, either, but she’s right about him. The stuff he believes IS appalling. I wish she had done a better job of showing the things he’s actually pushing with his little “university.”

Can you give some examples. I’ve seen their content and it’s about as tame and milquetoast as you can get.

We are diametrically opposed on this issue.
Please provide a specific example of something he believes is awful. (You will need to provide a definition of awful.)
I stronglt suspect the following:
He does believe in the Truth.
He believes the left destroys everything it touches.
He believes leftists argue with emotions and name calling and are generally fact free.

This boob is yet another in a collection of narcissist so happy to sell out our country for a few bucks and some media attention.

This wretched narcissist is about as pathetic as they come, and about as ignorant as maxine waters.

Shun her, and shun any media having anything to do with her.

She was a witch too……

OleDirtyBarrister in reply to notamemberofanyorganizedpolicital. | February 14, 2020 at 6:58 pm

It is hard to know who she is because she cannot land a show on a major network.

And the fact that she is a very homely woman that is not funny. If a woman is that homely, she better be funny, know how to cook, and be a lady in streets while being a devil in the sheets. Otherwise, she is going to be lonely as hell.

If you’ll notice, MOST female comedians today are simply propagandists for the left and NONE of them are funny: they’re just formulamatic hacks, thrilled to sell out our country for a little attention.

Yes, know one could possible know more or be more accurate, correct, and truthful on the issues than a know-it-all, uneducated, liberal, lesbian “comic” that has never had a real job or accomplished anything in the real world.

Obviously, only people like the omnipotent and wise “comics” in the infotainment complex of Hollywood should be permitted to create and promote bullshit propaganda to a young audience. It is not like conservatives have protection of the First Amendment or anything like that.

Ironically, Samantha Bee is not even funny, which is the primary role of a “comedian”. Who would take political advice from such an unfunny clown.

Just imagine how much better off the world would be if we had a lot of dumb people who think they know everything running things!

Wait, we already have had that system for years in D.C. and we are over $22 trillion in debt.

Prager’s mistake here is treating her like a real journalist that can be argued with/against and not as the hack comic reaching for the lowest possible fruit that she is.

So she’s on one those shows I’m not missing for having cut the cord?

Another shrill angry feminist who screams obscenities at conservative targets and calls it comedy.