Iran developing “missile programs under the guise of a peaceful space program.” 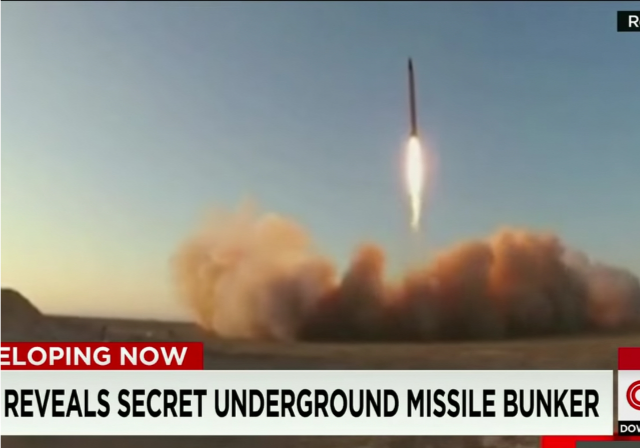 The Iranian regime is using its space program as a cover for further developing long-range missiles, the United States has warned. “The technologies used to launch satellites into orbit are virtually identical and interchangeable with those used in longer-range systems, including intercontinental ballistic missiles,” U.S. Secretary of State Mike Pompeo said last week.

The warning came after Iran failed to put a satellite into orbit. Iranians lost contact with the satellite shortly after the launch, The state TV confirmed last Sunday. The launch had been planned as part of the celebrations of the Iran’s 1979 Islamic Revolution. This is the fourth failed attempt in the series.

The failed launch, however, does not need to be seen as a setback for the regime. With every satellite launch, Tehran is getting closer to acquiring long-rage missile capabilities. “Each launch, whether failed or not, further allows Iran to gain experience using such technologies that could benefit its missile programs under the guise of a peaceful space program,” Secretary Pompeo added.

Iran’s latest failed attempt to send a satellite into orbit has rekindled U.S. accusations that Tehran is using satellite launches to develop its ballistic missiles.

The U.S. accusations have, in turn, focused attention on what Iran’s military can learn from the country’s civilian space program and whether launches of Iran’s satellite-carrying Simorgh rockets amount to ballistic-missile tests.

U.S. Secretary of State Mike Pompeo made that claim after a three-stage Simorgh rocket launched by Iran on February 9 failed to reach the speed necessary to lift its payload — a Zafar communications and mapping satellite — into a low orbit around the Earth.

“The technologies used to launch satellites into orbit are virtually identical and interchangeable with those used in longer-range systems, including intercontinental ballistic missiles,” Pompeo said in a statement on February 11.

“Each launch, whether failed or not, further allows Iran to gain experience using such technologies that could benefit its missile programs under the guise of a peaceful space program,” Pompeo said.

U.S. President Donald Trump’s administration cited concerns about Iranian missile tests to justify its withdrawal in 2018 from the Iran nuclear deal and the reimposition of crippling economic sanctions against Tehran.

President Donald Trump withdrew the U.S. from the 2015 nuclear deal about two years ago, calling it the ‘worst deal ever.’ The 2015 Obama-Kerry deal allowed Iran to keep enriching uranium, the key ingredient in any nuclear arsenal. The pact did not stop the regime from advancing its balletic missile systems, essential for carrying nuclear warheads.

The promised safeguards under the Obama-era deal failed to check either Iran’s growing nuclear capabilities nor its advancing missile program. President Barack Obama’s much-feted ‘snap-back’ sanctions never kicked in, despite one Iranian breach after another.

The regime is not developing the WMD capabilities all on its own. It has been busy trying to buy and steal nuclear technologies from the West. According to the German domestic spy agency (BfV), since 2015 Iranian actors made hundreds of attempts to get hold of dual-use nuclear and WMD technologies from German companies, the 2019 annual intelligence report said. There was a “clear rise in evidence” that Iran was advancing its illegal nuclear and WMD programs, the German report said. North Korea is also helping Iran ramp up its balletic missile and nuclear programs, intelligence evidence suggests.

Pulling out of the flawed deal in May 2018 paved the way for President Trump to roll out the strategy of ‘maximum pressure’ against the regime, placing stiff sanctions on country’s state-run oil, banking and shipping sectors. The sanctions had a crippling effect of the regime, shrinking the national economy to about 10 percent in 2019. Iran’s Islamic Revolutionary Guard Corps (IRGC), regime’s military arm, which holds key stake in country’s oil and gas sectors was hit disproportionately by the sanctions, limiting its ability to arm and fund jihadi groups across the Middle East.

The sanctions also reignited popular discontent against the regime, with anti-regime protests erupting in major cities, including the Iranian capital Tehran last November. The uprising was only quelled by an IRGC-led bloody crackdown which killed more than a thousand Iranians.

Obama did for Iran what Clinton did for the NOR Kons.

Well this is the biggest “DUH!” in the world. This is what every Missile Program in every country that’s ever had them has been about, even ours in the beginning.

notamemberofanyorganizedpolicital in reply to MrE. | February 17, 2020 at 2:53 pm

Senator Tom Cotton On Communist China’s Lies about their virus and all………….

I raise with a Doh.

Thanks to Jugears, Biden, Kerry and Crooked Hillary! PDT should wipe out Iran’s missile infrastucture this afternoon!

I repeat, that we should destroy their hydroelectric dams, followed by all water resivors. Then destroy all their high tension grid.

Take these things out bit by bit, in response to each and every belligerent act.

Make it impossible for Iran to continue pursuing nukes, missiles, and any other terrorism acts.

I am shocked – SHOCKED, I tell you – to find that weaponization going on here!

“The technologies used to launch satellites into orbit are virtually identical and interchangeable with those used in longer-range systems, including intercontinental ballistic missiles,”

So why has no Clinton been hanged for gifting that tech to China?

And in other news, water has been found to be wet, shocking only the MSM.

I don’t think I need Pompeo to point out the obvious….of course the Democrats might.

Let them, encourage this. For anything but first world it’s a money time and tech sink. Who knows maybe the horse will learn to sing