“Jones’s electoral prognosis was grim even before he announced today he will indeed vote to convict and remove President Trump in the Senate impeachment trial.” 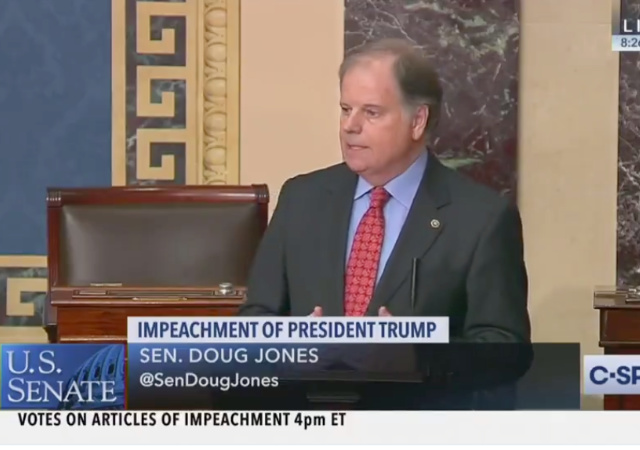 Senator Doug Jones (D-AL) was already facing reelection challenges for next fall, but things just got a lot harder for him. As a Democrat, Jones lucked into this job in Trump country. He might not have it for much longer.

The Cook Political Report has now shifted the race to lean Republican.

Alabama Senate Moves From Toss Up to Lean Republican

Alabama Democratic Senator Doug Jones was always going to be the most endangered incumbent in 2020. He narrowly won a 2017 special election over Roy Moore, the deeply flawed and controversial GOP nominee, and has had a target on his back ever since. But the perfect storm that helped Jones become the first Democratic senator Alabama had elected in a quarter-century won’t be replicated this November.

Yes, Moore — who faced allegations of sexual misconduct toward teenage girls from decades earlier that surfaced during the race — is running again. But the former Alabama Supreme Court chief justice is now persona non grata within Republican circles after losing and has virtually no chance of winning the nomination. The March 3 primary looks to be coming down to former Attorney General Jeff Sessions, whose vacancy of this seat led to Jones’s victory in the first place, with former Auburn football coach Tommy Tuberville and Rep. Bradley Byrne fighting for a slot in the runoff. We’ll have more analysis on that primary in next week’s newsletter.

Jones’s electoral prognosis was grim even before he announced today he will indeed vote to convict and remove President Trump in the Senate impeachment trial. That’s not a winning vote to take in a state Trump carried by 28 points four years ago, will easily win again this year and remains incredibly popular in. Our analysis that this race is moving away from Jones, no matter what he does, solely on the fundamentals would have been the same had he voted to acquit Trump.

Retaking this seat will make it easier for Republicans to retain control of the Senate, so this is great news. There are some vulnerable races, after all.

Bridget Bowman of Roll Call seems to agree with the Cook Political Report in suggesting that Jones was in trouble no matter what he did about impeachment:

Long before the impeachment process began, Sen. Doug Jones was considered the most vulnerable senator in 2020. The Alabama Democrat’s vote Wednesday to remove President Donald Trump from office doesn’t change that.

Jones, a former prosecutor, said that after “many sleepless nights,” he concluded that Trump abused his power by pressuring the Ukrainian president to investigate Democrats, including former Vice President Joe Biden, and that Trump obstructed Congress’ investigations of those allegations. The Senate later voted Wednesday to acquit Trump on both impeachment charges.

Operatives in both parties said Jones’ decision does not fundamentally alter the headwinds he faces in 2020 as a Democrat running for reelection in a state Trump carried by 28 points in 2016.

Multiple Republicans are vying for the position, including Jeff Sessions, who held the office before joining the Trump administration.

Jeff Sessions appears to have the inside lane to claim the GOP nomination for his old Senate seat in Alabama, but the other Republicans in the race are ramping up their efforts with less than a month to go before the vote.

Republican Rep. Bradley Byrne announced he’s got $2 million, while political newcomer Tommy Tuberville released an ad showing him from his days as a football coach at Auburn University, yelling at a referee so vociferously that an assistant had to restrain him.

He calls himself “a politician’s worst nightmare,” and vows to be a loyal foot soldier for President Trump.

The GOP must hold the Senate in 2020. Not a single race can be taken for granted.

At least we can be sure Romney won’t be a candidate.

Jones committed political suicide. Another Republican in the Senate will help neuter the likes of RINO Romney.

notamemberofanyorganizedpolicital in reply to Dusty Pitts. | February 6, 2020 at 3:07 pm

I am not so sure of that considering it is
“Miss Mittens Derelict.”

Until Democrats admit it was a rushed and invalid impeachment, all bets are off on Republicans making huge gains against them.

Racism has its roots in the denial of the truth and the persecution of the innocent.

Imagine a political ad this fall that says substitute being Republican for being a black before 1964 and think about how that applies to the way the Democrats are acting today.

Such an ad would receive media scorchery and the point would get lost…promise me you won’t ever run ads.

And exactly how would that change the current media’s narrative.

Promise me you will think about it before responding.

Until Democrats admit it was a rushed and invalid impeachment, all bets are off on Republicans making huge gains against them.

Republican energy and independents’ sympathies will decide this year’s elections. What Peloshmer say about impeachment won’t affect that either way.

Tubberville will probably never be a good candidate just for the sake of some crazy spiteful football fans that won’t vote for him because ‘Bama.

Yes, there are quite a few that are THAT crazy.

Tubberville is an idiot and is manifestly unqualified, he has never had a real world job preparing him for the Senate.

Anyone who voted for tht sham impeachment sold out our country and wreaked havoc on our heritage.

Jones is one of the snakes who did.

notamemberofanyorganizedpolicital in reply to TheFineReport.com. | February 6, 2020 at 3:09 pm

We need to know how much in Ukrainian BRIBES they got then.

The fact that before this Cook had it as a tossup tells you everything you need to know about the Cook report.

One thing for sure this time in AL is that the candidates will be thoroughly vetted. As to the Bama fans not voting for Tuberville, that’s absurd. When either Auburn or Bama are not playing each other the fans root for their in-state rival. The battle will be the sniveling Sessions or an old football coach of a beloved state school. I believe Tuberville will win. Jones will be trounced and that is why he voted the way he did. He’s looking for some job in DC with the DNC. War Eagle!

LI likes to take The Cook report as some kind of serious polling operation instead of the hack Democrat operation it really is.

If you EVER had Alabama as a “toss-up” in a Presidential year with the previous incumbent Jeff Sessions running for his old seat you aren’t to be taken seriously.

Let’s remember that when we start watching predictions from the Cook Report about Trump losing in 2020.

notamemberofanyorganizedpolicital in reply to Conan. | February 6, 2020 at 3:10 pm

Anyone involved in this coup attenpt should pay, not just at the ballot box, but with their freedom.

Jones will be toast burned to a crisp!

In the year following the allegations, no criminal charges were issued against Moore and the issue lost the public spotlight.

I watched the vote and it was sickening, stomach-turning to see DemocRats proudly shout, “Guilty,” when they know it’s all a lie. Disgusting people, unworthy of the Senate, unworthy to call themselves Americans. We will crush them in November, as they should be crushed. Cockroaches, all of them.

I wonder what cushy post-senate sinecure Jones was promised?

Any Member of Congress or top administration official that keeps the faith with the Swamp can count on a lucrative (six-figure) job when they leave government employment, even if they spend some time in prison first.