Abrams, who has had made a career out of alleging the 2018 Georgia gubernatorial race was stolen for her, now says Democrats must “start planning our systems for future elections.” 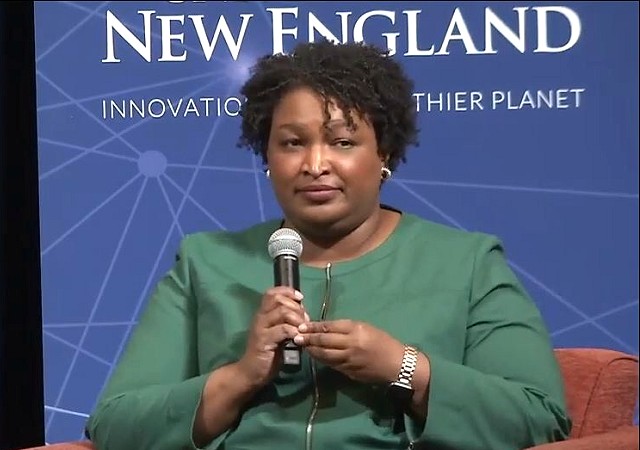 Democrat Stacey Abrams, who has spent the last year and two months telling crowds of Democratic supporters and journalists (but I repeat myself) that the 2018 Georgia gubernatorial election was stolen from her, is now telling Democrats they must move on from past elections.

The failed 2018 nominee in the Georgia governor’s race sat down for an interview at the University of New England Wednesday to talk about the voting rights work she says she’s been doing in the aftermath of that election and what her political plans are going forward.

Two of the things she was asked about towards the end of the interview was to confirm she was interested in running for vice president, and to give her thoughts on the Democrats who were running for president. Abrams’ answers to those two questions just showed her once again to be a walking contradiction. Here’s what she said (transcribed):

“I did not run for president, in part, because I believe that my best value add is the work I’m doing on Fair Fight and Fair Count. I think [the] structural piece is important. I also didn’t run because I think we have an extraordinary crop of folks who are running. I think we have unfortunately lost opportunities to have a full, engaged field in part because the structure of the system was designed to respond to the 2016 election. As well-intentioned as it may be, the reality is we have to stop re-litigating past elections and actually start planning our systems for future elections.”

After noting why she decided against running for Senate (“you need to want to do the same thing for 6 years, 12 years, 18 years. I don’t want to”), Abrams told the crowd she “preferred the executive branch because you have the most direct contact with change and you have the ability to architect the change you want to see.”

She went on to confirm she was interested in the job of vice president. “And if the person who becomes the nominee for the Democratic candidacy for president says they want me to help, I am all in,” she said.

Watch Abrams speak on these issues below:

So Abrams doesn’t want a Senate job because that would require at least 6 years of doing the same thing, but she would be ok with at least 4 years (possibly 8) of doing the same thing by way of playing second fiddle to the person is running the country? That makes no sense, especially when you consider last March the idea of being second in charge in the White House seemed to offend Abrams.

Furthermore, as Joe Biden himself would probably tell her, the vice presidency is not a position designed for social justice warriors who want to implement “structural change.” The vice president’s role is to promote and amplify the president’s agenda and little more beyond that.

And assuming for purposes of discussion that Joe Biden wins the nomination, picks her as his running mate, and then wins the presidency, he is not an Elizabeth Warren type who is going to be on board with making radical changes to the way things are currently done.

In other words, Abrams would not be able to be the activist vice president she wants to be in a Biden administration.

As far as urging Democrats to move beyond past elections goes, the Georgia GOP was quick to point out how she had an odd way of doing that:

This is absolutely disgusting.

Stacey Abrams has done NOTHING but manufacture excuses and false narratives for losing Georgia in 2018.

But beyond all that, let’s just sit back and marvel for a moment at the woman who has made a career out of telling people the Georgia governor’s race was rigged against her now telling people it’s time for Democrats to stop re-litigating past elections.

She’s been very successful at selling her message for a number of reasons, one of them being that not a single mainstream media outlet will call her out on it. “Official” fact-checkers have, in fact, shown reluctance to examine her claims critically.

On the other hand, Abrams has been fact-checked multiple times by conservatives on her repeated claims about the election being “stolen.” If you read them, you’ll see that really nothing she has said about the Georgia election and Brian Kemp is correct.

In spite of the facts not being on her side, however, Democrats like current candidates Biden and Elizabeth Warren, failed 2016 presidential nominee Hillary Clinton, failed 2020 presidential candidate Beto O’Rourke, and others have participated in a delusional coddling of Abrams and her erroneous statements.

It’s an understatement to liken Abrams to royalty in Democratic circles in and outside of Georgia because of what she’s done. Candidates at the local, state, and national level all make it a point to kiss the Abrams ring in hopes of obtaining an endorsement from her.

All this because she refuses to concede the 2018 election, because of her continued insistence that she was a victim of a racist and rigged system in Georgia, her repeated undermining of the electoral process nationwide, and because she ticks all the boxes for “woke” Democrats who want to look like they’re attuned to minority voices.

As Imaginary Governor of Georgia, Stacey Abrams will direct her imaginary staff to stop re-litigating past elections.

An outstanding work of satire with this headline. https://t.co/9M4VVlzfk1 #gapol

This is an incredible quote from someone who has spent over a year claiming an election was “stolen” from her as she gaslighted the public into believing unsubstantiated conspiracy theories that denigrated the will of Georgia voters. @staceyabrams is beyond parody. #gapol https://t.co/p2xac7NaRJ

“is now telling Democrats they must move on from past elections.”

Right, they must prepare themselves for future loss, and work hard to find ways to try and blame others for their deficiencies.

Biden in his best Moe Bandy voice…..Roll on big momma………

Everytime LI puts pictures of Stacy Abrams up, I cringe. Not just over her hideous appearance, more like everything she represents.

Yuck. Just yuck. A morbidly obese person is incapable of leadership, in my opinion.

And get those teeth fixed.

JFK had his missile gap. She has an incisor gap.

Well, at least she’s not flashing a Lizzo gap. For that we can be thankful.

Who is this tub of lard, anyway?

On second thought… Good thing she’s changing her strategy 3 years and 2-1/2 months after the last election, and 9-1/2 months before the next one!

So the fat lady sings.

She is an example of the what I would call the “New Political Entitlement”, even if they loose the election they are still entitled to the office because of their race/gender or whatever.

Has that ugly hag paid off her $40k debt yet? And if so , how much was from supporters rather than her actually getting a real job and not some political speech under the table bribe payoff?

Every time white democrat politicians kiss up to Abrams I picture in my mind R. Crumb’s Anglefood McSpade who, unknowningly to herself, is actually being used and abused by men she believes to be her friends.

Stacey Abrams: That thoroughly unpleasant, overweight woman you know at work who always complains about the buffet at office parties and constantly whines about not getting promoted.

a poster child for AA–loud, obnoxious, ignorant with delusions of entitlement–a perfect mouthpiece for the leftist/fascist dems–why else give this proven loser a platform than to advance the fascist narrative?

When did Prop Joe start wearing a dress?

If Biden or Sanders wins, the job of the VP is to wait until the President drops dead. She’s OK with doing that for a while!

Requires her to outlive them. I wish her all the best.

If she wants to do her party & the country a favor, she should retire from public life. What an embarrassment, even by mediocre, dumbed down Democrat standards.

Stacy Abrams said WHAT?! Uh-oh… that’s the end of her!

Have a Coke and a smile, Stacy. And some Twinkies.