Collins hopes to have Trump’s support. 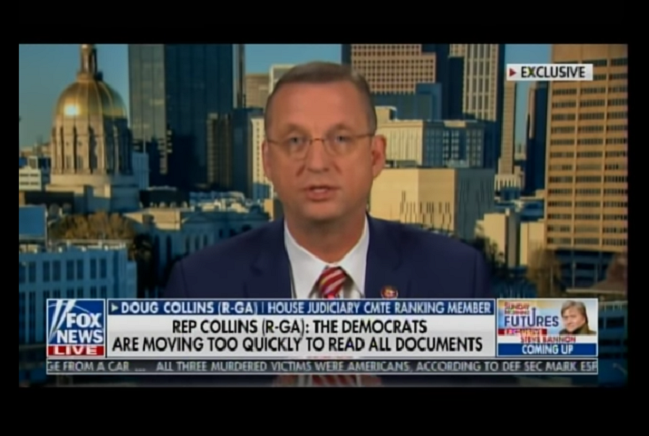 As if 2020 isn’t already exciting. Georgia Republican Rep. Doug Collins confirmed on Fox & Friends this morning he will challenge incumbent Sen. Kelly Loeffler for her seat.

Loeffler took over the seat after Sen. Jonny Isakson retired. She was sworn in on January 6.

For months, I have given serious deliberation to the role I should serve that would best benefit GA, the country and @realDonaldTrump. Today, I have officially launched my campaign for Senate to do just that. I invite you to join our campaign here:https://t.co/xubaYUr5RP

Since it’s a special election there will be no primary. This has caused concerns among Republicans because some believe “the GOP division heightens the possibility that a unifying Democratic candidate can win the race outright.”

The news did not thrill people since the Republicans have a minority in the House and a slim majority in the Senate.

From the National Republican Senatorial Committee and Senate Leadership Fund:

Kelly Loeffler was the choice of the establishment over a prominent congressman who has openly supported Trump. At a critical time in our country, where a Democrat control of the Senate will be the end of good judges, the establishment has to play games. You can take the party out of the swamp, but you can’t take the swamp out of the party.
Having vented, if the polling is pointing toward a Democrat victory, Doug Collins should withdraw.

Sorry not willing to play the GOPe game where they pick some GOPe in the Deep South and say Suck it forever we can’t change the incumbant.

Tired of McConnell’s game where they force GOPe candidates in Deep Red States where they know they could get a Conservative Senator.

You don’t sse the Democrats going Moderate in Deep Blue States like CA do you?

Your headline is a bit confusing. Doug Collins has been a stalwart defender of President Trump for years. Kelly Loeffler is thoroughly establishment, having supported Mitt Romney and some democrat house candidates.

She just called out romney over his support of extra witnesses.

After 2 weeks, it’s clear that Democrats have no case for impeachment. Sadly, my colleague @SenatorRomney wants to appease the left by calling witnesses who will slander the @realDonaldTrump during their 15 minutes of fame. The circus is over. It’s time to move on! #gapol
— Senator Kelly Loeffler (@SenatorLoeffler) January 27, 2020

Stalwart, yes. But, effective? Collins has been far less effective than I’d expect from a minister/lawyer with military experience. That said, I’ll take a stalwart American conservative with moderate verbal skills over any member of the GOPe.

Gov Kemp could have avoided this by not selecting Loffler. Or simply making the race partisan so there would have been a primary.

I have no problem with a hot supporter of the President running against a lukewarm Republican. I wish someone would do this to Piere Delecto.

Sen. Kelly Loeffler is running ads very pro President Trump. She has been very vocal supporting the President during impeachment

How smart do you have to be to be against singing on to the Democrat debacle?

Why can not signing onto this disaster made you want to trust her bonifides?

In the end Collins might vote to accquit. What level do you have to be at to say you support not impeaching Trump? Let’s consider Manchin is thinking of voting No when answering that question.

The way the national and state apparatus comes out so quickly in opposition in such a critical way tells me all I need to know. The monied donors have their favorite in Loeffler. And they’ve already started to attack Collins to keep it that way.

I couldn’t care less if she’s donated to or supported Democrats. But ties to the fat-cat-donor-class is what has screwed up the GOP for at least a couple of generations.

I’m interested in how the prospects look for his House seat remaining Republican. I don’t have a problem with a solid pro-Trump congressman running against a RINO senator. It’s not like 10-15 defeating 10-15 RINOs in the senate is a major blow to the House when it is looking like Trump will flip many more than that in Dem seats.

Plus, she looks vulnerable. I just don’t believe there are 10-15 RINOS vulnerable and would not like to see House seats abandoned for lost causes.

He’s in a solid red district; there’s little chance of a Dem pickup there.

My own rep is retiring and was rumored to be thinking of challenging Loeffler but even though he’s a Republican, I’ll vote Collins … as much to support him as to tell Kemp fuck you.

As I have sat here regretting my vote for Mitt Romney {and John McCain}, Sen. Loeffler seems vaguely familiar…a rock ribbed conservative, the heir to Ronald Reagan, who once elected to a full term will join the Washington Establishment until the next election cycle when she will suddenly start driving an old battered pickup truck and be seen with a straw in her mouth on the front porch of her farm house. Watch to see where her out of state donation comes from. I know where $100.00 of Doug Collins money is going to come from-my pocket.

It starts with the fact that Brian Kemp is a moron and makes really bad appointments. His judicial, DA replacements, and other appointments have been eye rollers to me. Then he appointed a transplanted yankee carpetbagger like Loeffler thinking he could earn votes of nomadic, transplanted women in the suburbs. But in the process he alienated everyone else in the state.

The distinction of Georgia being two states compounds the issue. Atlanta has grown too big and is overrun with transplants that make up a revolving door culture of people that stay a few years and then move on. The composition of those people in the suburbs has gotten worse because they bring their stupid northern liberal ideology with them.

The additional complicating factor is that the nominally Republican women in the burbs did not and do not like Trump. The don’t particularly like Kemp either, he ran a whacky campaign based on the notion that voters were in a strange place and were very anti-establishment.

ODB, I agree wholeheartedly with most of your rant, however…..those nominally Republican women have been turning out in great numbers for rallys for our President and last night in Suburban Houston they turned out to vote for Gary Gates in a special Texas House district race against a Progressive, a doctor, a female, touted by Warren, Biden, Castro and Beto, and who’s expected victory was going to show the path for Democrats to retake the Texas state house. She lost by 17 points….many of those votes cast by Nominally Republican Women in the ‘burbs. N.R.W.i.t.B’s. rock…They are just as fed up as the rest of us.

Your information is not pertinent to Georgia. Those nominally Repub women in suburbs here are mostly yankee transplants and did not vote in the general for POTUS or voted for Hillary. The polling clearly shows they do not like Trump as did the votes actually cast.

I lived in Atlanta north suburbs from 1982 until 2015. I am somewhat familiar with them. The polling may have shown that they did not like Trump in 2016, 2018 {Polling also showed Hillary winning and that Stacey Abrams was neck and neck with Kemp} but in 2020 they have grown to like WINNING!, Their 401k’s are flush, the price of oil is down, the world is peaceful, unemployment in all areas at record lows. The thing they do not like in 2020 is Democratic obstruction and the Media. Trump has shown us that someone who fights will be supported by suburban women in Atlanta and Houston and other metro areas.

Don’t forget Kemp ran on getting rid of illegal aliens and since he has taken office, hasn’t done ONE DAMN THING to honor that promise.

He lied to get elected. He never meant it.

Don’t forget his appointment of a latin to the insurance commissioner position — WHO HAD NO INSURANCE INDUSTRY EXPERIENCE.

Now?
I get it but he expects Trump to support him and piss off a Senator voting on witnesses and impeachment. Couldn’t he wait until impeachment is over?

Do you seriously think a Senator in Georgia can vote against Trump and not END their career in an upcoming election WITH a primary challenger?

I think a Senator whose opponent is endorsed by Trump is not counting on many votes from Trump supporters. In other words their career is over anyway, so why not take Trump with them?

I know the reasons Kemp cited in choosing to appoint Loeffler but while plausible GA is still red for the moment and I would have preferred Doug Collins.

My personal view is that the party and party officials should stay out of any primary fight and let the local party members decide without interference. With this special election not having a primary complicates matters.

I would hope that if after a month of campaigning whichever R is behind in the polls would step aside and then unite the party behind that candidate.

McConnell gets involved in primary fights whenever there’s a challenge to the establishment. And his comments on it have been sickening eye-openers.

If he’s a Tea Party candidate, he’s toast. McConnell will fry him with his morning bacon. And of course, Roy Moore in Alabama.

Because nothing at all has changed since 2016.

Thanks for the reminder of why I’ve cut way back on reading comment threads.

I don’t care who wins the primary, but they’d damned well better coalesce around the primary winner to get a republican winner in the general election.

THere is no primary.

Glad to see this. I’ll vote for Collins.

There’s no primary—just a special election, which means if the Republican vote is split, a Democrat is elected. If this turns into another Roy Moore moment, and the Dems pick up a Senate seat, it’ll be on the heads of all those purists who think that only their own version of a perfect result is good enough. If you think the current impeachment circus is destroying this country’s institutions, wait until you see what comes out of Washington with both the Senate and the House under Democratic Party control.

(BTW, there’s absolutely no certainty that Trump will be re-elected. Picture a scenario with a “progressive” president, and his party controlling both houses of Congress. Think that’s impossible? It’s only the mirror image of what the Dems were ‘sure of’ in 2016!)