Pelosi Holding Onto Articles of Impeachment Despite Pressure from Senate Democrats

Pelosi Holding Onto Articles of Impeachment Despite Pressure from Senate Democrats

Pelosi stuck to her demands of needing to know “the arena in which we are sending our managers.” 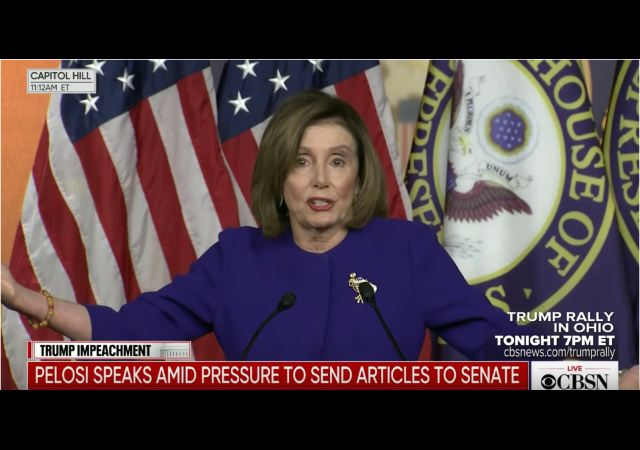 Speaker of the House Nancy Pelosi said she will hold onto the articles of impeachment despite Senate Democrats pressuring her to hand them to the chamber:

“No, I’m not holding them indefinitely,” Pelosi told reporters during a press conference at the Capitol. “I will turn them over when I’m ready, and that will probably be soon.”

Pelosi stuck to her demands of needing to know “the arena in which we are sending our managers.” She asked if that’s “too much to ask.”

House Armed Services Chairman Adam Smith (D-CA) told CNN this morning that Pelosi should give the senate the articles of impeachment.

Smith walked back his statement, saying he “misspoke” before repeating Pelosi’s talking points.

I wonder who got to him because Dana Bash claimed another House Democrat told her that others feel the same way. No one comes out against Pelosi because she “never forgets.”

Senate Majority Leader Mitch McConnell has stuck to his guns when it comes to the trial. He has repeatedly said that Pelosi will not dictate what happens in the Senate.

The constitution says the arena for a trial is the Senate, not the House. That is all you need to know.

She’s actually been in the Senate’s own forum countless times; so she knows the “forum” where the trial will be held. Not when the Senate’s in session (I think Senate rules only allow Senators and ministerial personnel access to the floor at those times).

Actually I’m rooting that she delays, delays, and delays until the new Congress is seated on 01/04/21 (Jan 3rd is a Sunday), at which time the new House votes to vacate, dismiss, dissolve, extinguish [add your own terms] the Articles.

What an idiot. She has NO ROLE to play in the Senate. Right now, this is all just stupid Dem street theater.

Pelosi seems to believe of late that her Constitutional role is as Empress, with authority over both houses of Congress and the entire Executive branch, including the office of POTUS.

She’s delusional. And dangerous to our continued existence as a nation.

Sorry for the downvote, Granny! Not intentional at all.

She may not but her managers do have a role to play in the senate.

Gone are the days of Scoop and Maggie.

Good days they were, too.

She’s just playing it out, hoping for a break.

I haven’t forgotten either the Kavanaugh circus or the Schiff circus. This is just more of the same.

MSM now has gone quiet on this. Don’t know what to say because the Democrat talking points on the subject are not being issued right now. Go to Shareblue. It hardly addresses the subject.

Holding the Articles is less harmful than sending them over. A pending failure is better than a documented failure. She will hold ’em. The only question is when or how does the clock run out.

That’s her big problem now – what’s her end game? She thought she could bluff McConnell into doing something, but he just called that bluff. So how does she get out of the ridiculous position she’s put herself into?

actually I think she can hold out till November, when the democrats might just might take the senate and the democratic control senate can continue on with the impeachment

Is she prepping another ‘Whistle Blower’?

What she’s doing is called ‘abuse of power’.

She is holding them for the simple reason that they are a means to an end, and not the end in itself. She wants the Mueller investigation 6E material

Oh.
In fact, according to Breitbart Rep. Bradley Byrne (R-AL) will introduce a resolution on Thursday to censure House Speaker Nancy Pelosi (D-CA) for obstructing the impeachment proceedings against President Donald Trump.

Cynical (or is that “experienced”?) me suspects Nancy’s waiting on her senate minions, RINOs included, to provide her with assurance of the vote in advance? “Can we count on Mittens, Murk, Collins, Manchin, to vote to convict?”

Likely she’s just trying to save face since the coup has failed. What I wonder is if she’s holding out for a tie in the senate, or going for a simple-majority conviction? They’ll never get a vote to remove, unless the coup runs deeper than anyone has let on.

Again the cynic – but the way the House Dems, Nancy in particular, muscle one another and with some of the announcements of retirement coming out of House GOP members (see: https://www.washingtonpost.com/graphics/politics/congress-retirements/ ) I wonder about the leverage games being played and how much blackmail is behind the votes and retirement? And if that’s what’s happening in the House, are there similar goings on in the Senate?

Mitch has an infinite array of options.

he could simply state the trial starts on x date, with or without the house.

Pelosi only has power in this circumstance to the degree that the senate tolerates her actions.

James Bond: Do you mind if my friend sits this one out? She’s just dead.

We’ve gone from “Orange man bad and a danger to the world” to “I’m not sending over the articles until you agree to give me power over the process that the Constitution doesn’t give me”.

Good. Sen. Josh Hawley (R-MO) has a resolution pending which has much GOP support giving Pelosi until 12 Jan to send over the articles of impeachment. If not they will be summarily dismissed for lack of prosecution.

I think even Murkowski and Collins can see this pathetic farce for what it is. I have no such hope for Mitt “Pierre Defecto” Romney (R-Vichy France).

This whole fraud could be over on Monday.

There are actual real democrat constuitants who believed their democrat representative was voting for real articles of impeachment. Those constuitants got played. The democrat party is like an abusive spouse: “Sorry about that black eye babe, but you made me do it.” The sad part is, those democrats will say “I know, I’m sorry I made you so mad.”

She’ll submit them to the Senate in late October.

She should consult Kenny Rogers.

Smart. To paraphrase Twain: It’s better to keep your mouth closed and let people think you are a moron, than to open it and remove all doubt.

I really don’t understand why this is being allowed to continue. This was settled in 1993 by Chief Justice Rehnquist in Walter Nixon vs United States. He ruled that the Constitution gives the House has “sole authority” to impeach and the Senate the “sole authority” to try ANY impeachment. Neither has any control over the other in the process and he also ruled that the SCOTUS has no Constitutional authority to intervene.
For the first time in my life, Democrats are actually being transparent in their behavior. This is about affecting the election in November and doing their level best to try to “damage” a candidate that their own candidates have no chance of beating.