Sen. Dianne Feinstein (D-CA): “If we’re going to do it, she should send them over. I don’t see what good delay does.” 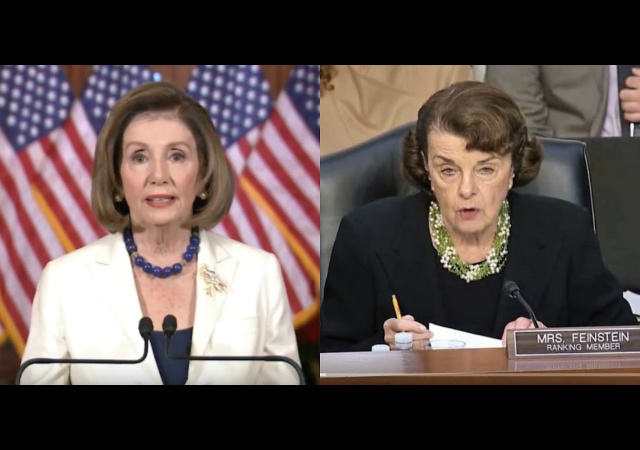 Some Senate Democrats have grown tired of Speaker of the House Nancy Pelosi’s games when it comes to President Donald Trump’s impeachment.

Now those senators have publicly demanded Pelosi to send the upper chamber the articles of impeachment.

Pelosi has tried to dictate how the Senate will run its impeachment trial. Until she knows the terms she has held onto the articles of impeachment.

The Senate Democrats have shown they want to get the trial going as soon as possible. Here are a few statements.

Sen. Dianne Feinstein (D-CA): “If we’re going to do it, she should send them over. I don’t see what good delay does.”

Sen. Joe Manchin (D-WV): “Now that we have John Bolton saying he wants to testify, she’s accomplished something.”

Sen. Richard Blumenthal (D-CT): “We are reaching a point where the articles of impeachment should be sent.”

Sen. Chris Murphy (D-CT): “I think the time has past. She should send the articles over.

Senate Majority Leader Mitch McConnell (R-KY) has not minced words since the House voted for the articles of impeachment. He continues to remind Pelosi she does not control the Senate:

“There will be no haggling with the House over Senate procedure,” McConnell said. “We will not cede our authority to try this impeachment. The House Democrats’ turn is over. The Senate has made its decision.”

McConnell said that explanation for withholding the articles was that “Pelosi wanted leverage — leverage to reach into the Senate and dictate our trial proceedings to us.”

“Now I’ve made clear from the beginning that no such leverage exists,” McConnell said. “And yesterday we made it clear it will never exist.”

McConnell also urged Senate Minority Leader Chuck Schumer (D-NY) to listen to his colleagues. However, Schumer continues to side with Pelosi:

“Republicans can only get behind kicking cans down the road. Because they know we have the full weight of the argument on our side. There’s virtually no argument that we should not have witnesses, that we should not have documents,” said Senate Minority Leader Chuck Schumer (D-N.Y.), responding to McConnell on the Senate floor. “The American people do not want a cover-up.”

Schumer keeps droning on and on about witnesses, but McConnell says he has the votes to begin the impeachment trial even without an agreement on witnesses:

“We have the votes,” McConnell told reporters.

The vote would kick off “phase one” of President Trump’s impeachment trial, while the contentious issue of witnesses would come up after the trial is underway, McConnell said.

“Fifty-one senators determine what we do and there will be, I’m sure, intense discussion, once we get past phase one, about the whole witness issue,” McConnell said.

There goes another blue wall.

Nancy Pelosi and Dianne Feinstein have an average age of 83. Clairol’s gross revenue will drop significantly once those two have kicked the bucket.

“Nancy Pelosi and Dianne Feinstein have an average age I.Q. of 83.”

Fixt it for ya.

“Nancy Pelosi and Dianne Feinstein have an total average age I.Q. of 83.”

Fixt it for ya.

Feinstein being from the same poopy and smelly neck of the SF woods that Pelosi calls home makes it a certainty that this is not playing well in CA.

Feinstein has been compromised by the Chi Comms, either by blackmail or bribery – or both.

Nancy’s delay is beginning to smell like the streets in her District. And that ain’t good! Time to get off the pot and get moving Nancy.

Since they are fake articles, the Senate can have a fake vote on whether they want to have a fake trial. This has been the biggest political miscalculation in US history. That’s what she gets for listening to the bartender and her gang.

D’s are losers all the way around.

China called in her orders.

Looks like several Senate Donks have seen the writing on the wall: they know Trump is as good as acquitted and they just want to get it over with. They’re well aware that if McConnell stretches out a trial it’ll hobble five Democrat presidential candidates for potentially weeks during the all important primary season. May it come to pass!

Article of impeachment are so like 2019. In fact, I’m not even sure they really happened. I think this may just be more fake news from the Trump controlled media.

Will Pelosi be charged with Obstruction of Congress by not passing the charges to the Senate? Why not?