Democratic Rep. Adam Smith Tells Pelosi: ‘It is Time to Send the Impeachment to the Senate’ (Update – “I misspoke”)

Democratic Rep. Adam Smith Tells Pelosi: ‘It is Time to Send the Impeachment to the Senate’ (Update – “I misspoke”) 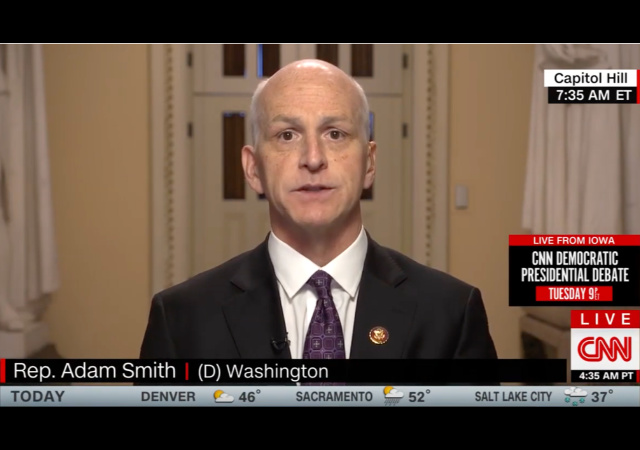 “I understand what the speaker is trying to do, basically trying to use the leverage of that to work with Democratic and Republican senators to try to get a reasonable trial, a trial that would actually show evidence, bring out witnesses,” Smith told CNN. “But at the end of the day, just like we control it in the House, [Senate Majority Leader] Mitch McConnell controls it in the Senate.”

“I think it was perfectly advisable for the speaker to try to leverage that to get a better deal,” he continued. “At this point, it doesn’t look like that is going to happen. And yes, I think it is time to send the impeachment to the Senate and let Mitch McConnell be responsible for the fairness of the trial. He ultimately is.”

Apparently Smith is not the only one. Dana Bash said on the show she received “a text from a House Democrat who explained why they’re not saying it publicly…’because she, Nancy Pelosi, never forgets.'”

Pelosi has withheld the articles of impeachment until she knows all the details of the impeachment trial.

Senate Majority Leader Mitch McConnell has said since the House passed the articles that Pelosi will not dictate what happens in the Senate.

Senate Minority Leader Chuck Schumer has carried Pelosi’s water in the senate. Despite this, powerful Senate Democrats broke away from Pelosi and Schumer on Wednesday.

Looks like Nancy had a talk with him. Nice political career you have there, Adam, shame if something happened to it.

I misspoke this morning, I do believe we should do everything we can to force the Senate to have a fair trial. If the Speaker believes that holding on to the articles for a longer time will help force a fair trial in the Senate, then I wholeheartedly support that decision.

I am concerned that Senator McConnell won’t have a fair trial and I am with the Speaker that we should do everything we can to ensure he does. Ultimately, I do want the articles sent to the Senate for the very simple reason that I want the impeachment process to go forward. 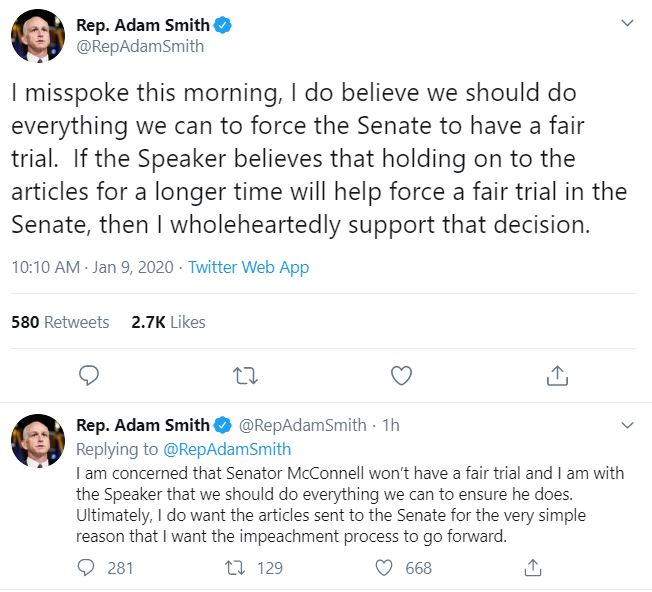 I’m really not sure why the left thinks she’s such a brilliant politician. HR 775 clearly starts it must be taken to the Senate.

They don’t think she is brilliant pol, but they do know she controls the campaign war chest. If you don’t do it her way, the highway is your only way!

I dunno. She looked over at the Senate and saw defeat. She’s withholding that victory from them. In prior impeachments nobody’s ever done that, or even thought of it, and the Constitution is not of any direct help on the point. It may not be brilliant but she’s got everybody a bit flummoxed at the moment. The Constitution does say the Chief Justice shall preside over impeachment trials. If John Roberts weren’t such a wild card they could throw it to him to rule on it.

I heard a rumor, but nothing ever came of it.

Someone just woke up to the reality that the media’s fixation on impeachment has sucked out all the air of political discourse meaning nothing is getting done.

Very little popcorn left on the shelves at Publix and Kroger. Stock up, folks! The show’s about to begin.

I think Adam Smith is suddenly saying he “misspoke”. LOL!!!

He was offered a nice little walk in Fort Marcy Park.

And that spike in the seismograph was the Founding Fathers turning in their graves.

I just have this picture in my head of someone sweeping into a room, accompanied by the Darth Vader Theme playing in surround sound. I wonder if Adam Smith had to be Force-Choked to retract his statement like this, or just threatened with it.

The way Pelosi is handling it, this impeachment will go down in Democratic history, right alongside William Jennings Bryant’s inaugural ball.

No male democrat has any balls. All neutered. Every one.

Dana Bash said on the show she received “a text from a House Democrat who explained why they’re not saying it publicly…’because she, Nancy Pelosi, never forgets.’”
———————-
He’ll be speaking soprano for a while now that he angered her highness.

Love him or hate him, Trump is exposing the sleazy underbelly of our Congress, and other government agencies. Why are we the people not taking to the streets?