AMCHA Initiative: “Distorting and blocking the flow of knowledge is a violation of the norms and standards of scholarly inquiry and undermines the university’s academic mission” 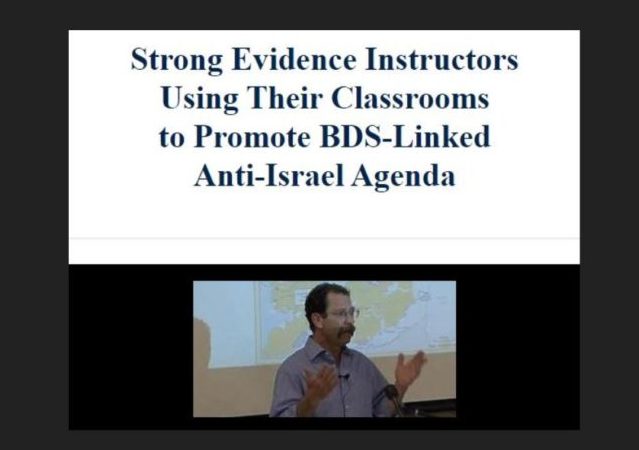 More Sharing Options
In the years since our founding, Legal Insurrection has covered anti-Israel activism on our nation’s campuses. Though expressions of anti-Zionism on campus are often the work of radical student groups such as Students for Justice in Palestine (SJP), behind many such groups and their anti-Israel messaging stands faculty support for the Boycott, Divestment and Sanctions (BDS) campaign.
For a recent example, see the latest attempt by a small minority of faculty to pass a BDS resolution at the American Historical Association’s annual meeting in American Historical Association Rejects Anti-Israel Resolution for the 4th Time.
Of particular concern are university faculty who use their classrooms as platforms for spreading anti-Israel propaganda.
Now, a new report released January 8th by the Santa Cruz-based AMCHA Initiative “provides the first-ever empirical evidence suggesting that faculty who support the academic BDS movement against Israel are actively promoting that political agenda directly to students in their classrooms.”

Founded by University of California academics Leila Beckwith and Tammi Rossman-Benjamin, the AMCHA Initiative monitors and combats anti-Jewish activity on hundreds of college campuses across the United States. The organization does excellent work; most recently, Legal Insurrection Foundation signed on to an AMCHA-authored letter expertly analysing and opposing a proposed anti-Israel public school curriculum in California (Legal Insurrection Foundation opposes proposed anti-Israel public school curriculum in California).
AMCHA’s newest report builds on the group’s prior studies, which we have covered in the following posts:
The study, which examined 50 syllabi at 40 public and private American colleges and universities, was undertaken by AMCHA founders Professor Beckwith (Professor Emeritus at UCLA, renowned scientist, researcher, and statistician with a background in psychology and child development) and Professor Rossman-Benjamin (expert on antisemitism and former faculty member in Hebrew and Jewish Studies at the University of California).
You can read the full study here (pdf) or below:
AMCHA Syllabus Study Report by Samantha Mandeles on Scribd
The study’s conclusions are disturbing; it found that:

The stark differences between the average percentage of course readings with pro-BDS authors within the two groups leaves little doubt that instructors who support academic BDS make a calculated choice to heavily weight their course materials with readings authored by BDS supporters. These results, in turn, imply that not only are academic boycotting instructors actively including pro-BDS readings, they are also severely limiting or completely excluding readings that would provide a more balanced picture of Israel.AMCHA Initiative fully acknowledges that freedom of speech protects faculty’s right to sign petitions and make extramural statements in support of academic BDS and academic freedom generally protects their right to develop and teach courses as they see fit. However, the report notes the serious and harmful consequences of faculty bringing their support for academic BDS into the classroom.

Distorting and blocking the flow of knowledge is a violation of the norms and standards of scholarly inquiry and undermines the university’s academic mission. Furthermore, faculty who use their classrooms to give academic legitimacy to a wholly one-sided, anti-Israel perspective, in compliance with the guidelines of academic BDS, can engender among their students hostility not only towards Israel, but towards Israel’s on-campus supporters. Such sentiments can easily lead to acts targeting Jewish and pro-Israel students for harm, as AMCHA’s previous research has shown.

But there are ways universities can combat professor-propaganda if they so choose; helpfully, AMCHA’s report includes concrete action items for university leaders to pursue in order to address these problems:

…it is up to academic departments and faculty senates to determine whether the promotion of one-sided, highly politicized course content is deemed a legitimate use of academic freedom, or an abuse of it. However, given the clear and present harm that such politicization can cause to our schools, our students and society, it is time for tuition and taxpayers, as well as state and federal legislators, to demand that faculty address this question forthrightly, and to hold them accountable for their answer.

Hell. You could be taking a class in carburetor repair in a junior college in Kansas and hear more anti-Jew, anti-Israeli, anti-American, anti-Christian, anti-capitalist, anti-white, anti-male, socialist racist tripe than a madrassa in Morocco. That is why they hire these losers. The sole reason they hire these losers. They sure as hell don’t care about educational fluency.

Sadly, you are precisely correct.

as a general rule Jewish kids are at the top of the class and make the schools look good.

i propose a boycott of non Jewish universities as well as research programs.

give our Jewish kids pride in our history and unique ethnicity.

we have enough wealthy Jews who can endow university programs so we do not need to grovel at the feeet of the haters in acadamey.

There’s a lot of Arab money too in our universities. Qatar has heavily funded programs at multiple universities. The Muslim orgs are very subversive, getting student senate resolutions passed at many universities supporting BDS.

Is there anyone anywhere who’s surprised by the results of this study?

Guarantee you that the VAST majority…if not ALL…of these academics are also Democrats.

My son’s experience at UCSD has been as much the activism of the administration as the professors. He has seen his more sane professors bullied by the administration to tow the activist line. I’m so glad to hear of this going on in the CA system. It is huge, full of activists and I honestly find most people don’t believe my son when he tells them how bad it is. Thank you for highlighting.

If you are a Professor/Teacher and your students know your Political Views ,, THEN YOU HAVE FAILED. He needs to be immediately Fired !!!

Keeping political views private applies to many areas. I mentioned before running a specific interest grass root lobbying interest for over two decades. I had to keep peace between people affiliated with all sorts of political beliefs, this wa necessary to keep them focused on our specific narrow issue.

It was amazing how fast these issues would create ill will and refusal to cooperate. Whatever my original political views were, I discovered that there were honest and dishonest people in every faction.

This is but the tip of the iceberg. These indoctrinators, posing as teachers, start their vile brainwashing in elementary school and it culminates in college. I have long ago lost respect for the bulk of these vermin.

Create a hall of shame.

This is not actually hard to do. Include this information on ratemyprofessors.com .

Out here in the real world — where you have to do actual work — an employee who decides to push a political agenda with co-workers is likely to get fired. And if the co-workers are incensed enough by the content that was pushed on them (particularly if nothing was done after complaining), they will likely sue the company for allowing a “hostile workplace” to exist. Real world; real consequences.

A few well-executed lawsuits should start to change this. But they will need to bring real pain to universities.