Now I have Sinead O’Connor in my head. 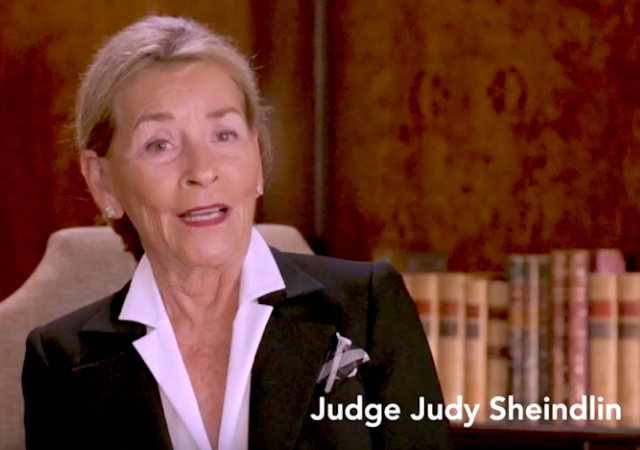 Bloomberg released the ad, titled “Judge Him,” early this morning:

“I like to say you can judge someone’s character by what they’ve done. Mike Bloomberg has done amazing things and will be a truly great president,” Sheindlin says in the 30-second ad. “No one comes close to Mike Bloomberg’s executive achievement, government experience and impactful philanthropy. His steady leadership will unite our country and bring us through these very challenging times.”

Bloomberg hopes lightning strikes twice since many believe Oprah Winfrey’s endorsement of then-Sen. Barack Obama in 2007 propelled him in the primary and general election.

At that time Winfrey held the spot as the top female in daytime television.

Her audience is largely female, mostly working class, and racially diverse — the kind of voters Democrats need to reach in November. Like Obama in 2007, the former New York mayor is not widely known. He can be easily categorized as an out-of-touch-billionaire with a less-than-warm campaign style. But millions of people honestly feel they know Judy Sheindlin — if that connection transfers over to Bloomberg, it could make a difference.

Judge Judy told People, “There isn’t anybody that could compare to Mike Bloomberg.”

Then Judge Judy had a guest spot on The View this morning where she again gushed over Bloomberg:

“I think that to define Mike Bloomberg as just another rich guy is one of the greatest injustices of this political campaign that we’re in,” she opened, adding “Mike Bloomberg is the only one of the candidates who has experience governing and managing and successful, and if he’s successful and happened to have made money being successful, that, folks, is the American Dream. That’s what’s supposed to happen.”

She insisted she has “never seen Americans so angry at each other as a family and it became sort of frightening when you couldn’t go to a social gathering and have a difference of opinion.”

Judge Judy told the panel that New York City had “a good feeling [under Bloomberg], it was a feeling that things were run effectively and brilliant during his” tenure as mayor.

But but but Judy is nothing but a PAID Hollywood Troll.

Remember Soros and his effort to “fundamentally transform” significant DA offices across the country? This is Bloomberg’s effort to seed state AG offices to push his agenda.

The Democratic presidential candidate and former New York City mayor likes a lot of what he sees in the Golden State and thinks its efforts on climate change, gun control and criminal justice reform sets a benchmark for other states to emulate.

“I think that California can serve as a great example for the rest of this country,” Bloomberg told supporters at the opening of his Angeles headquarters.

Judy as H Ross once put it (paraphrase)the only difference between him and a flaming bag on your doorstep was the bag.

notamemberofanyorganizedpolicital in reply to 2smartforlibs. | January 6, 2020 at 5:00 pm

Beg your pardon but who is H Ross?

Tom Servo in reply to notamemberofanyorganizedpolicital. | January 6, 2020 at 5:58 pm

gots to be Perot. Man had a way with words.

as to Judy – it’s amazing what some people will do for a paycheck.

notamemberofanyorganizedpolicital in reply to Tom Servo. | January 6, 2020 at 6:05 pm

Thanks that was my first thought – Perot, but the H. Ross threw me.

Yeah, but it’s a hell of a paycheck.

I have a relative working for the Bloomberg campaign. We talked about Bloomberg’s appeal outside the Upper East Side of Manhattan and I told my relative few know who Mike is, let alone vote for him. I understand Bloomberg’s plan is to saturate California, Texas, and New York with ads, the delegate rich states, then storm the convention.

I asked my liberal relative this: “If Bloomberg intends to self fund his entire campaign run, how will he know the pulse of the everyday voter since they can’t give $10 or $100. Got a shrug. Odd way to run a campaign.

Judge Judy is an active and loved resident of Greenwich CT, a once conservative town turned upside down from the push by the god awful Indivisibles. Ugh. Greenwich wealthy are fleeing faster than you can say Rumplestilskin!

I am surprised Judy’s a Bloomberg fan. I would not have guessed it.

notamemberofanyorganizedpolicital in reply to EOS. | January 6, 2020 at 5:02 pm

Bloomberg is even wasting his money running many tv ads in the middle of nowhere.

snopercod in reply to notamemberofanyorganizedpolicital. | January 7, 2020 at 7:37 am

Yes, we’re seeing them out in the woods of Western Carolina.

notamemberofanyorganizedpolicital in reply to EOS. | January 6, 2020 at 5:29 pm

BTW is her manse anywhere near Obama’s new mansion on Martha’s Vineyard?

As another poster on another site suggested, we should tell the Iranians that Barry’s has been bought by Trump.

Iranian presidential adviser posts list of Donald Trump’s properties in chilling hint of an attack on his real estate empire….

I never understood peoples fascination with her. she, and her opinions, mean absolutely nothing to me.

notamemberofanyorganizedpolicital in reply to dmacleo. | January 6, 2020 at 5:03 pm

Makes me think of that old Hollywood question.

dmacleo in reply to notamemberofanyorganizedpolicital. | January 6, 2020 at 5:21 pm

never heard that, did quick search but nothing popped up as relevant.
can you clue me in please?

notamemberofanyorganizedpolicital in reply to dmacleo. | January 6, 2020 at 5:32 pm

Well Hollywood productions use the phrase enough in their scripts….. “Who did they “fluke” to get that…. or as in “Who do you have to “fluke” around here to get a menu!”

Sub an other word for fluke……

dmacleo in reply to notamemberofanyorganizedpolicital. | January 7, 2020 at 11:41 am

I gotcha now, thanks for clarifying.

She appeals to people not smart enough to watch Springer.

That’s funny, because Jerry Springer actually now has a “Judge Jerry” TV show. I guess his human-cockfight TV show passing itself off as a talk show had just about run its course, so he decided to get into the daytime arbitration show genre, along with Judge Judy, Judge Mathis, The People’s Court, and all the rest.

a good feeling [under Bloomberg], it was a feeling that things were run effectively and brilliant

This is Bloomberg, the Big Gulp warrior, right?

Well, like any form of Affirmative Action, set the bar low enough, and everybody looks great.

“I like to say you can judge someone’s character by what they’ve done. _______________ has done amazing things and will be a truly great president,” Sheindlin says in the 30-second ad. “No one comes close to _______________’s executive achievement, government experience and impactful philanthropy. His steady leadership will unite our country and bring us through these very challenging times.”

Fill in the blanks with Donald Trump; it reads more truthfully.

I was hoping her curmudgedness was a republican.

Typical Leftist fossil, wants to control everything, all the time.

Typical! A liberal Jew endorses another liberal Jew! It is all they know or care about!

Judge Judy is pissing on our leg and telling us it’s raining.

I never could understand why anyone watched that rude, nasty harridan, and her endorsement means nothing to me. I have read the judicial canons of ethics; she violates them constantly, but she is not a real judge and is not bound by the Canons.

Unfortunately, the polls do show that she is popular. I just hope (and suspect) that her fans are too stupid to vote.

Judge Judy’s evangelicalism cautions us to take ‘common sense’ with a grain of salt.

Bloomberg looks like a character drawn by Dr. Seuss. Despite the millions he has spent on ads he still isn’t polling all that high.
I doubt “Judge Judy” will mean all that much to many people. She was entertainment, mainly because she would go off on truly stupid people in nasty ways.

I was trying to find out how tall the runty little fascist stands, found out he lied and added 3 inches to his height on his drivers license at one point.
God help America if the populace is stupid enough to elect this fascist dictator.

I already have a sore side from laughing at the democrats. Please try to keep it down a while.

Judy, divided county, angry people, did you vote for the chosen one?

The democrat primary is a farce. Super delegates will pick the candidate invalidating the voters choice. Bloomberg has the money to buy the nomination. He is a climate change supporter who flies to London and his personal Island several times a year on his private jet. He has heavily armed security, but feels the average law abiding citizen doesn’t need to be armed. He wants to tell us what we can eat. He had Black kids searched for no legal reason. He is a dangerous demagogue who has immense wealth, and owns his own media outlet. He is a dangerous.

Super delegates cannot vote in the first round. And they only make up about 16% of the total. They can’t do it alone. Tiny bloombut can’t just buy it.

Who is Judge Judy…?