All the Hollywood sacred cows were seared. 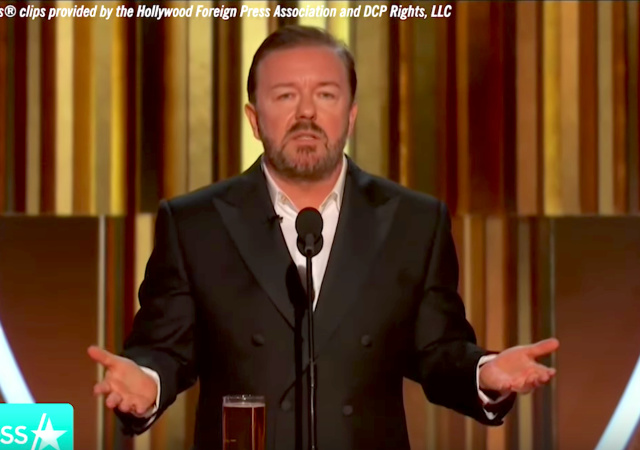 If you thought you spotted pigs with wings out your window tonight, there is a reason.

Comedian Ricky Gervais opened the Golden Globes awards ceremony with a roasting of the Hollywood elite that would rival anything a Game of Thrones dragons could do.

Gervais’ wrapped his monologue with perhaps a statement that will be among the best TV moments in history, by telling Hollywood:

“If you do win an award tonight, don’t use it as a platform to make a political speech.

You’re in no position to lecture the public about anything. You know nothing about the real world.”

“If you do win an award tonight, don’t use it as a platform to make a political speech.

You’re in no position to lecture the public about anything. You know nothing about the real world.”

Before this epic conclusion, the sharp-witted comedian incinerated the audience over its hypocrisy.

“You say you’re woke, but the companies you work for, I mean, unbelievable — Apple, Amazon, Disney — if ISIS started a streaming service, you’d call your agent, wouldn’t you?” he said. “If you do win an award tonight, don’t use it as a platform to make a political speech.

You’re in no position to lecture the public about anything. You know nothing about the real world. Most of you spent less time in school than [teen climate activist] Greta Thunberg. So, if you win: Come up, accept your little award thank your agent and your God and … off. It’s already three hours long.”

HOLY SHIT! Ricky Gervais calls out the #GoldenGlobes attendees for claiming to be woke, but being sellouts who would work for ISIS… and tells them to “F- Off!” instead of bothering people with their uninformed political opinions. pic.twitter.com/6mjEZcBuXq

Gervais also scorched the crowd with references to Jeffery Epstein and pedophilia.

At another point, Gervais noted that the Golden Globes was an old-fashioned awards ceremony, and argued the ceremony should just thank Netflix and get on with it. He noted he has a show on Netflix, Afterlife, about a man considering committing suicide after his wife dies: “Spoiler alert, there’s a season two, so in the end, he didn’t kill himself. Just like Jeffrey Epstein. Sorry, I know he’s your friend,” Gervais joked.

Epstein came up again when Gervais took aim at Quentin Tarantino’s 2019 film Once Upon a Time in Hollywood: “Leonardo DiCaprio attended the premiere and by the end, his date was nearly too old for him. Even Prince Andrew was like, ‘C’mon, mate…’ ” (Gervais was referring to allegations that Epstein’s former friend Prince Andrew sexually assaulted a girl trafficked by Epstein.)

Ricky Gervais at the Golden Globes:

“Shut up, I know he was your friend, but I don’t care.”#GoldenGlobes pic.twitter.com/jZ2nojKZI8

In a nutshell, Gervais seared the entire herd of Hollywood sacred cows.

The entire monologue is a masterpiece, and I hope all entertainers and media professionals take their message to heart.

I think he was looking for a way to not have to host another awards show. This aught to do it. The hollywood lecturers hate being told the truth.

The next step is asking why an already pathologically-narcissistic, self-aggrandizing and and self-reverential industry has an awards show, at all. There is no awards show in societal spheres that are much more important, such as medicine, finance, engineering, education and law enforcement.

These twits aren’t worth any attention, at all.

“There is no awards show in societal spheres that are much more important, such as medicine, finance, engineering, education and law enforcement.”

We do have a quasi awards show for medicine and science – its called the Nobel prize.

The leftist also have the Nobel prize for Peace – also known as the Anti-Peace Prize.

Obviously, but, the Nobel doesn’t feature the pageantry of an audience of sycophantic and self-congratulatory industry peers cheering one on. It’s totally and appropriately staid. There is no direct analogue in other industries to the off-the-charts narcissism and self-reverence that are inherent to televised awards shows in the entertainment world; that’s my point.

“There is no awards show in societal spheres that are much more important, such as medicine, finance, engineering, education and law enforcement.”

Well, the awards w/ award shows mechanism gets extended into these domains of activity among others. The cool kids have their TED, the dot-commies their … god, I can’t even keep track. In SW various method conferences amount to signaling that you are one of the good ones. The “publication” is as much signaling as anywhere else.

When a Nobel gets awarded to a guy who mostly voted “present” (perhaps damping out conflict thereby …) in aid of “supporting” a guy who demonstrated RightThink, so the Nobel folk said at the time, and lamented later, how much is “accomplishment?” The Nobel, having awarded Gorby, Arafat, n AIR Kissinger, maybe you need to be a murderous thug, to get a Peace Prize for stopping.

Myself, I’m gonna start a childrens’ campaign, so I can get a prize for stopping.

Did you notice how many closed eyes and pursed mouths were displayed by those twits? The fantasy folks cannot handle reality. Gervais’ last stand!

The look on Tom Hank’s face was total Forrest Gump!

I thought Tom Hanks looked like that rat bastard LBJ.

He has a sharp skewer, and watching audience’s react was a treat.

Oh yeah, this was one of the most beautiful YOLO moments I’ve ever seen! He’ll never be asked back, but he knows that, and he couldn’t care less. YOLO!!!

That is probably the most I have ever watched one of those shows in the last 30 years. Ha. Love the Epstein comment. Trump has so much material going in to 2020. This could be fun. We must never forget, they specialize in psychological warfare, so I don’t trust anything.

The look on Hanks face was priceless. Ricky should have asked him when he and The Rock were going to enter the Presidential race.

Perhaps half of the audience was sober enough to hear the monologue ,of that half maybe 25% understood what he meant. No worries, Gervais will never be invited back, and the air heads remaining in make believe world continue acting the fools/tools they are.

Sure didn’t take YouTube long to be offended. They removed the video.

It’s funny because it’s true. hollywood is a cesspool.

I have no idea if Gervais was serious or not. Actors have attacked the Hollywood elite before, either because they want to boost their notoriety or to save a flagging career. And, it usually works for them. The actors and actresses roll their eyes and shake their heads and then do what worker bees always do, meet up at the bar or in the powder room and say that they wished they had the stones to attack the entertainment elite, or wishing that they and THEIR agent had thought of it first. And, the entertainment elite ignores it all. They can afford to, because they control the whole game. Everyone in the entertainment business knows which side their bread is buttered on and how the game is played. They are all actors playing a part for public consumption, just like all of our politicians. It is all theater.

I was under the impression that Gervais was half expecting to be uninvited after he sided with Rowling in that trans mess. Since he’d already pissed off much of the woke brigade, he probably decided he might as well finish the job properly; it’s not like he had much to lose. And by God, did he give them a right bollocking.

He was dead serious. Obvious.

I think Ricky slept pretty well last night. He can pretty much live off of “Office” residuals anyway.

He must have hit a nerve–there’s a lot of wailing and gnashing of teeth today.

You do know what happened to good ol’ John, right?

(There’s a LOT of Salomes in Hollyweird….)

Yes, and I’m sure he’ll be very severely attacked, though perhaps not beheaded. And I imagine he just won’t care.

Looking at those jerks in the crowd… One of the best benefits of getting off Foxnews.com is not to look at these preening idiots.

Hollywood movies have become garbage: the celebrities a special kind of useful idiot rats and the people running it a bunch of pervs and pedophiles.

Thats was a Roast not a Host!

He finally made the farce worth watching.