“‘I think Bernie’s lying,’ Driver said, then explained ‘We see him, he slouches forward anyway Joy, but here he turtles…’.” 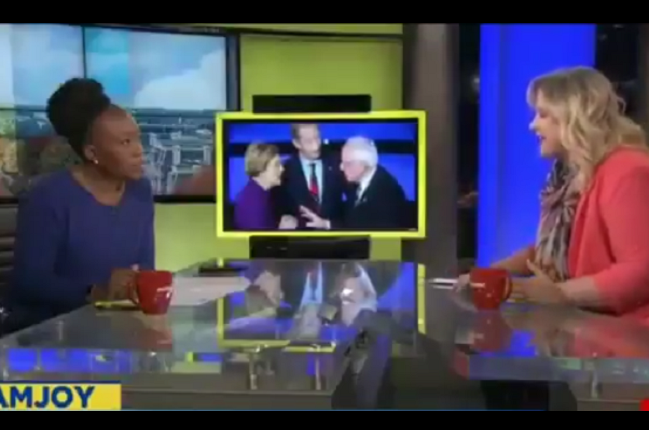 Just when you thought the on-going feud between Sens. Bernie Sanders (I-VT) and Elizabeth Warren (D-MA) couldn’t possibly become more absurd, it does.  Bernie has been accused by CNN, who relayed the message from the Warren campaign, of saying that a woman could not win the presidency. Only die-hard Warren supporters appear to believe Warren (or CNN).

This time it’s MSNBC host Joy Reid serving up the absurdity in the form of a body language expert who supposedly proves that Warren is telling the truth and Bernie is lying.

MSNBC host Joy Reid was joined by body language expert Janine Driver, who assessed the post-debate confrontation between Elizabeth Warren and Bernie Sanders, and concluded that Warren was telling the truth, while Sanders was “lying.”

On Saturday morning’s edition of AM Joy, Reid kicked off a lengthy panel segment by summarizing the timeline of the controversy, which began with a Sanders campaign volunteer script that took aim at Warren’s “affluent” supporters, which was followed by a story in which 4 sources recalled Warren claiming that Bernie Sanders told her, during a private meeting in 2018, that a woman could not beat Trump in the 2020 election.

. . . . Reid began by telling Driver that when Warren “rolled up on him, was like ‘No no we’re not going to handshake now, you called me a liar,’ that felt to me like a lot of the ways that women have to operate and work in the professional environment where you can’t be angry or you’re the bad [one].”

“Most of us want to deal with it afterwards instead of just going right for it,” Driver said, and added “The fact that Elizabeth Warren not only came right over, she squared her body, he’s giving her the cold shoulder, he doesn’t turn to her, she says ‘I think you just called me a liar on national TV,’ if you go back to Wienergate, you go back to all of these political armageddons when it comes to deception, no one calls someone else a liar.”

“And she comes right out and says wait a minute did you just call me a liar?” Driver continued. “This is indicative of someone who’s telling the truth, because if she was lying it’s unlikely she would have confronted him in that moment.”

. . . . Reid returned to Driver, and said “Bernie Sanders does have a sort of physicality when he talks that is a shaking your finger at Hillary Clinton, shaking your finger, shoving, his physicality makes me think yeah, he could have said ‘Listen I think in this environment a woman can’t win. That doesn’t seem like a crazy thing for him to say.”

“I think Bernie’s lying,” Driver said, then explained “We see him, he slouches forward anyway Joy, but here he turtles, and if you look at his eye level where he normally answers questions, when he makes the denial, his whole shoulders come up like a little kid getting caught, his eye level is below his shoulders, this is trying to hide in plain sight.”

Joy Reid should invite this body language expert back, tell the story about the time when a computer hacker inserted homophobic statements into her old blog posts, and ask the expert to analyze whether she's lying. https://t.co/Wvariq0Vb9

The batshit huckster @JoyAnnReid brought on to do science on Bernie Sanders. The liberals are not handling his strong polling well https://t.co/EjgosOMnFc

Why would @JoyAnnReid have a Trump supporter on MSNBC to make her point?

Let’s me real: It’s 2020, Trump has put us in an exhistentual crisis, the debates are ratings games and cable news doesn’t have experts on, but barters with mercenaries as commentators. https://t.co/x8bQCy43EZ

Joy Reid is grandstanding for ratings. Body language is not scientific or reliable. Why does MSNBC allow this tabloid crap on the air? I donated $52 in two weeks because of Warren and Reid's pathetic attacks.#AMJoy pic.twitter.com/3v5niqnKMB

Every ounce of respect I had for Joy Reid just flew out the window today..

Of course this was ridiculous and a clear attempt to prop up Warren’s flailing campaign, but the socialist left’s outrage is rather ridiculous, too. They can apparently only see media bias when it is used against Bernie. Weird how that works.

In a short time the point will be moot.

It may become moot, but the “gender card” will not go away. Every doubt of Warren will be “sexist”.

Allow me to eye roll as pure mental protection.

notamemberofanyorganizedpolicital in reply to Neo. | January 18, 2020 at 5:13 pm

Remind all Bernie supporters that the DNCNN-MSNBC and their primary is ALL RIGGED for Warren.

Even Obama is backing Warren, so it’s as plain as the big nose on Reid’s face, the DNC is trying to steal the primary away from Bernie the 2nd time

Again remind all the Bernie supporters you know of this.

I don’t need an “expert” to tell me bernie was lying, or warren. I know they were both lying because their lips were moving.

notamemberofanyorganizedpolicital in reply to CKYoung. | January 18, 2020 at 5:15 pm

If DEMS are breathing – they’re lying.

It’s what they are.

Frankly, this is what Obama was warning Democratic donors of a few weeks back.

They are stories out there that Bernie supporters will sit out the election if Bernie is not selected. All the Democratic candidates wannabes are on the Left-side of the normal curve, but each has a flavor unique to themselves. Bernie’s “Commie-fruity” probably isn’t going to be this election’s flavor, but Warren’s “Commie-fruity-lite” is not a winning flavor either.

Just like 2016 the Bernie Bros will be disappointed in 2020. As usual the Dems are trying to keep him from getting the nomination with outright lies.

Let’s see how his supporters feel when election time comes around.

A Bernie Presidency would destroy the Democratic Party

Actually… a Bernie Presidency would destroy the *old* Democrat party. Speaker Cortez would start the first ex post facto Trump impeachment inquiry, FBI director Warren would order Trump’s arrest on charges of tax evasion, and the leftists would run wild over the whole party, running out anybody who does not swear to their extreme positions.

Miserable cretins, the lot of them.

The DNC doesn’t want Bernie, he is not a Democrat other than to run for President, which doesn’t sit well with the powers of the party. This was a set up. CNN the ever faithful propagandist network is working it hard to push this.
It seems to me there was probably some conversation that occurred which Warren twisted to her benefit to be able to lie. Bernie sounded as if he were to respond that she called him a liar, but he held back from doing so.
Warren doesn’t have a shot to win. It is more likely that Bernie said she couldn’t win, which being a woman she expanded the meaning. Just like she does all the time.
I get it politicians lie frequently, but the left are beyond the pale when it comes to lying. They have to in order to sell their bill of goods to morons.

Given the venomous reactions by both (assuming this is not just another time Warren is lying for personal profit again – so big assumption), this may be a simple misunderstanding and I think I may know what might have been said that caused it. However as I am enjoying watching the fighting and hope the Democrat unity goes down in flames, I will remember to post it at the end of year post election if it comes up again.

Personally, I think Bernie said that SHE can’t win, and she spun this to “no woman” could win. She’s a ridiculous huckster and liar and faker. Even if Bernie did say this and people could hear it for themselves on vid, they would believe him over her. She’s THAT phony and untrustworthy.

Warren will ALWAYS lose a he said/she said because she is known, proven liar who lies.

“Body language expert”? Please, just bring on the astrologers and entrail-readers and be done with it.

We agree for once. If you want to see BS being sold, check out the TED talk on this.

On the other hand, a party that believes in micro-aggressions should have no trouble accepting the testimony of a body-language “expert”.

Watch Mandy Bombard, you’ll see how a body language expert can be so amazingly accurate:

I don’t care who is doing the analysis, the whole practice is a huge exercise in confirmation bias. Most times the analyst has other information to form their opinions and tell them to look for things that say, “hmm yep that’s consistent with what I already know.”

Individuals aren’t predictable enough to perform uniformly the way lab rats and other non-primate animals do. The difference is our cerebral cortex, which is much larger per body weight than any other animal on earth. It leads to unpredictable behaviors on an individual level. You can study patterns and research outcomes, but beyond that, you have inconclusive conjecture that is amazingly consistent with the affirmation of biases.

It’s voodoo, just like “graphology” and “iridology” and palm reading.

You know, FOX should do just that (bring in an astrologer), to ‘prove’ the exact opposite …

Joyous Reid takes her marching orders from Oprah …. and Oprah has spoken.

You know what? In a funny kind of way, as much as I viscerally dislike the Democrat messages, motivations, and means, I don’t mind having the deck stacked against a Socialist. Allowing an avowed Socialist of Bernie’s stripe to participate without prejudice in a national election is skin to agreeing to play Spin the Bottle with a large snapping turtle. As the saying goes: You can vote Socialism in, but you’ll be shooting your way out.

THAT you call “speaking”?!?

If not for this site I would have never known about the two idiots on the show. Let’s raise the bar a little eh?

When you argue with a fool, you then have 2 fools arguing.

Don’t bother with these msnbc fools. Let them die on the vine.