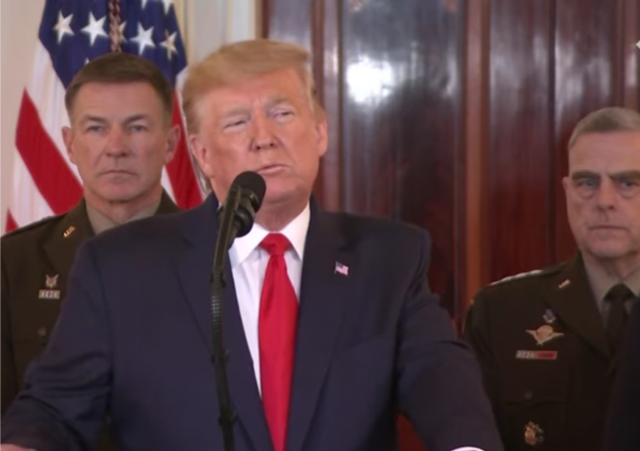 President Donald Trump has rallied the support of the European and NATO allies in his remarks following the last night’s Iranian rocket attacks at U.S. bases in Iraq.

President Trump urged the NATO members “to become much more involved in the Middle East process.” Addressing the media at the White House, he urged the world powers to abandon the Iran nuclear deal. “The time has come for the UK, Germany, France, Russia and China to… break away from the remnants of the Iran deal or JCPOA,” he added.

Instead of launching a retaliatory military action in response to the Iranian offensive, the U.S. President imposed new sanctions on the regime. Tehran “appears to be standing down,” he concluded.

President Donald Trump seemed to seek a de-escalation Wednesday in the rising military conflict with Iran, saying Tehran “appears to be standing down” after its missile attack on U.S. targets in Iraq.

In a 10-minute White House speech, Trump vowed to keep up the pressure on Iran with “punishing” new sanctions on top of the heavy economic restraints already in place, but didn’t suggest the U.S. would be taking any additional military action in response.

“Iran appears to be standing down, which is a good thing for all parties concerned and a very good thing for the world,” Trump said. “No American or Iraqi lives were lost because of the precautions taken, the dispersal of forces and an early warning system that worked very well.”

Trump made the comments in an address to the nation Wednesday from the White House less than a day after Iran fired more than a dozen ballistic missiles at two Iraqi air bases housing U.S. and coalition forces in retaliation for the killing of a top general.

President Trump’s call to abandon the nuclear deal comes at a time when Iran is proceeding with the enrichment of weapons-grade uranium. The regime was scrapping the restrictions on uranium enrichment set in place by the 2015 nuclear deal, Iranian state TV declared on Sunday.

Following Iran’s announcement, Germany has redoubled its efforts to ‘save’ the Obama-era agreement. German Chancellor Angela Merkel is heading to Moscow this weekend for talks with her Russian counterpart Vladimir Putin.

“Trump’s speech was only meant for public” consumption, German newspaper Die Welt commented. Accusing the U.S. president of playing to his base, the daily said: “In his speech he only had one crowd before his eyes — his supporters.”

The German newspaper Berlin Morgenpost did not see Trump’s remarks as a step towards easing the conflict. “The situation in the Middle East intensifies further,” the paper commented.

German weekly Der Spiegel echoed that pessimism. In his address, President Trump “avoids a direct retaliation, but threatens with new sanctions,” the news magazine remarked. French President Emmanuel Macron and other European politicians have been calling for the lifting of sanctions and opening of talks with Tehran.

Responding to Trump’s address, the UK newspaper Independent noted that Iran was manipulating U.S. domestic politics, especially the ongoing impeachment process, to achieve its geopolitical goals. “Senior Iranian leaders know Trump is in political trouble, and have been keenly listening as Democrats seeking to replace him vow to restore the nuclear deal,”

“EU leaders relieved as Trump steps away from Iran conflict,” UK newspaper The Guardian reported. “European leaders have breathed a sign [sic] of relief after Donald Trump heeded their public and private pleas to draw a line under his conflict with Iran and not respond militarily to the Iranian missile attacks on US forces in Iraq.”

Recounting the European diplomatic efforts to ‘de-escalate’ the situation, The Guardian noted:

The UK prime minister, Boris Johnson, called on all sides to dial down the crisis while defending the right of the US to act in self-defence.

Ursula von der Leyen, the European commission president, said: “The use of weapons must stop now to give space for dialogue. We are called upon to do everything possible to rekindle talks.”

The EU’s foreign affairs chief, Josep Borrell, said: “One thing is clear – the current situation puts at risk the efforts of the last years and also has implications for the important work of the anti-Daesh [Isis] coalition. It is in no one’s interests to turn up the spiral of violence even further.”

The French foreign minister, Jean-Yves Le Drian, said: “The priority goes more than ever to de-escalation. The cycle of violence must end. France, for its part, remains determined to work to ease tensions. France recalls the importance of continuing the fight against Daesh, with full respect for the sovereignty of Iraq.”

Mixed responses from the media came over the U.S. drone strike that killed Qassem Soleimani, the chief of Iran’s elite Quds Force. Soleimani, who was on the U.S. and EU terror list, was behind the recent storming of the U.S. embassy in Baghdad and carried responsibility for the killing of hundreds of American servicemen and women in Iraq directly.

Germany’s Bild, Europe’s most-read newspaper, welcomed Soleimani’s killing with the headline “Trump has freed the world of a monster.”

Describing him as “an enemy of our civilization,” the Bild commented:

Soleimani, the world’s most repelling and bloodthirsty terrorist, who brought suffering and harm over humanity on the mullahs’ behalf, was an enemy of our civilization. He represented the unbearable thought that murderers will live more safely and be more untouchable the more people they kill (with the support of the state).

His violent and overdue end will not stop global terrorism, but the image of his burnt-out car still sends out a powerful message. US President Donald Trump has made it clear that the worst figures in the world, however big-mouthed and ruthless they may be, cannot hide from America’s strength.

President Trump has freed the world of a monster whose aim in life was an atomic cloud over Tel Aviv. Trump has acted in self-defense – the self-defense of the US and all peace-loving people.

German state broadcaster Deutsche Welle, which often toes the government’s line, called the anti-terror strike a “Pyrrhic victory” for the United States. Describing the significance of Soleimani killing, regime’s “second most powerful man,” Deutsche Welle noted that “Khamenei is undoubtedly the religious and political leader of the republic, but it was Soleimani, his trusted associate, who was its military leader.”

Rattled by President Trump’s decision to take out the regime’s top terror operative, the Islamic Republic declared ‘jihad’ against America. “All Enemies should know that the jihad of resistance will continue with a doubled motivation, and a definite victory awaits the fighters in the holy war,” Iran’s leader Ayatollah Khamenei said in a televised statement. Yesterday’s strike was part of that jihad offensive.

Obama must be spinning his panties. Kerry must be worried he’s going to be indicted for Logan Act violations and bribery money he’s received from Ukraine and Iran.

If we had an honest AG, Kerry would be worried, but as it is, he’s as smug as Comey in the knowledge that he is untouchable

We’ll find out if Barr is the real deal or not. And soon.

The Logan Act is unconstitutional, which is why in over 200 years no prosecutor has ever dared to try to enforce it; they know that the first time it ever gets before a judge it will be struck down.

And there’s no evidence Kerry got any money from the Ukraine or Iran. That’s just FineReport’s own wild guess, based entirely on his dislike for Kerry and wishful thinking.

It will be interesting if/when Iran makes good on their threat to release the list of whom they’ve all bribed.

We’ll stop doing the ME police work if the feckless slave laboratories know as the EU do not step up.

Die Welt and Berlin Morgenpost both missed the point, probably on purpose. This was not a deescalation, it was an ultimatum spoken softly. Why else have a wall of generals behind him?

I hope all the Iranian leaders are holding their breath while they are waiting. Dems cannot help themselves, their traitorous behavior is alienating more voters.

The only ones defending Iran are the Democrats and NeverTrumpers. The world, including China and Russia, is relieved that the war on terrorism is finally shooting for the head and scoring big.

Trump didn’t “step away”, Iran did. It is inconceivable that all 15 of those very accurate missiles missed their targets. They got the flash and bang on video for home consumption but in regards to jihad? They knuckled to Trump. They fear Trump.

Trump also made it clear that this is Europe’s problem and they better get involved because this is their fight. We will respond to attacks that target Americans but we will not be drawn into a war to save Europe’s skin. They should start by addressing Iran’s nuclear problem.

“President Trump’s call to abandon the nuclear deal comes at a time when Iran is proceeding with the enrichment of weapons-grade uranium. The regime was scrapping the restrictions on uranium enrichment set in place by the 2015 nuclear deal, Iranian state TV declared on Sunday.”

It’s cute that Iran actually thinks anyone in the informed world believes that they are ever stopped military development actions such as these.

They hated Reagan for being unpredictable too.

Did he step away? One thing I’ve learned about Trump is he is good for his word. Maybe he did hit 52 targets and the Iranians are mum because, like the “earthquake”, they can’t really come out and complain that we MOABed a site that was not supposed to exist. I like thinking all 52 targets were targets just like that. It is brilliant if true because the Iranians can’t complain without exposing their nefarious deeds.