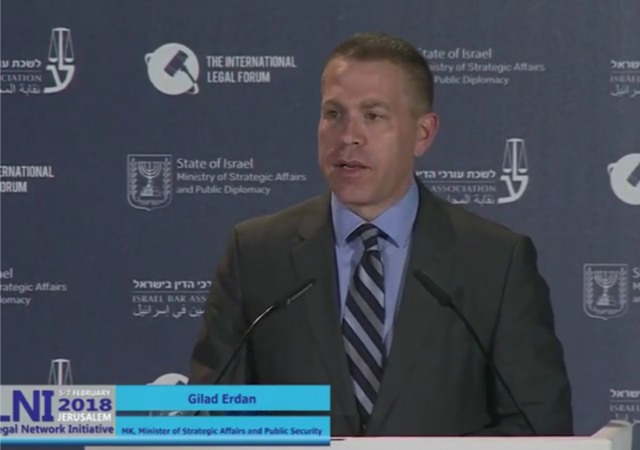 Minister Erdan wrote a letter to the EU’s newly appointed Foreign Minister Josep Borrell, which cited close links between the EU-funded NGO “Al-Haq” and the terrorist group Popular Front for the Liberation of Palestine (PFLP).  He urged Borrell to “cease funding” to entities “affiliated with terrorist groups.”

The EU must not give in to Palestinian organizations’ demands that it allow aid to go to groups with ties to designated terrorist groups, Strategic Affairs Minister Gilad Erdan wrote in a letter to the EU’s new Foreign Minister Josep Borrell.

Erdan’s letter, sent on Tuesday, referred to the many ties between the Popular Front for the Liberation of Palestine, designated a terrorist group in the European Union, United States, Canada and Israel, and Palestinian NGOs that call themselves human rights or civil society organizations.

The minister pointed to recent media reports that Palestinian NGOs have demanded the EU erase a stipulation that aid must be sent only to organizations with no ties to EU-designated terrorist groups, claiming that the PFLP and others are political parties, according to NGO Monitor.

Two weeks ago, the Shin Bet (Israel Security Agency) arrested about 50 members of the PFLP in relation to the August 2019 bombing that took the life of 17-year-old Rina Schnerb and wounded her brother and father.

Among those arrested were senior officials in the Palestinian NGO Addameer, such as Khalida Jarrar, former vice president of the organization and head of the PFLP in the West Bank.

“Alongside [Addameer’s] ongoing campaign to boycott and delegitimize the State of Israel, [it] calls for the release of PFLP terrorists while providing them with legal representation,” Erdan wrote.

Erdan expressed concern that Al-Haq, a Palestinian NGO that receives significant aid from the EU, transferred funds to the PFLP. Al-Haq’s director, Shawan Jabarin, is a convicted PFLP terrorist.

“Over the years, Jabarin has employed other PFLP operatives who also have served prison sentences,” Erdan stated. “According to data released by the EU regarding 2018 (data concerning 2019 has not yet been published), the EU has provided Al-Haq substantial financial support. Moreover, there are grounds for concern that, because of the close connections of the two, funds may have been funneled from Al-Haq to the PFLP.”

As such, Erdan asked the EU to make sure its funds go only to organizations with no such ties to terrorist groups, and that beneficiaries increase their transparency.

“I urge the EU to safeguard the implementation of such criteria and cease funding to Al-Haq and any organization that is affiliated with terrorist groups,” he wrote.

The official Israeli request comes after leading Palestinian groups refused aid from the EU since they would have to cut ties to terrorist groups. Brussels had reportedly told Palestinian NGOs to stop siphoning off aid money to EU-designated terrorist groups. The move triggered outrage among the recipients, with many lobbying the EU to overlook their affiliations to terror groups.

“More than 130 Palestinian organizations have refused to sign a European Union grant request that stipulates among its criteria that recipients must refuse to transfer any EU assistance to terrorist groups or entities,” the newspaper Israel Hayom reported on Tuesday. These NGOs “decline to sign the request, claiming Palestinian terrorist groups are merely ‘political parties,’ according to a statement by Israel’s Strategic Affairs Ministry.”

There is not only an ideological affinity between many Palestinian NGOs and terrorist groups like Hamas and PFLP but also a direct financial relationship between both. Around 30 active and “retired” terrorists are on the payrolls of BDS-linked NGOs, Israel’s Ministry of Strategic Affairs exposed earlier this year. “Terrorist operatives assist NGOs in fundraising, share human resources and jointly promote public campaigns,” the reported found. Some of these prominent terror operatives include Palestinian hijacker Leila Khaled, former Hamas “military” operative Muhammad Sawalha, and convicted terrorist Shawan Jabarin.

The EU is the leading patron of Palestinian NGOs, many of them linked to terrorist groups and involved in incitement against Jews and the State of Israel, research shows. “The German federal government provides millions of euros to political advocacy NGOs in Israel and the Palestinian Authority, through a variety of frameworks,” a November 2019 report by the watchdog group NGO Monitor disclosed. “German federal funding is allocated to, among others, organizations that promote anti-Israel BDS (boycott, divestment, and sanctions) and “lawfare” campaigns, anti-Zionism, a “one-state” vision, antisemitism, and violence.”

“The European Union (EU) is the largest governmental funder for NGOs active in the Arab-Israeli conflict, including some of the most radical and politicized groups,” NGO Monitor‘s research shows. “Under the guise of human rights, democracy, and good governance, EU support is transferred to Israeli, Palestinian, and European NGOs that promote anti-Israel BDS.”

Palestinian terrorist groups are using NGOs to delegitimize the State of Israel and incite antisemitic hatred since war and terror have failed to destroy the Jewish state. In recent years, the BDS campaign has been driving the growing antisemitic hate on Western college campuses and European streets. BDS activists are trying to infiltrate workers’ unions, left-wing students groups, and even Christian groups in the West, using them as tools in their jihad against Israel. The example of the British Labour Party shows how anti-Israel activists have managed to penetrate the party’s rank and file, turning it institutionally antisemitic.

THE EU is a Terrorist Organization itself!

The truth is that the EU has committed cultural suicide, and unless they start throwing Muslims out, they will be overrun by a four fold reproductive rate by Muslims each generation.

notamemberofanyorganizedpolicital in reply to JusticeDelivered. | January 3, 2020 at 12:28 pm

Repatriation – the European nations have done it once before – after WWII.