UK Treasury: Ban “includes the Military Wing, the Jihad Council and all units reporting to it, including the External Security Organisation.” 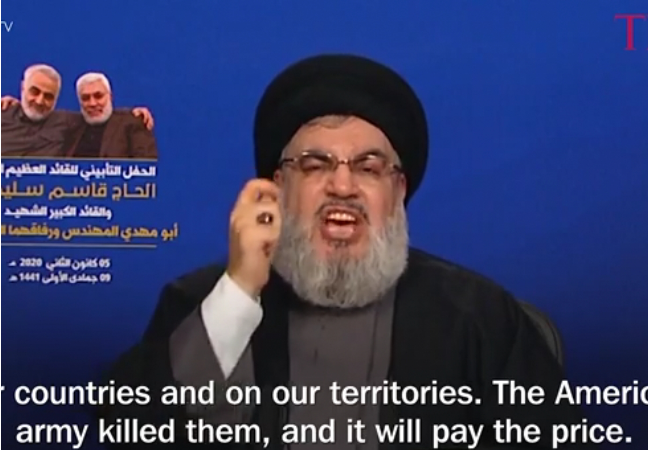 The United Kingdom has joined the United States in banning the Iran-backed terrorist group Hezbollah in its entirety. The decision taken by the UK Treasury on Friday will lead to the freezing of all assets belonging to the Lebanon-based terrorist organization. The “failure to comply with financial sanctions legislation” or seeking to “circumvent its provisions” will be regarded as criminal offences, the UK  Treasury said in a statement.

Friday’s announcement puts a blanket ban on Hezbollah. Previously, the terrorist organization was allowed to operate and hold assets in the UK under the guise of its “political wing.” In its latest statement, the British government refused to make a distinction between the military and political arms of the Shi’a terrorist group, an argument often made by the European Union for not banning Hezbollah activities in the continent.

“Hizballah itself has publicly denied a distinction between its military and political wings,” the UK Treasury said. “The group in its entirety is assessed to be concerned in terrorism and was proscribed as a terrorist organisation in the UK in March 2019. This listing includes the Military Wing, the Jihad Council and all units reporting to it, including the External Security Organisation.” [View the UK Treasury’s full communique in PDF version here]

The British government has moved to freeze all assets connected Hezbollah after proscribing the entire group as a terrorist organization last year, according to Reuters.

Britain’s Treasury announced the development in a statement Friday, saying it was given the authority to do so under its Terrorism and Terrorist Financing rules.

For years, only Hezbollah’s military wing was proscribed as a terror organization by members of the European Union.

But in February 2019, the UK’s Home Secretary Sajid Javid decided to place the entire Hezbollah organization on a terrorist blacklist, saying the move was in response to its destabilizing activities throughout the Middle East.

The entire group is considered a terrorist organization by the United States, Israel, Canada, the Arab League, Australia along with various countries in South America.

The United States and Israel welcomed the move. Israeli Public Security Minister Gilad Erdan described it as an “important step” and urged the EU and individual European countries to follow suit. “Hezbollah and its Iranian backers are behind numerous attacks which have murdered innocent civilians all over the world. Europe is waking up to Iran’s terrorist activities and their murderous proxies,” he said.

“We would like to congratulate the United Kingdom,” said Brian Hook, the U.S. State Department’s special envoy for Iran. “There is no distinction between Hezbollah’s political arm and its military arm.”

The hardening of the British stance comes amid growing Hezbollah activities in the country. Besides carrying out a major money laundering operation in Europe valued at $200 million each month, the terrorist group uses mosques and Islamic religious organizations in Europe to find new recruits and raise funds. In June 2019, Hezbollah terrorists were caught stockpiling tons of explosives in north-west London.

With the UK tightening its grip on Hezbollah, the terrorist group has made Germany its base of operation in Europe. While the EU banned Hezbollah’s “military wing” in 2013, Berlin continues to allow the “political” arm of the terrorist outfit to operate on their soil.

Germany is home to about 1,050 Hezbollah operatives, the German domestic intelligence agency estimated in its 2019 annual report year. Mosques in Germany have been accused of working hand in hand with Hezbollah.

“Germany is incredibly important for Hezbollah, because Germany is an Eldorado for money laundering,” U.S. envoy to Germany Richard Grenell told German media in September 2019. “According to the German government’s own domestic intelligence service report, Hezbollah sympathizers are meeting, organizing and raising funds in mosques and cultural associations in Germany,” Ambassador Grenell wrote in an op-ed  around that time.

Iran-backed Hezbollah is part of Tehran’s strategy of exercising control over the ‘Shiite Crescent,’ a territory stretching from the Persian Gulf to the Mediterranean Sea. Qassem Soleimani, Iran’s top terror operative, who was killed in a U.S. drone strike in early January, was the chief mentor of Hezbollah and its leader Hassan Nasrallah. Hezbollah chief Nasrallah has joined the recent Iranian call to wage “jihad” on U.S. and allied troops in the region, calling “all resistance fighters worldwide” to avenge his paymaster Soleimani’s killing.

They have an explicit goal of murdering their neighbors. They should have been banned long ago.

Corbyn must be on suicide watch.

Obama’s deals all go critical. I think that every time some Iranian knucklehead shoots their mouth off that we should destroy Iranian infrastructure.

The UK government has too many Muslims in its ranks for this ban to be effective.

The UK, and every other western country needs to be downsizing their Muslim population at a rate at least ten times their reproductive rate. This is a difficult problem which must be addressed. Delay will only make it worse.

The anchor EU states continue to support terrorism in the hop the alligator eats them last.

We need to drop any and all support economically and militarily to any country that doesn’t follow our lead.

interesting how far things over there fall apart when a real leader says enough.

Bet that “boss” was a crooked ol’ Leftist! Snark.

Soon, the Democrats, their NeverTrumper RINO cousins, and Hollywood will be the only people on earth defending terrorism.

Doesn’t the moron pictured at the head of the story look a little like Amy Klobuchar?

About fucking time!! There is no moderate arm of herbollocks!

Thank fuck America has a leader with bslls the size if Bernies fuckuhg bald head!! And let’s not kid ourselves, this is only happening because big balls Trump is in power!!