“They think you’re a joke.” 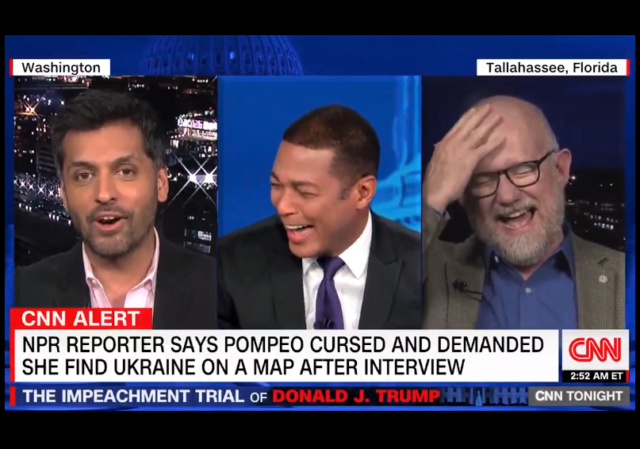 Tuesday, Professor Jacobson blogged about one of THE most tone-deaf cable news segments I’ve ever seen. A CNN panel hosted by Don Lemon, billing Rick Wilson, (a former Republican political consultant who sold his soul to the NeverTrump brigade and now poses as a token “Republican” on CNN and MSNBC to trash actual Republicans and right-leaning folk) were overcome with fits of laughter while mocking Trump and Trump supporters as bassackwards hillbillies, ignoramuses, and simpletons.

They still don’t get it. Clearly.

The arrogance, the dismissiveness, the smug cackling, the accents.

If Donald Trump wins re-election this year, I’ll remember this brief CNN segment late one Saturday night in January as the perfect encapsulation for why it happened. pic.twitter.com/8kQ6zN9AZV

It also perfectly captures the microcosm of coastal media and Trump Derangement Syndrome who have learned nothing, nada, zip from 2016.

Anyway, shortly thereafter the good folks manning the RNC digital front cut the segment, spliced it with the Democrat presidential candidates saying similarly disparaging nonsense, and outside of dramatic intros and outros, added one pithy little statement — “They think you’re a joke.”

It’s all too easy.

I’m only surprised it took this long. Should’ve been live as a commercial within hours.

Excellent ad, but they need to fix the captioning at the bottom. They wrote “incredulous”, but Wilson actually said “credulous”. Someone should tell them to fix that.

No one watches CNN–but a lot of Trump supporters will get fired up by the President’s RT and ads like this. Thanks for helping to re-elect the President CNN.

I spent my whole life working with many of the smartest people in America. Plenty of them support Trump.

Why all of us “Deplorables” must be kin.

Sonnys Mom in reply to notamemberofanyorganizedpolicital. | January 30, 2020 at 12:31 pm

Can you imagine–this musical ran in New York City from late Nov 1949 to early Sept 1950. NYC was a very different place in those days.

What a sweet look back to the sentiment of “we’re all in this together” of the 1940s-1950s. Brings me back to a time when most Americans loved our country. Thanks!

Ad needs to be shortened to about 20 seconds and made much more hard hitting.

Let’s see CNN give this crazy idea the same treatment.

Be sure to read the comments there.

Both would be a disaster no matter where they were put.
Except in a cell.

You’ll never do lunch in this town again.

Rick Wilson’s greatest notoriety and claim to fame has come from opposing Trump. He has never been a Tier One campaign consultant or manager for a Republican of great gravity. It is hard to imagine that any Republican campaign would or could ever hire him now because he is radioactive.

But it may work out for his career if he flips and works for Dem candidates.

Doubled over in stitches of laughter … over such clever, sophisticated, and nuanced jokes is yet more evidence of why they are our betters.

Rick Wilson actually thinks he’s on comedic fire and just killing it with his awesome wit.

And today I saw him reply to a tweet in which he mocked the appearance of a Trump supporter. Yes, the hideously homely Rick Wilson taking a shot at someone’s looks.

What’s so funny? Is it the claim that Lemon rubbed his genitals in a bar and shoved his fingers under some guy’s nose? Now that’s funny!

Yet, the Dhimmi-crats still believe that the sainted Obama was allegedly so sophisticated, worldly and sagacious, the self-reverential dunce who flippantly and callously dismissed ISIS in its ascendancy as an L.A. Lakers “jayvee” squad; he who foolishly and sanctimoniously invoked the Crusades to admonish Americans to not criticize contemporary Islamic barbarism, torture and murder.

FINALLY!!! The Dhims provide so much opportunity, not to mention free oppo research. Time GOP ads took advantage of it.