“It will be nearly impossible to match last quarter at this point. But we need to start closing the gap as quickly as possible.” 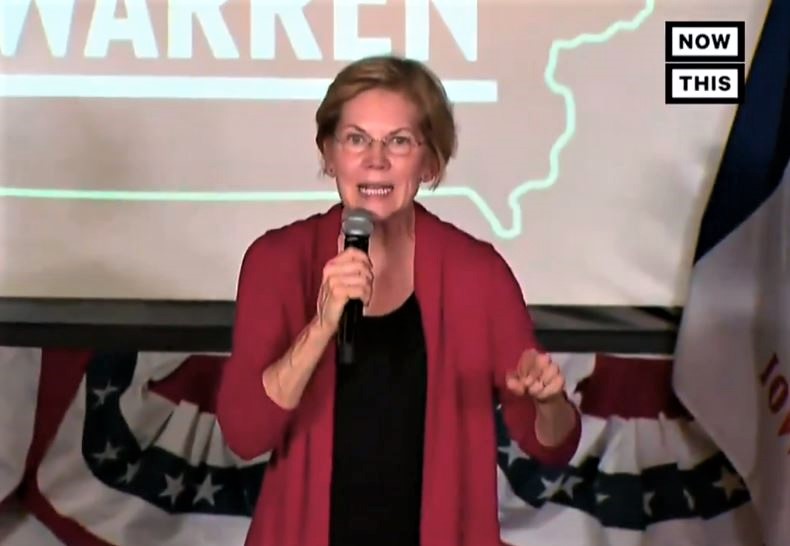 Sen. Elizabeth Warren (D-MA) has seen her numbers drop amid numerous missteps.  Along with the dip in polling, apparently, has come a decrease in donations.  Her campaign sent out an email that begged recipients to give to her campaign before the end of the quarter on December 31st.

We see these end-of-quarter emails all the time from presidential (and other) campaigns, and it’s usually a ploy to squeeze more money out of supporters.  That may be the case here, or it could be a sign that things are not well at Warren HQ.

Sen. Elizabeth Warren (D-Mass.) emailed her supporters this morning, urging them to donate more as the fourth fundraising quarter — and the year — comes to a close.

“So far this quarter, we’ve raised a little over $17 million,” the email says. “That’s a good chunk behind where we were at this time last quarter.”

This is true; Warren’s campaign raised $24.6 million in the third quarter, second to only Sen. Bernie Sanders’ (I-Vt.) campaign, which brought in over $25 million.

Warren’s campaign hopes to be at $20 million when the quarter ends in four days, the email says.

The email itself includes more details (via email, so no link available).

As of this morning, we’ve raised a little over $17 million this quarter.

It will be nearly impossible to match last quarter at this point. But we need to start closing the gap as quickly as possible.

So they have lowered the bar from trying to beat or even match her campaign’s fundraising last quarter, at $24.6 million, to struggling to crack $20 million this quarter.

And of course her campaign is ignoring the embarrassing revelations about her cardboard cutout attending big dollar fundraisers in Hollywood and her own 2018 foray into wine fundraisers.

Elizabeth Warren is running an unprecedented campaign against the role of big money in the political process that relies on grassroots donations coming from people like you. And the majority of donations to her campaign come from emails like this one.

. . . . Elizabeth Warren doesn’t have wealthy donors in high-rise penthouses (or wine caves) or outside super PACs coming to save the day. She made the decision that those are not the voices that should decide the Democratic nominee.

Someone could use a billionaire wine cave. https://t.co/ZQqB1hz8lW

Looks like Warren will only be able to pay 1/1024th of her staff smh https://t.co/WFgCAaQIeZ

“Elizabeth Warren is running an unprecedented campaign against the role of big money in the political process that relies on grassroots donations coming from people like you. . , , Elizabeth Warren doesn’t have wealthy donors in high-rise penthouses (or wine caves) or outside super PACs coming to save the day. She made the decision that those are not the voices that should decide the Democratic nominee.”

“Why don’t you [George Bailey qua Granny Warren] go to the riff-raff you love so much ask them to let you have eight thousand [or 20 million]?”

Wanna raise some wampum? Sell your Okie crab dip at your rallies.

How can anyone be sure this isn’t another lie? I’ll be shocked if any statement is ever fact checked and found to be truthful.

Just raising money for her next senate campaign.

Money is less important than having a saleable message. Jeb Bush spent $100 million to get 3 delegates or 3% i forget which.

Gee, she takes big donor money, demonizes them, claims to refuse to take their money, after she already did, then wonders why the big donor dollars aren’t coming in to her.
Asking for a friend, do all these leftists have to pass a test of being insane before they can run or do they acquire their insanity the easy way through chemical ingestion?

Wouldn’t the smart money be on “She’s lying again”?

I’m actually surprised the cardboard cutout didn’t rake in the bucks. It’s such a perfect metaphor for her. Well, she’ll just have to go full FDR and follow a dumb idea with an even dumber one. Maybe try an inflatable dummy next.

The biggest gap we have to close is the one between our ears, for electing and reeleccting the corrupt rino garbage we collectively have. With the election of PDJT, it appears to be closing, but we need to make more progress. (Re Murkowski, romney and the like.)

Btw, in light of mccain’s complicity in the coup attempt, there should a movement to dig mccain out of Arlington.

I heard they went to dig him up and discovered the dirt was contaminated with urine, so they were unable to complete the task.

Watching the Dem candidates is like watching the worst NFL teams playing for next year’s #1 draft pick. The season is over so it’s now a race to the bottom.

Are you insinuating that Fauxcahontas might not be altogether honest??????

She has been sinking in the polls, so it is no wonder that her fundraising has declined also. If she doesn’t win, place, or show in any of the February states, she will be out by Super Tuesday.

Fuzzy Slippers in reply to notamemberofanyorganizedpolicital. | December 29, 2019 at 6:23 pm

Heh, yeah, I saw that, thanks. So many stories about leftist hypocrisy, so little time. 😛