Though Her District is an Environmental Disaster, Pelosi Heads to a Climate Change Junket in Spain

Though Her District is an Environmental Disaster, Pelosi Heads to a Climate Change Junket in Spain

Given the likely disaster for the Democrats next week, doesn’t it make sense to flee town? 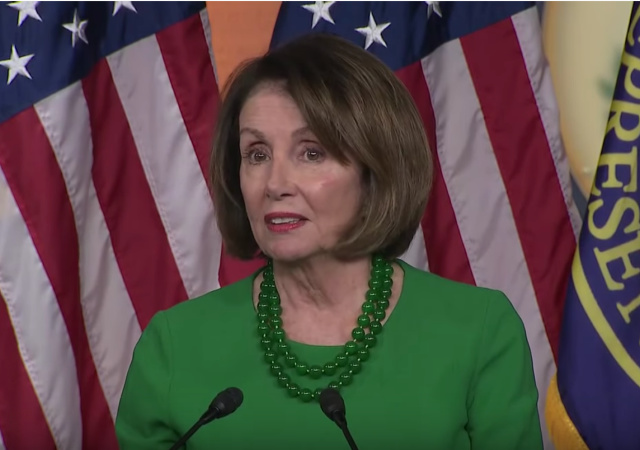 Legal Insurrection readers will recall that President Donald Trump’s EPA has slammed San Francisco, which includes the 12th District of Speaker of the House Nancy Pelosi, with potential environmental violations over its handling of sewage and wastewater.

However, instead of cleaning up the mess in her district, Pelosi is heading off to Spain for a climate change junket.

House Speaker Nancy Pelosi is jetting off to sunny Spain this week to talk about climate change — leaving looming issues like impeachment, federal budget appropriations and the USMCA trade treaty behind.

“Taking action to protect our planet is a public health decision for clean air and clean water for our children,” Pelosi said Saturday in a statement announcing her trip, which will be joined by 14 other congressional Democrats.

The annual international climate summit, also known as COP25, is the successor to the Fench-hosted summit that forced the Paris Climate Accord on the United States. After Obama forked out $500 million to the United Nations Climate Fund, upon entering the White House, Trump rapidly signaled his plans to end American involvement in the fiscal fiasco. Trump has since officially begun the process of freeing us from the agreement.

I anticipate our President will note Pelosi’s priorities during upcoming rallies, press gaggles, and Tweets!

Pelosi’s possible choice to visit Madrid would indicate her work in Spain is more important than at home where President Trump and his Republican colleagues have been pressing her to focus on important issues such as passing the US-Mexico-Canada (USMCA) trade deal.

In the campaign rally in Florida on Tuesday, Nov. 26, President Trump again lashed out at Pelosi, saying “she doesn’t want to give the people of our country a victory” by approving the deal that is an “incredible agreement.”

I want to point out that Trump’s policies look like they have already fixed global warming. San Francisco tied its historic record low temperature this weekend, so no need for Pelosi to go to Madrid and seek ways to control carbon emissions!

The high temperature in the city on Thursday was forty-eight degrees. That tied a record high temperature for the coldest date for San Francisco in the month of November. That record had stood unchallenged since November 27th, 1896, when it last happened.

According to the National Weather Service, the coldest high-temperature day ever in San Francisco was a freezing thirty-five degrees on December 11th, 1932. That day also holds the distinction for the coldest record low temperature ever recorded in the city, which is twenty-seven degrees.

Pelosi’s fellow Americans have noted that she is generating a great deal of climate hypocrisy.

Pelosi Flying out with Democrats to U.N. Climate Meeting in Spain https://t.co/Qt5sIPOkyD via @BreitbartNews – Guess they never heard of Skype. Just think how much carbon they could save if they used video conferencing. But then they couldn’t vacation on the taxpayers’ dime.

@WhiteHouse Please tell our POTUS that We The People do NOT want Nancy Pelosi SPENDING our $$$ to go to Spain to an event that the U.S. is No long part of !! This will be a Travesty if she is allowed to spend OUR hard earned money so she can get drunk overseas. Pathetic. #KAG.

However, to be fair to Pelosi, I anticipate that this week’s impeachment hearings will be another political disaster for the Democrats. It does make sense for her to flee town, get drunk, and savor the perks of being Speaker while she still can. Perhaps she and her delegation are the wisest Democratic members of Congress?

The state of Pelosi’s District does not matter. Her Serfs are addicted to voting D as one can be to heroin.

Democrat and republican patronage. Partying on our *%$# dime. I’d like to know the names of the people included on Pelosi’s junket. I bloody hate this sort of political graft. It really ticks me off.

Shouldn’t the passenger manifest be a matter of public record? If so, how does one find the list of names on the web?

I should’ve looked at the Breitbart link.

What about congressional staff and family members?

All Dems on this junket? Unfortunately, I guess the Rep’s will find some other trips to take on the taxpayers’ dime.

Reps should take a junket to pelosi’s district and work it like pelosi is working her Spain trip.
Contact local EPA equivalent people, issue a report on the dangers posed in her district to the locals and just generally make a mockery of her bs trips by writing up a huge report on her crappy district.
And PDJT should ban alcohol on all federal junkets paid for by taxpayers. That alone would probably keep pelosi from traveling on our dime, I seriously doubt she could refrain from alcohol for more than a couple hours.

Ah yes, the old “Do as I say, not as I do” from queen Nan. Her district could be declared a national disaster if Trump wanted to give her money to fix it. But he won’t and the voters there don’t seem to get it.

Though Her District is an Environmental Disaster, Pelosi Heads Flies While Burning A Lot Of Fossil Fuels to a Climate Change Junket in Spain
FIFY

This witch care nothing about anything other than lining her pockebook via her husband or her daughter, whether its insider trading or scamming back US foreign aid money to Ukraine, just like biden, john kerry, mitt romney and — obama. (We’re just beginning to see the depths of this guy’s depravity and corruption.)

Bill Clinton figured out this scam long ago by looting Haiti.

Is this surprising where the choice is between going to Madrid and chowing down on tapas at taxpayer expense or returning to San Francisco at her own expense and tip toeing through the shit. She was probably driven out of D.C. by the insanity of her party comrades Schiff and Nadler.