Van Drew also says that he was troubled by the leftward lunge of the Democrats: “I’m a proud capitalist” 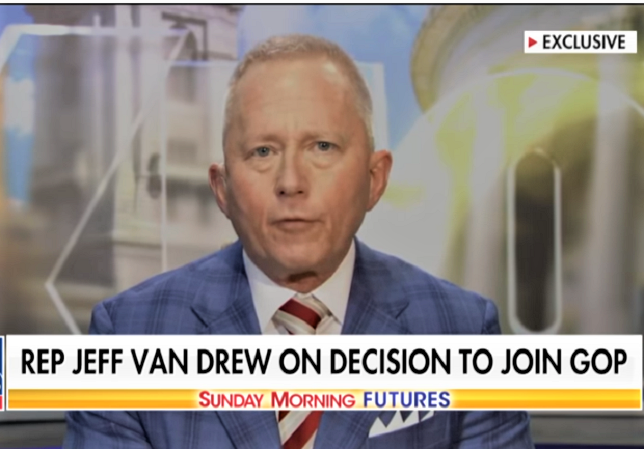 Last weekend, I blogged about then-Democrat Rep. Jeff Van Drew (NJ) deciding to switch to the Republican party.  He waited until after the impeachment vote and was one of the Democrats to vote against impeachment, but he has now officially become a Republican.

On Sunday, Van Drew appeared on Fox News to discuss his decision to leave the majority party and join the Republican minority.

He says that he has been troubled by the leftward lunge of the Democrats.

“The party is moving further and further to the left, where there is discussion of it being a socialist party. And I am a proud capitalist. I believe in hard work. I believe that we can give people opportunity, but that they also, when they get that opportunity, have to work hard to achieve success. You can’t give them success.”

He then says that the final straw for him was being told to vote for impeachment . . . or else.

“But the final sign for me was oddly enough actually in my home county when one of the county chairmen came to me and said, ‘I have to speak with you.’ I said, ‘Sure.’ He said, ‘I just want to let you know that you have to vote for impeachment … If you don’t, you’re not going to be able to run in my county.’”

This didn’t sit well with Van Drew who feels the impeachment articles are “thin” and “weak.”

“This impeachment is a weak, thin impeachment that just doesn't really mean anything much to most of the American people. It has been a long, dark, shadow on our country.” –@CongressmanJVD pic.twitter.com/cH0EN20D3A

Earlier in the week, Van Drew met again with President Trump and told him that the president had his “undying support.”  Trump thanked him and endorsed Van Drew on the spot.

He was so gracious, the way he complimented Maria Bartiromo and her style of reporting….

Well for how ever long it lasts, welcome to America’s side.

“I believe that we can give people opportunity, but that they also, when they get that opportunity, have to work hard to achieve success. You can’t give them success.”

But the Democrats have been giving their “clients” other people’s success through welfare and high taxation for decades now. Certainly it’s good that he’s seen the light, but really, what took him so long?

The Democrat Party has been so loopy for so loopy. Democrats so want to destroy our system that they’ve gotten to the point of calling the Constitution itself unconstitutional; they’ll do anything to upset the ordered liberty which flowed from the Founding Era.

“Let us face reality. The framers [of the Constitution] have simply been too shrewd for us. They have outwitted us. They designed separate institutions that cannot be unified by mechanical linkages frail bridges (or) tinkering. If we are to turn the founders upside down we must directly confront the Constitutional structure they erected.”

—An old lefty professor and advisor to lefty bigwigs over the yeas, James MacGregor Burns (191602014)

The democrat and republican labels are irrelevant, other than to label oneself someone who wants to remake the nation into george sorosland (with the attendant corruption and soviet style heirarchy), or one who wants to keep the nation as founded.

The republican party’s only problem is a lot of old garbage infesting it (the likes of romney, for example).

Whatever. I do not believe him.

The crux of the matter is that representatives are elected to represent those who elect them.

On the uptick, I don’t suppose that he has been a school teacher.

Another east coast republican romney and really only good for as long as he can hold the seat. Being loyal to DJT doesn’t mean the party will show him any love.

Hard to believe a card carrying member of The Party switches. (think “Romulan defector”) Is this a deep plant?….. Hardly Benedict Arnold territory.

It only has served to purify The Party.

The Party has manufactured a high crime for impeachment. But they have done that before…so what is new?

He will be replaced. Nice try to be a martyr.

I worked for a member of Congress who was trying to get someone to flip. There is no deep thinking involved here or conspiracy theory. People flip because they truly are not committed to the party cause. And if you look up these flips since America began, you will notice 2 things:

Jeff Van Drew hasn’t been in the House for even a year. Before that he was a state senator for a few terms but that’s not a full time job. His career really isn’t as a politician, it was as a dentist. It doesn’t surprise me that he was fed up.

I’m talking about House flips. Senate flips have weirder dynamics but you still don’t see many (R)s to (D)s.

Not my Congresscritter, not my problem.

Are you also a Constitutional Republican? No witch hunts. No warlock trials. Equal, not “=”. No cruel and unusual punishment.

Do we have a shortage of RINOs in congress? Who is he and what does where does he stand. Good that he is out of the DNC but his hands are out not for campaign funding and GOP support.

The standard for flipping parties should be Phil Gramm. Resign, then win the new party’s nomination, and stand for election again. Anything less means you don’t represent the will of your constituents.

First, given the vote for president and impeachment he was arguably aligning himself with his district better. Second … I wager if it had been a flip the other way you wouldn’t feel the same way.

Nice to find out he’s not a careerist… Thanks Colonel Travis.

Damn few of any Gop reps are worth their salt, so whatever.

Basically only a handful or less are seriously opposed to replacing us with foreigners.

Anybody notice how many gop govs are signing up for more refugees? The left is beating us at this opporunity Trump gave us.

I don’t trust anyone. Eh said.