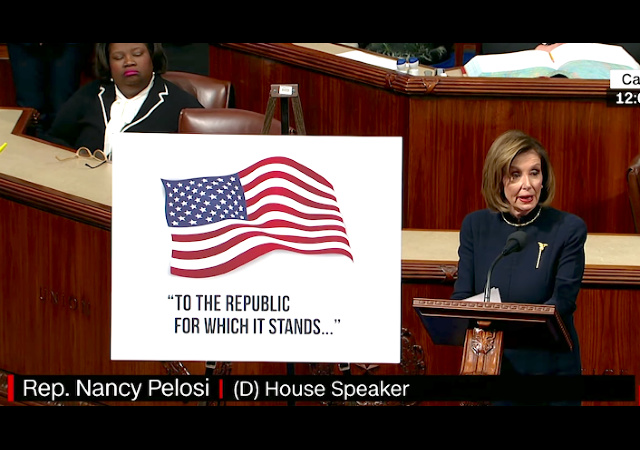 The Democrat-controlled House of Representatives has voted to impeach President Donald Trump.

The House has approved Article 1 – Abuse of Power after 216 representatives voted yea. They needed 216 yeas. 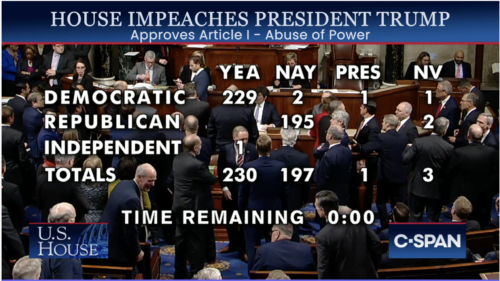 The House has approved Article 2 – Obstruction of Congress. Like the previous article, it only needed 216 yeas. 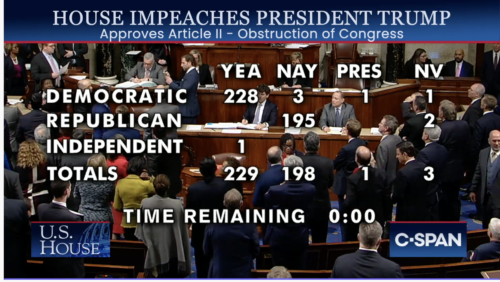 From the White House:

“Today marks the culmination in the House of one of the most shameful political episodes in the history of our Nation. Without receiving a single Republican vote, and without providing any proof of wrongdoing, Democrats pushed illegitimate articles of impeachment against the President through the House of Representatives. Democrats have chosen to proceed on this partisan basis in spite of the fact that the President did absolutely nothing wrong. Indeed, weeks of hearings have proved that he did nothing wrong,” the White House said.

The statement went on to call the impeachment a “sham” that denied the President “fundamental fairness and due process under the law.”

The White House further stated: “All of these antics make clear that Democrats have lost sight of what this country needs, which is a Congress that works for the people. Their boundless animus for President Trump fuels their desire to nullify the 2016 election results, and improperly influence the 2020 election.”

The glare Pelosi gave her caucus when some Dems started to clap after she announced the first article of impeachment passed pic.twitter.com/8vONZlEyZ3

Putin will go all out on Trump's behalf, again.

Both sides used strong hyperbole to make their case for or against impeachment. Here are a few highlights:

Rep. Sean Patrick Maloney (D-NY) – “It is the President and not any member of this House who has brought us to this sad place. His actions echo in this chamber.”

Rep. Jan Schakowsky (D-IL) – “He [her son] said, ‘Mom, this is not about politics, this is not about party,'” Schakowsky said. “And pushing back against my arguments, he said, ‘This has nothing to do with the final outcome. It is about doing the right thing even if others don’t.'”
(BTW, this conversation happened in June…one month BEFORE the July 25 call.)

House Majority Leader Steny Hoyer “said he never expected to witness such an obvious wrongdoing by a President of the United States.'”

Rep. Al Green (D-TX) stood next to the Time magazine photo of a crying child that many sought to connect to Trump: “If this president is allowed to thwart of efforts of Congress with a legitimate impeachment inquiry the President will not only be above the law, he will be beyond justice. We can not allow any person to be beyond justice in this country. In the name of democracy, on behalf of the republic, and for the sake of the many who are suffering, I will vote to impeach.”

Rep. Barry Loudermilk (R-GA) stated that Jesus had more due process: “Before you take this historic vote today, one week before Christmas, I want you to keep this in mind: When Jesus was falsely accused of treason, Pontius Pilate gave Jesus the opportunity to face his accusers. During that sham trial, Pontius Pilate afforded more rights to Jesus than the Democrats have afforded this President in this process.”

Some of the greatest in kind promotion ever for re-election ?

“F” the donks and their horses

Nancy Pelosi all dressed in black is nothing but a smarmy drama queen.

notamemberofanyorganizedpolicital in reply to Whitewall. | December 18, 2019 at 7:40 pm

People will not forget.”

Yes, it’s a Coven of Witches – they’re all dressed in this fall’s “Satanic Black.”

Nancy Pelosi is nothing but smarmy drama queen no matter what she wears.

Something that occurred to me….

They did all white for the one SOTU.
They love to do red to prove they live in A Handmaid’s Tale.
They pulled out the sever black for impeachment.

Forget world peace. If women ran all the countries, we would all have to dress for our emotions on any given day.

Bad news on the doorstep, I couldn’t take one more step. I can’t remember if I cried… the day our country died.

We are no longer a nation built of laws. The National Socialists are scofflaws, total disregard for the Constitution, for Due Process, any sense of decency, honesty is passe’.

the soap box failed because the Swamp refuses to listen.

the ballot box has failed because they refuse to accept the will of the people as expresssed by voting. see DJT, rent control in @Failifornia, etc, etc, ad nausem.

there’s only one box left, which is apparently the one the left is dead set on using. see Pantifa, doxing, attacks on people in public, kids getting beaten on school buses, etc, etc, ad nausem

Two boxes left. There’s still the jury box. And I wouldn’t rule out the ballot box until after 2020.

Note that the ballot box hasn’t failed because the elected officials refuse to submit. It has failed because a large number of the voters refuse to vote in accord with critical thinking, the facts, and the principles required for a free republic.

Unless we can return morality and educated decision making to the the majority of the electorate, any other actions to restore the Constitution will be inadequate.

Pelosi likes standing proudly next to a flag she is willing to burn rather than lighting a candle for the President like a good Catholic should.

I am not even sure she qualifies for Purgatory given what she is putting this country through. Methinks damnation is what this Judas will see.

notamemberofanyorganizedpolicital in reply to legacyrepublican. | December 18, 2019 at 7:44 pm

There should be Kars also because all the Klowns are there.

Here’s a bit of medicine for the DIMS poison.

Thought I saw an article that schakowsky’s tweet about her kid actually predated the start of impeachment. So another lying democrat on record.

In 1860 James Buchanan uttered, “I am the last president of the United States” as Lincoln was about to be sworn in as president.

I can’t help but wonder if 160 years later that may be coming true. There are just so many shocks and strains a country can take when the forces at play are from within the country… just as Lincoln also pointed out. Then it was a discrete battle over distinct territorial areas but this is a more inter-mingled conflict.

A nation cannot be survive half sane and half not. Half being rapid in hate. Half believing that anything they do will be better than what is and has been. Half devoted to a perpetually failed ideology that leads of mass suffering.

We are living in very interesting times.

Why do dems take these votes in the middle of the night?

“For every one that doeth evil hateth the light, neither cometh to the light, lest his deeds should be reproved.”

Prime viewing time from the propaganda wing of their party. It allows editing for political purposes.

Whosoever diggeth a pit shall fall in it.

Well, we knew this moment was coming. So what happens next? Will the House submit the articles to the Senate so we can get this over with, or will they sit on them for a while, to give the media more time to gloat about how Trump’s reputation has (supposedly) been blackened in the eyes of history?

Trump will rebrand this travesty and wear it as a badge of honor. In fact, he was already doing so during the Battle Creek rally.

All this vote has done is lit a fire under every Trump supporter.

Something about “a sleeping giant” and “a terrible resolve”?

And under everyone who wasn’t a supporter but won’t put up with this travesty.

As the saying goes, Jesus is coming and boy is he ticked.

notamemberofanyorganizedpolicital in reply to Comanche Voter. | December 18, 2019 at 10:22 pm

…and the Democrats can’t even FAKE being busy!

It started when Gore challenged the Florida vote; party over unwritten rules that stabilize the system. But that was just one corrupt guy.

Who knew that the Democrats were corrupt at a 99% level. I expected a lot of Democrat defections in favor of the system of government.

There was nothing wrong with Gore challenging the vote; Bush would have done it if he had been behind. What was wrong was never explicitly stated, but it was understood — the Dems’ purpose in seeking recounts was not to get a more accurate determination of what the voters had done, but to get another opportunity to alter votes. That’s why I maintain that had the recount been allowed to go ahead Gore would have won. People think that’s wrong because when the news media did their own count they found Bush had more votes, but that falsely assumes that the votes would have been the same after Dade and Broward got through counting them.

It’s not so much the level of corruption (though that is huge).
It’s that, after 0bama, the Dems truly thought (as evidenced by various articles in the MSM) they had finally achieved supremacy*. They thought they had reached the point where they could begin ignoring the constitution and elections and simply rule – as is their right (by the law of the progressive religion). They could do all the right things for the country, and bring about their utopia, where all the right people were in charge and they benevolently guided their lesser countrymen into enlightenment and beauty.

But, the country found its voice and said, “Nah, brah! We’ll take Trump, instead.”

(* “Supremacy”, as opposed to “superiority”, in the sense of “air superiority” or “air supremacy”. Air superiority means our air force can go where it needs to and accomplish its objectives with the right plan at a time of our choosing. Air supremacy means we can go wherever we want and do whatever we will anytime we want, without breaking a sweat. Air superiority still requires bringing along escorts, hitting air defense systems on the way in and out, etc. Air supremacy does not. Apply that analogy to our politics, and the Dems thought they had gone from superiority – they could advance the “arc of history” when they needed to, with the right amount of effort, including media propaganda, and swinging the votes – to supremacy – where they can simply do things because that’s what they think needs to be done.)

How long will it be until the next Dr Christine Blasie Ford enters the picture? Can be sure that Dems and msm just did not start plotting this today.

There will be a reckoning come next November. I wouldn’t be surprised if the Democrats lose more than 50 seats in the house.

From your keyboard to God’s monitor.

It’s a mark of honor for PDJT.

Pelosi should be hanged. Maybe we’ll get there one day.

notamemberofanyorganizedpolicital in reply to tom_swift. | December 18, 2019 at 10:20 pm

You mean since the DIMS Fired on Fort Sumter…..

As being the party that started TWO Civil Wars?

I’m sure they have several millions of votes ready to go, just a matter of redistributing them where needed. Republican in border states need to be vigilante about day voters. e.g. Illinois voters voting in Iowa

We can not allow any person to be beyond justice in this country.
Wow, if only that were true. A goodly chunk of Congress would be in prison. Some of the judiciary would be in the stocks, at the least. And a couple of recent past vice presidents would have been president.
And Trump would still the legitimate President today.