“Sen. Warren really has the zest and the grit and the gumption and the audacity that we loved that President Obama really embodied.” 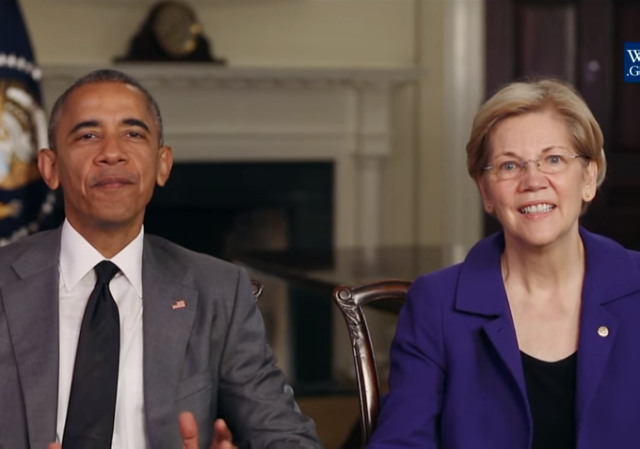 Obama’s non-endorsement of Joe Biden has been the subject of much speculation, but now things are getting even stranger. Hundreds of people who worked for the Obama campaign and administration are now backing Elizabeth Warren.

This is going to be extremely difficult for the Joe Biden 2020 campaign to dismiss as insignificant.

Hundreds of Obama Alumni Stab Joe Biden in the Back, Endorse Warren

Hundreds of Obama administration and campaign alumni are turning their backs on Joe Biden to support Sen. Elizabeth Warren (D., Mass.) in the Democratic presidential primary.

Former Barack Obama aides Sara El-Amine and Jon Carson collected more than 200 signatures from former Obama staffers endorsing Warren, CNN reports. El-Amine and Carson both worked on Obama’s 2008 campaign, but the group they assembled to publicly back Warren includes a range of officials from the Obama era.

This is not entirely unexpected. David Axelrod, one of Obama’s closest advisers, has been repeatedly critical of Biden’s performance in the Democrat primary debates.

Here’s more from the CNN report:

In an interview with CNN, El-Amine and Carson touted the “incredible diversity” of the group that has come out in support of Warren. The 200-plus names were collected in under a week, and they planned to continue growing the list, they said.

“We are a group that really uniquely knows that electability is self-determining and that oftentimes it’s the people with the boldest vision and the most unlikely candidacies early on who can really shift the field,” El-Amine said. “Sen. Warren really has the zest and the grit and the gumption and the audacity that we loved that President Obama really embodied.”

Warren has already jumped on this, of course:

I’m grateful to have the support of these Obama campaign alumni and my fellow Obama administration alumni. Their work changed what we know is possible in our politics. Together, we can win in 2020 and build a government that works for everyone. https://t.co/BPlavS9uSz

This Biden tweet from June hasn’t aged very well, has it?

So Barry has worked out his brackets and now declares Fauxcahontas as his pick. We know how that always works out. I wonder if this is a solicited endorsement?

“Please Barry! I need your kiss of death!”

notamemberofanyorganizedpolicital in reply to Pasadena Phil. | December 19, 2019 at 1:04 pm

Guess I wasn’t suppose to tell that secret!

Wait! Obama had ZEST?
I must have missed that minute of his administration.

Biden is too old, and it is evident in his lack of drive and his constant gaffing. But there’s also the fact that he IS corrupt. The Burisma and China scandals are there in the open, and the Democrats may be trying to cover for him but they know we are not buying it.
Joe Biden is damaged goods, and expired.

notamemberofanyorganizedpolicital in reply to Exiliado. | December 19, 2019 at 1:07 pm

And as totally corrupt as the Biden family is
Lizzy Warren is EVEN MORE CORRUPT!!!

That would be disgusting, but Democrats have proven time and time again that ‘disgusting’ is their main trait.

My Trump Campaign Slogan: “What is the alternative?” Not too catchy, but irrefutable.

Elizabeth just grates on my nerve.

I guess she really is a Trump lackey, but making America grate isn’t the slogan.

notamemberofanyorganizedpolicital in reply to Milwaukee. | December 19, 2019 at 3:53 pm