34 Republicans voted for the bill. 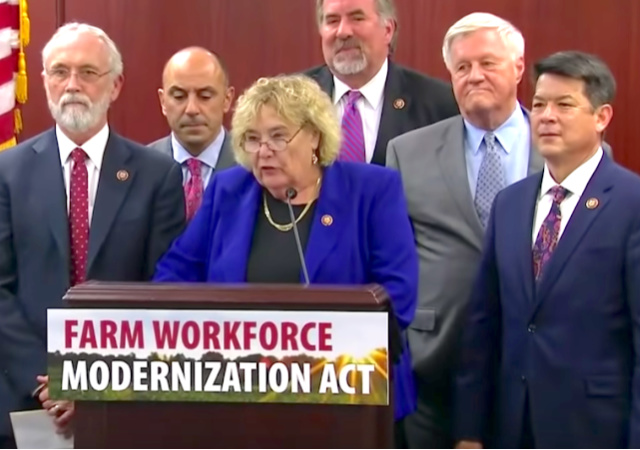 The House passed Farm Workforce Modernization Act with supports from both sides of the aisle. However, critics have blasted the bill since it contains language they describe as “large-scale amnesty.”

The bill provides a process for undocumented farmworkers to seek a temporary five-and-a-half-year “Certified Agricultural Worker” status if they have worked for approximately six months in the industry in the last two years.

That status can either be renewed indefinitely, or workers (along with their spouses and children) can begin a path to permanent legal status in the form of a green card. That path, according to the legislation, includes background checks and $1,000 fine.

To secure the green card, those who have worked in agriculture for 10 years or more must work for four more years, while those who’ve spent less than a decade in the sector would have to work eight more years. Once workers receive a green card, they are then free to pursue work in fields outside of agriculture.

The H-2A agriculture visa program also receives a boost. The bill cuts “processing time and costs for visa petitions.” It allows the “Department of Homeland Security to set up a pilot program that would give H-2A workers the ability to change jobs within the sector if they find work within two months.”

A few GOP representatives had other problems with the bill. Rep. Doug Collins (R-GA) did not vote for the bill, but said he would work with his GOP colleagues in the Senate “to improve on the existing proposal.”

Collins said the farm bill benefits large dairies but “would not have a meaningful impact on Georgia’s agriculture.”

But Collins also lashed out at the immigration language:

“While the 224 pages of H.R. 5038 make many more changes to the H-2A program — some good and some bad — one need look no further than the first few pages to figure out the real point of this bill: a path to citizenship for an unknown number of illegal immigrants who do some work in agriculture, along with their families,” he said at the Judiciary Committee markup last month.

He also said the bill’s document standards are low and could allow illegal immigrants with multiple DUI convictions and a history of Social Security fraud to get legal status.

This farm amnesty program is primed for fraud and is already being abused in its existing programs.

“…critics have blasted the bill since it contains language they describe as “large-scale amnesty.”

34 Republicans voted for the bill. Because there’s nothing like being stabbed in the face by those wearing your own uniform!

Hopefully this open borders bullsh!t will die in the Senate or on Trump’s desk. Good grief.

Chamber of Commerce wants cheap labor. Those repubs voting for the bill are undoubtedly bought and paid for by the Chamber.
My congressional district had a CoC toady, he was replaced by a liberal democrat who is pretending to be “unbiased”.
I’ve been sending nasty emails to her about her bs and always end the emails with my term for her – “political hack”.
I’m sure the staff already has me set to go to spam or junk mail, but it’s fun and refreshing.
Pretty sure she’ll go down to defeat. Like that idiot in Virginia Abigail Spanberger. I told her she and abby were in the America hating sisterhood and they’re both full of crap.

Are you by any chance in MI-8, Mike Bishop’s former district?

From a Breitbart article two days ago (not dying in the Senate):

But one of the bill’s GOP sponsors says President Donald Trump supports the amnesty. In the Yakima Herald-Republic, Rep. Dan Newhouse (R-WA) claimed:

This is exactly the kind of merit-based immigration reform President Trump has been calling for.

I spoke directly with President Trump about the Farm Workforce Modernization Act and the need for a solution for our farmers. He agreed: We must provide relief now. As the bill moves through the legislative process, I am committed to working with my Senate colleagues in order to send the best possible version of this bill to the president’s desk for signature.

The myth is that most illegals work in the fields, harvesting our crops. In fact, according to the Pew Hispanic Trust, only 4% of illegals work in agriculture. Ask any construction tradesman where the illegals are working. They know. If this legislation were to pass, I predict that half the illegals would magically obtain documents that they were farm hands. No one was more anti-illegal immigrant than Cesar Chavez.

I’ve been reading that the bill also discourages or outright prohibits using labor-saving machines that could replace the workers themselves. So we have gone full circle on slavery where we will now be the only “modern” economy dependent on stoop labor as our agricultural work force. It’s not slavery but it is certainly a way to preserve an uneducated, non-English speaking population while thwarting what America does best: innovate. And Republicans voted for this too eh?

Yep, this is the second huge problem with the bill. If the farmer just wants to avoid all the immigration stuff and buy a machine that can do the work faster and cheaper than workers it’s a no no.

So not only is there an amnesty the bill specifically encourages more forigen workers when how many Americans are out of work?

Where did you read about that? Bad idea to me, for health reasons among others.

Off topic, but very much bears watching: a Democrat state representative in Virginia wants to use the National Guard against those who resist the state legislature’s efforts to nullify the Second Amendment.

Civil War II may be closer than you think.

Speaking of off-topic, as I recall, Amazon demonetized Legal Insurrection…. Yet I see on the right column, that the LI Foundation says it gets credit for shoppers on Amazon.

What’s that about? Anybody know?

Heh, you beat me to it, RITaxpayer! 🙂

You need to get up earlier. [wink]

This is good to know. I need to see if one can do a split donation. I already use Smile for a leukemia fund. Why? Because your resident grizzly has it. A long0term form of it, but still.

This is a good question, and yet another great reason to subscribe to the LI newsletter. We (Professor Jacobson and the LI editorial staff and authors) all contribute, often with reminders about important things like this.

BUT if you haven’t signed up yet, the professor did post about Amazon Smile not too long ago on LI: https://legalinsurrection.com/2019/11/giving-tuesday-smile/

I hope this helps!

This is all well and good, but if Amazon demonetized LI once, I see no reason to expect it won’t do it again.

There are pundits who believe that they will offer to exchange amnesty for dropping impeachment.

Looks like the GOPe will cucks again. They really want to move left just slower. Even twenty years ago we would have charged someone who wanted to help a six year old to transition with child abuse. Now they are ever so brave.

That’s 34 fake Rs who need to be primaried.

Who here is running? Time is short.

You know, that is ONE good thing we have going for us, if we would avail ourselves of it — EVERY House seat is up EVERY TWO years….

Could rid of every one of those Est. types if we put our minds to it.

Those moderates are voting as such because they have calculated that enough of their constituents want them to vote that way.

They’ve done the math, but their predictions aren’t always right.

Wow! What a bunch of whiners! Someone is finally doing something meaningful to stop illegal human trafficking and instead provide a legal mechanism for the ag industry to employ cheap labor. The path to citizenship hardly seems like a free pass. I’m not in the ag industry nor did, or do I condone blanket amnesty, but get a grip! While it seems there are some kinks to work out (dui’s etc) I see a way to bring the labor in legally, vaccinated, fingerprinted, and above board. How can anyone think this is inferior to the status quo?!

It’s inferior to border security and vetting. That’s what we should be doing and aren’t. This means that part of the right just caved leftward in the face of the left’s ridiculous platitudes about immigration.

First problem, in my opinion, is only working in the field for 6 months out of the prior two years. Does that really make them ag workers? It seems to be a way to justify allowing people in to fill positions that would not get the sympathy helping the farmer does. Change that to 18 months, minimum 40 hours a week for the past 2 years and be required to maintain that level of agricultural work, in the fields and not in a agrochemical plant or for John Deere, for the next 8 years and I would look at it differently.

Well except for Americans. As usual they get screwed, but what is important are we meet the goals of the Uniparty.

We need to build the wall, get the system in place and then set up a system that allows migrant workers to fuel the ag industry. In the mean time, this would take the “illegal” out of the equation and be a good way to stop the profits that the cartels, human traffickers, politicians and everyone else who profit from keeping the labor subservient by the threat of deportation. It’s a system of servitude by extortion. Complain and get sent home.

You can’t just stamp your foot or wiggle your nose and magically all of these workers… poof! are gone and replaced by technology or teenagers willing to put down their phones in exchange for pitiful pay.

I’m impressed they are trying to make the workforce legal.

I actually agree with most of what you said, but you lost me at the end of making the workforce legal. They’re still illegal immigrants in this scenario and unvetted for disease/criminal activity.

I mean legal only in the sense that they come in the front door and that we know their names, run their criminal records, vaccinate them and know who they work for. I don’t like the amnesty but suspect they need it to pass it. It is not exactly a free pass on the amnesty either. Additionally, it seems a brilliant move by Trump as Hispanics are moving to him in record numbers and he needs the farmers to be re-elected. It seems a good segue to me to move towards a sensible transition into a legal, common sense way of utilizing cheap labor where it is needed. If Trump doesn’t get re-elected it is a mute point as Dems will resume the invasion.

Will it be abused, sadly yes because our politicians suck, but it is a move in the right direction away from the evil system that exists today.

Why would LI put the info that 34 republicans voted for the bill but not give us a list of those republicans?